Welcome to the future, where we all have miniscule attention spans. Many of us prefer channel surfing to watching an entire program. Many of us put five CDs into our changer and hit the "random" button so we don't get bored listening to an entire album. Some of us even change lovers more often than my editor Ryan Miller changes his Underoos™ (Note to Ryan: Just because they have super heroes on them doesn't mean your underpants are super resistant to odor!). What's my point?

The Hot & Cool Orchestra is the perfect band for the short-

The quartet doesn't bother with playing one genre of music--you might get bored! Instead, they skip between Gypsy folk and tangos and jazz and zydeco and Western swing, evidenced on Red Beans & Caviar, their brand spanking new CD that's being released on Saturday, Jan. 5, at the next Red Barn Community Music Series concert at Red Barn at the South Bay Community Center in Los Osos at 7 p.m. (come early for a 6 p.m. potluck if you like). A $10 donation is requested at the door.

Copies of the recently completed full-length 18-song version of the new CD will be available for purchase during the concert. Consisting mostly of originals, the CD also features a few select covers by the likes of Johnny Cash, Zachary Richards, Stephan Grappeli and David Grisman, Larry Unger, and F. M. Alvarez. Stellar musicianship, especially by fiddler Allan Dick, makes this recording something special.

Rock Sisters Productions is ready to light a fire under O'Reilly's Bar & Grill in Grover Beach this year.

# "My mom used to say that however you started off the new year was an indicator of how the rest of the year would go," said promoter Leanne Phillips. "So, she'd cook us a really great meal every New Year's day with the idea that it would bring us prosperity throughout the year. If my mom's theory can be applied to live music on the Central Coast (and I think it can), then we've got an amazing year of live music ahead of us for 2008 because we're certainly starting the year off right this weekend."

On Saturday, Jan. 5, Still Time will play what lead vocalist and guitarist Dan Curcio says will be their first ever show in the Five Cities area! Their song "High Tide" has been in New Rock 107.3's regular rotation for more than a year and held a spot in the station's Top 10 for more than four months. I also named the band's debut full-length CD one of my top 10 albums of the year, so they gotta be kick ass! The show starts at 9:30 p.m. and the cover is $5.

Sam Harris is too good looking. In fact, it's hard to take him seriously as a performer because he looks like a GQ model. But the vocalist and star from the CBS hit comedy The Class is a captivating song stylist who can belt out the blues, Broadway hits, pop sings, and jazz standards like a consummate pro.

# On Saturday, Jan. 5, Cal Poly Arts presents Harris at 7 p.m. in the Spanos Theatre, with a hosted artist reception in the lobby immediately following the concert where Harris will meet, greet, and sign autographs.

This star of stage, film, and television has earned raves from performances everywhere from the White House to Carnegie Hall to London's celebrated West End, and his recent role on the CBS comedy The Class inspired popular columnist Liz Smith to write, "Sam Harris is the comic breakout of the television season!"

Some readers may remember the tails and sneakers-clad Harris as a breakout star on Star Search, but anyone who wants to know more about him can read Christy Heron's interview on page 33. Sounds like somebody has a crush

Dying all the way to the bank

Grammy-nominated act As I Lay Dying returns to Downtown Brew 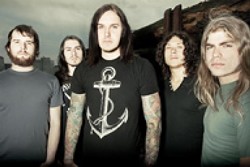 # this Tuesday, Jan. 8, riding a wave of popularity that shows no signs of waning.

Last summer, the group released An Ocean Between Us, and has sold more than 100,000 units already. They've also racked up some impressive stats, selling out or nearly selling out every show, playing the Vans Warped Tour and a European headlining tour. They won the San Diego Music Award's Artist of the Year (beating Jason Mraz and Switchfoot), not to mention that Grammy nod for Best Metal Performance on the song "Nothing Left."

Openers include Still Remains, Evergreen Terrace, and August Burns Red for this 7 p.m., 16-and-older show. Tickets are $17 advance at Boo Boo's and the venue.

On Friday, Jan. 4, the San Luis Obispo First Presbyterian Church presents the first Noontime Brown Bag Concert of the year with "A Touch of San Luis Obispo Little Theater." You'll meet new executive director Wendy-Marie Foerster as she presents musical selections from SLOLT's last season and a preview of 2008. Doors open at 11:45 a.m. and this year's half hour concerts will begin at noon. As usual, they're free and take place in the church's Wilson Hall, at the corner of Marsh and Morro. For more info, call the church office at 543-5451.

Can you hear that train a-comin'? That's the Jerome Washington 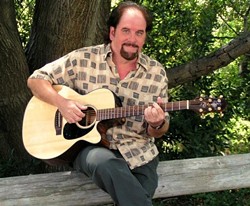 # Express pulling into Old Cayucos Tavern on Friday and Saturday, Jan. 4 and 5, for a couple nights of Chicago-, Texas-, and Detroit-style blues. These two nights and another at the Tavern on Feb. 2 are the build-up to the band's Thursday, Feb. 28, CD release party at the Frog and Peach, when the Express reveals its Live at the SLO Vets Hall recording to the public.

Latin jazz combo De La BahÃa performs Saturday, Jan. 5, from 7:30 to 10:30 p.m. at the Inn at Morro Bay. Featuring the vocals of Maite and the jazz stylings of pianist Larry Arone, bassist Clint Iwanicha, percussionist David Solis, and drummer Mike Raynor, the group is perfect for listening and even better for dancing.

California native and Americana folk singer-songwriter Mike Lopez brings his original tunes to Linnaea's Cafe on Saturday, Jan. 5. Born and raised in Santa Barbara, Lopez is part Native American--a Chumash of the Kalawashaq Village--and he embraces the multicultural aspects of his deep roots. Check him out beginning at 8 p.m. for this kid-friendly show.

On Sunday, Jan. 6, the Famous Jazz Artist Series begins a new year with trumpeter Don Rader, former featured soloist with the bands of Stan Kenton, Count Basie, and Woody Herman. Central Coast stars Dylan Johnson (bass) and Darrell Voss (drums), as well as concert co-producers Charlie and Sandi Shoemake (piano/vibraphone and vocals), will join Rader for two performances: 4 p.m., for $15 7:15 p.m., for $12--or see both shows for $20. Call 927-0567 for reservations.

The monthly West Coast Songwriters Competition is moving to a new location in 2008. Beginning Sunday, Jan. 6, at 6:30 p.m., the event will be held at The Clubhouse. As usual, there's no cover for this all-ages event where you can see local and regional songwriters competing to perform the best tune. This month's judges include veteran sideman Gary J. Steinmann, bassist for many Central Coast bands, including The Cinders, Al Millan & The Robots, and Monte Mills & The Lucky Horseshoe Band. Cuesta College student and singer-songwriter Travis Bland, as well as Santa Maria Sun Arts Editor Shelly Cone will also judge. Come check out the area's hottest songwriters showcasing their newest material.

Midwestern ukulele player and storyteller Marc "Lil' Rev" Revenson returns to the Central Coast with a couple performances sure to tickle your ears and funny bone. Not only can he pluck a mean uke (and mandolin, banjo, and guitar, for that matter), he's also a champion blues harmonica player who specializes in folk, rags, blues, and old-time country tunes. See him on Sunday, Jan. 6, from 2 to 4 p.m. at Congregation Beth David Temple ($20 at the door $10 for students) or Monday, Jan. 7, at 7 p.m. at the Steynberg Gallery ($15 at the door).

Consider this a quick heads up, because on Thursday, Jan. 10, Pato Banton and Eek-A-Mouse will share a double bill at Downtown Brew. Advance tickets are only $20, so pick up yours today at Boo Boo's or the venue.

INFOBOX: Gone but not forgotten

Malik Miko Thorne is taking a break this week, but his CD reviews will return to New Times' music pages next week. Happy New Year!

Glen Starkey admits that alcohol is not the answer, but it does make him forget the question. Remind him at gstarkey@newtimesslo.com.