What's in a name? Little Theatre kids tackle 'The Importance of Being Earnest'

As author and playwright Oscar Wilde wrote, “The truth is rarely pure and never simple,” and the same can be said of love, at least the way this Irish man tells it in the classic late 1800s comedy The Importance of Being Earnest.

This intellectual farce is currently showing at the San Luis Obispo Little Theatre, courtesy of the young adults in its Academy of Creative Theatre program. 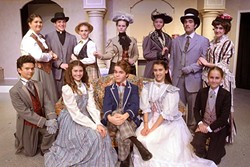 It’s the typical, but oh so enjoyable he-said-she-said story with our two leads, society men and chums Jack Worthing (Jed Authier) and Algernon Moncrieff (Isaac Capp), doing anything for love and getting in quite the predicament in the process. Jack fills the role of the guy trying hard to do the right thing while Algernon is constantly acting on his whims, whether it’s eating all the muffins at an inopportune moment or inventing a dying friend to get out of dinner plans.

Set primarily in Algernon’s pillared sitting room in London and Jack’s rose filled garden in the country, the crux of the story is that Jack has created a fake, no-good brother for himself, so that he may be good-time having Earnest in the city and responsible Jack in the country. Adding to the theme of double identities is the choice to double cast many of the ladies’ roles, so your viewing experience may vary.

When Jack musters up the courage to propose to his beloved Miss Gwendolen Fairfax (Linnaea Marks, Sam Mucciacito), she tells him she’s always dreamed of marrying a man named Earnest (so relatable), leaving him in a quandary of how honest to be with his intended. But the lovers have other obstacles to happiness: Gwendolen’s mother, Lady Bracknell (Alyssa Mickey), won’t sign off on the marriage until Jack, who was lost as an infant at a train station and later adopted, can come up with at least one parent. Though the show, directed by Shelagh Garren (who toured nationally with the late Debbie Reynolds in The Unsinkable Molly Brown), focuses on adult themes like love, matchmaking, and marriage, its cast is made up of middle- and high-school kids. Still, given the elements of deception, drama, and furious diary writing, the age discrepancy between the characters and the actors doesn’t pull you out if the story.

Meanwhile, Algernon is intent on meeting Jack’s young and pretty ward, Miss Cecily Cardew (Sophia Lea, Penny DellaPelle), even though his friend has explicitly forbidden it. So naturally Algernon pretends to be the fictitious Earnest and leaves for the country. Things come to a head when Algernon, Jack, Cecily, and Gwendolen all end up in the country together. Uh oh. Will true love save the day?