What's in a score?

Locals reflect on 20 years of New Times in SLO

"We believe and no doubt always will that San Luis Obispo County is a unique place in which to live, that it has a rich and vibrant past, a fun-filled present, and a bright future.

"We also believe those of us fortunate enough to live here need a publication that truly reflects the special lifestyle, sophistication, and spirit of the region." 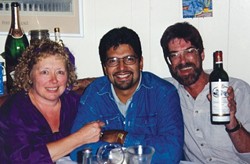 # With these far-reaching words, New Times put down its first roots in the SLO County community. Twenty years ago this week on August 13, 1986 the first issue hit the streets, after a frenzied all-night marathon in a cramped SLO-Town apartment as meteors streaked across the starry sky.

Today, the free alternative weekly newspaper has a palpable presence in the hearts and homes of more than 100,000 readers each week. It's an interdependent relationship that has endured, and matured, ever since those early issues when the soy-based ink stained the hands of readers, whose blackened fingers then made their mark on the smudged pages. As many local observers talked to for this story agree, New Times has helped shape our community, and our community has helped shape New Times.

"We've always been a paper to allow any view to be printed. If it's good, relevant, and factual, it's part of our community," said New Times Art Director Alex Zuniga.

He's been responsible for the design of every issue since walking into that Swazey Street apartment late on that fateful August night two decades ago, when as a newly graduated Cal Poly graphic communications major he helped founder and editor Steve Moss and former advertising director/co-publisher Bev Johnson put together the first paper. 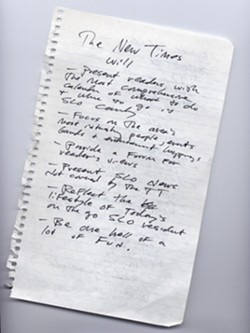 # "It's always been willing to publish controversial topics and local news in-depth, it allows the local community to put their fingerprint on the news by venting their opinions, and it covers the whole entertainment spectrum. It's delightful. This community likes it even the students," added Settle, who's also a Cal Poly political science professor.

According to original co-publisher Johnson, "New Times brought San Luis Obispo County together. It gave San Luis more of a personality of its own. Before [New Times], it was disjointed. There wasn't a personal connection with any media. Steve [Moss] said it gave us a sense of community."

Arts and entertainment events in the New Times calendar in those early days also served to promote the locals creating those events, who then put on more events, which were in turn listed in the calendar.

"New Times was really important in the beginning, important to us in the theater, music, and art world," noted Linnaea Phillips, owner of Linnaea's Cafe on Garden Street in SLO and a regular advertiser since the first issue.

"I was the first [business] to put art on the walls, outside of a gallery. Once the word got around, through New Times, more people started to think it was possible to be an artist in this town. And with the word out, we were able to bring folk music back to life, played here by local musicians even though people were saying, 'Folk is dead,'" Phillips said.

It didn't take long for hip, cool people to start picking up each issue to find out what was going on in this "fun-filled" community. But readers also wanted news of local current events, which began to fill more pages.

That first issue's news coverage reflected important events of the day. One write-up covered a Cal Poly faculty boycott of the campus El Corral bookstore a protest against Cal Poly Foundation's investments in apartheid South Africa. Another story and photo offered details of a colorful, consciousness-raising highway billboard created by artist Corita Kent, which declared, "We can create life without war."

"Steve [Moss] always wanted to tell the readers what was going on in the community," Zuniga said.

The paper's initial readers also welcomed the quickly growing opinion section including letters, cartoons, Brezsny's astrology, "personals" ads, and a column titled "SLO Relief." A letter in the first issue complaining of a dearth of live music and dancing venues for the over-30 crowd was answered in the next issue by someone recommending the Motel Inn. Another early letter raved, "New Times is a knock-out! That's real class! You have demonstrated what can be done with foresight, talent, industriousness, and good management."

The "SLO Relief" opinion/humor column in the second issue talked about ribs the county's "latest craze," and noted, "A recent article in the San Francisco Chronicle labeled SLO 'The Capital of Outdoor Barbecue,' which is not such a bad thing. We could have been singled out as 'Capital of Intermediate Road and Surface Street Construction' or 'SLO: Home of the Pylon.'"

Five years later, the Shredder made his/her debut, dishing out a witty, irreverent tongue-lashing to any public figure deemed deserving. Hands trembled as local officials warily opened each issue to see if they'd been shredded, and the collective sigh of relief from the city hall and the county courthouse on Thursday mornings was audible.

"New Times has done a marvelous job of keeping people in the community on their toes. It shines light into some of the dark corners in the community. They're telling stories that need to be told, and they're not as heavily influenced by their advertisers as other media might be. Steve Moss was pretty fearless," said former county supervisor David Blakely, adding, "I was the subject of many peccadilloes in the paper, but I usually deserved them."

After 10 years of publication, New Times editor and founder Moss made this observation:

"What astounds me more than anything: Each week we take some things as insubstantial as ideas and give them form. This is very different, to me, from creating things like cars or houses or pieces of furniture. Eventually, the ideas for these end up as cars and houses and furniture. But the idea for a newspaper eventually becomes something whose entire purpose is to give birth to more ideas. And to spread them around. There's something magical about that. It makes us feel like crazed wizards every week."

Feedback from readers of these ideas over the years has also helped define what they consider to be an appropriate edge for an edgy publication. Years ago, for example, an "adult services" ad featuring a popular local stripper named Catalina was deemed too risque by some readers, and the revealing photo taken during a Penthouse photo shoot was removed.

A more recent example: "New Times got its ears pinned back a little bit after publishing the meth recipe [in February 2006]," noted local history professor John Ashbaugh, who said he's made a point of picking up every issue since the beginning.

"The dust has settled now, and we can go back and say, 'Yes, that was dumb.' But New Times has redeemed itself. Like any good marriage, you realize there are idiosyncrasies in New Times that have to be tolerated. But we depend on New Times to get the facts out," Ashbaugh said.

"It's hard to imagine San Luis Obispo without New Times. The two are clearly linked, after 20 years. New Times clearly has a place here, and has been able to sustain itself even after a huge outpouring of anger from some readers and advertisers," he added.

SLO Chamber of Commerce CEO Dave Garth is looking forward to another two decades of investigative journalism and in-depth reporting of local issues.

"They misspelled my name in the first issue, and that set the tone for our relationship for the next 20 years," he quipped.

For Zuniga, the paper's art director, the community has definitely shaped New Times.

"It's like a family member," he said. "There are ups and downs, and dysfunctional issues going on. You can be mad, you can make mistakes, but you still like each other."

For him, from its humble beginnings to today, the paper's weekly creators have been as important as its readers.

"We've had so many great people come through, in all departments. We get the best out of people through positively challenging them it's not necessarily bottom-line driven. We're lucky to have the combination of people who can turn out the paper every week, on time, looking good, being interesting, thousands of times," he said.

Nearly a year and a half after Steve Moss's unexpected passing, Zuniga said that he can finally feel good about his years working with the paper's founder, rather than feeling sadness about his death.

"We have a lot of potential to keep getting better. We're not done yet. Steve developed the philosophy and feel of the paper that we want to maintain: If it's important, accurate, and relevant, it should be in the paper. It's a recipe that's always worked."

Kathy Johnston wrote her first New Times cover story in 1988. Over the years, she's served as a New Times reporter, calendar editor, copy editor, and proofreader. She can be contacted at kjohnston@newtimesslo.com.