If you’re like me, you like both kinds of music—country and western. And what’s not to like? Let’s peruse, for a moment, some of my favorite country song titles: “All the Guys that Turn Me On Turn Me Down,” “Am I Double Parked by the Curbstone of Your Heart?,” “An Old Flame Can’t Hold a Candle to You,” “Are You Drinking With Me Jesus?,” “At the Gas Pump of Love, I Got the Self Service Pump,” “Beauty is Only Skin Deep, but Ugly Goes Clean to the Bone,” “Billy Broke My Heart at Walgreens and I Cried All the Way to Sears,” “Did I Shave My Legs for This?,” “Don’t Roll Those Bloodshot Eyes at Me,” “Don’t Drop Kick Me Jesus (Through the Goal Posts of Life),” “Four on the Floor and a Fifth Under the Seat,” “Get Off the Stove, Grandma, You’re Too Old to Ride the Range,” and “I’ve Been Flushed to the Bathroom of Your Heart.”

I’m not sure if you’ll hear any of the aforementioned gems this Sunday, March 28 during the Twang N Bang II at the Frog and Peach from 4 to 10:30 p.m. (21-and-older; $2 cover starts at 8 p.m.), but you will hear such bands as Cuesta Ridge, Pennyjar, Red Eye Junction, the Sons of KD Elder, Blackwater Union, The Ghosts of Guadalupe, the Tolbert Family Band.

Okay, here’s a couple more gems: “Redneck Martians Stole My Baby,” “She Got the Gold Mine and I Got the Shaft,” “She Looks Good Through The Bottom of My Shot Glass,” “Thanks to the Cathouse, I’m in the Doghouse with You,” and “You’d think my Bed was a Bus Stop, the Way You Come and Go.”

The Brew comes through

If you thought because the students were gone that Downtown Brew was going to lay low for a week, you’d be wrong. This Thursday, March 25, hear Fall of Troy and its experimental prog punk (7 p.m.; all ages; $12).

This Saturday, March 27, there’s a triple bill show with Soundhouse headlining (7:30 p.m.; 21-and-older; $5 at the door). Soundhouse is “a rock cover band from the Central Coast that includes accomplished musicians Erik McCornac (lead vocals), Andy ‘The Mad Brit’ Shellcross (bass), Mark Doolin and Bill Doty (guitars), and Jason Meece (drums). Among these five musicians, they have 135 years of experience and they cover modern rock, ‘80s techno, ‘90s grunge, classic rock and pretty much whatever is in between.” Supporting acts include hot-chick-fronted cover act Minka and awesome grunge/rock/metal act Sad Lisa.

On Tuesday, March 30, check out Reel Big Fish with Fighting Chance opening (7 p.m.; all ages; $16 presale or $18 at the door). Ska-punk act Reel Big Fish hails from So-Cal and followed on the coattails of acts such as Sublime and No Doubt. They garnered an underground following in 1997 when their single “Sell Out” became a modern rock radio and MTV favorite.

Guitar great Robert Longley will present an evening of jazz, flamenco, and classical guitar on Friday, March 26, at 8 p.m. in the Steynberg Gallery ($10). He continues to tour in support of 2007’s Diaspora, his ninth release. Longley also composed two powerful soundtracks for films that screened at the Sundance Film Festival.

Amy Obenski returns to the area this week delivering her original music that draws inspiration from jazz, classical, rock, and R&B. Her newest album From the Deep, features grand piano, cello, viola, bass, drums, mandolin, and even accordion. “I’ll be back for a much awaited return to Linnaea’s Café, this time, with my cello player, who has been an amazing addition to the music,” said Obenski. See her Friday, March 26 at 8 p.m.

Backup Johnny hits Mr. Rick’s on Friday, March 26 and the Frog and Peach this Saturday, March 27. Formed in early ‘07 by Joey Romley (vocals/keys) and Brett Mallard (drums), with Tyler Evans on guitar and Nick Romero on bass, their first album—Heartaches and Hangovers—featured popular tracks such as “Faster, Pussycat!,” “Thanks But No Thanks,” and “Charlie Oates.”

Christy and Bill Starling, formally Tempted, will play classic hits as the Stellar Band from 3 to 6 p.m. this Saturday, March 27 at the Fuel Dock. Listen to some tunes, grab a drink, slide out the door and check out the Farmers’ Market right outside on Main and Harbor.

Jazz chanteuse Margie Nelson play the Steynberg Gallery on Saturday, March 27 (7:30 p.m.; $10). According to her bio, “Nelson will lull you into a romantic mood with soft, silky, smooth, sweet, and smoky ballads, or get your hands clapping and toes tapping as she cuts loose and swings like the best of them.”

The FM Outlaws play Mr. Rick’s this Saturday, March 27 at 9 p.m., bringing their thundering awesome-osity to the beachside club. According to their bio, “After meeting Allen Woodward at Steel Records Recording in Fresno, bassist Alex Buntin wasted no time calling Corey Whitehead to notify him that a great set of pipes had found its way to the studio. Corey quickly called friend and drummer Gary O’Meara and announced that he had some last-minute additions to bring in to their jam session scheduled for later that day. Not more than a few hours after the initial call, the FM Outlaws were having their first practice. The chemistry was there from the start, and since forming the band, has been adding classic after classic in their repertoire.”

Two is better than one! See for yourself on Sunday, March 28 when the “Dueling Pianos and Other Musical Treats Concert” features Mozart’s Canon in D Major, performed by Hilary Anderson and Deborah Marcus, on two side-by-side Boëndorfer grand pianos. The piece takes about 20 minutes to perform and is considered very difficult. Also performing will be a piano, cello, violin trio, and vocal duets by Jayne Cohen and Rouvaishyana. This special event takes place at 3 p.m. in a private San Luis Obispo home with limited seating and includes refreshments and a silent auction that benefits the Jewish Community Center of SLO. Tickets are $50 (call Jody Belsher at 542-0808).

Bob & Wendy and Charles Duncan team up this Sunday, March 28 at 3 p.m. for a free show at The Steynberg Gallery. “This show will be the first time we have worked closely with Charles Duncan since he produced our Behind the Blue album,” said Bob. “He’s been making the rounds of songwriter showcases and never fails to impress with both his songwriting and delivery.”

Holly Hofmann (flute) and Bill Cunliffe (piano) play the next the Famous Jazz Artist Series concert at the Hamlet this Sunday, March 28. The internationally known duo will be performing selections from their numerous recordings including their latest release, Three’s Company. Series co-producers Charlie and Sandi Shoemake (vibraphone and vocals) will also appear. There’s a 4 p.m. show for $15, a 7:15 p.m. show for $12, or see both for $20. Reservations are recommended: 927-0567.

Mark your calendars for next Thursday, April 1 when you can witness the amazing Los Lobos with the equally amazing Leo Kottke! They’ll both be at the Performing Arts Center for a special acoustic performance, where Los Lobos will be supported by Kottke. Los Lobos is wrapping up a new record of original content, and they recently released Los Lobos Goes Disney—a not-so-kids album featuring 13 reinvented classic Disney tunes. (9 p.m.; tickets are $36 to $48; call 756-2787).

Glen Starkey’s writing a new country song called “You Broke My Heart So I Broke Your Ear Drum With This Song.” Help him with the lyrics at gstarkey@newtimesslo.com.

Mose Allison—The Way Of The World

Like Alan Lomax, Joe Henry has become a modern recorder of legendary musicians, a guiding hand for reclaiming an artist’s stature. And similar to Rick Rubin’s Johnny Cash sessions, Henry strips away the tendency for over-production, leaving an organic, natural setting, which suits Mose Allison perfectly. It’s been 12 years since Allison sat behind a studio microphone, and though his elastic vocals have diminished a bit, he still retains the sly wit and happy-skipping vocal phrasing. Opening the album, Allison re-works Willie Dixion’s “My Babe” into “My Brain,” a humorous ditty on his continual cerebral dexterity. The resonance of Monk gets evoked on “Crush” as Allison gets a moment to dazzle you on the ivories. The album ends sweetly with a duet with singer and daughter Amy Allison on “This New Situation.” Throughout, Allison seems comfortable and intuitively sharp in his delivery, with a fluid, rhythmic swing presiding over the entire 12-song set. 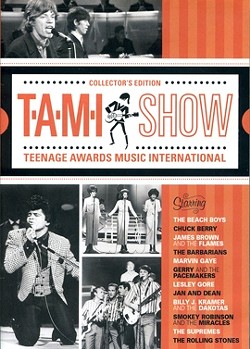 Bootlegs existed but even these became rumors. In October 1964, a teen award show, filmed live, captured a quintessential moment in American rock and soul history, then criminally fell out-of-print. Captured at the Santa Monica Civic Auditorium in a five-hour-long continuous shoot, The T.A.M.I. Show happened just once, but it was the first real concert film of its style, and brought out future Hall of Famers. Chuck Berry tears through “Johnny B. Goode,” flanked by go-go dancers with 3,000 high school teens screaming their lungs dry. Edited live, this isn’t a lip sung affair. You see why Smokey and The Miracles were as smooth as black velvet; they were slick, clean, and choreographed. Every part of this film is an eyeful, from the bikini-clad and twiggy-looking go-go dancers to the youthful vibrancy and sweat-shined foreheads of baby-faced artists including the Beach Boys, The Supremes, Marvin Gaye, with the whole affair ending with the Rolling Stones. But the standout is James Brown’s four-song set. He puts on a showcase dancing, dripping sweat, escaping his cape to sing some more. In an instant, you understand why he is truly one of our greatest legends.