What's the 511? Two local informational support lines work to get the word out

To local motorists in the area, Oct. 16 is a day that will go down in infamy.

OK, maybe not infamy, but it will be remembered as a day when traffic got really, really bad on Highway 101. After inland storms brought flash floods to areas along Interstate 5 and Highway 166 and caused road closures, traffic from those highways—including a whole lot of semi trucks—poured into the Central Coast and created one of the more memorable non-accident and non-fire traffic jams for local residents. 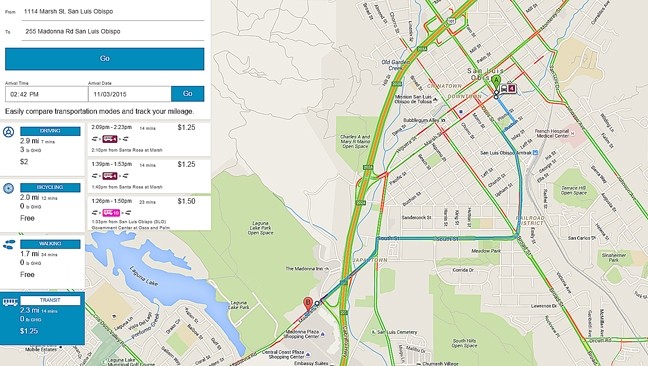 It was a patience-testing example of how traffic events elsewhere can influence traffic in SLO County. It was also an example of why it may be useful to get real-time data about where the traffic is backed up—in a fashion more detailed and precise than Google Maps—so the cunning motorist could reroute and find a way where traffic may not be as backed up.

That service already exists in San Luis Obispo County, but many don’t know about it, yet. All you got to do is dial 511.

By dialing 511, those preparing to travel or in the midst of a trip can get information on road conditions, vehicle density, and roadside assistance, as well as assisting in ridesharing and trip planning.

The program, which is mandated by the federal government and exists throughout the United States, started in 2009 in SLO County, said Stephanie Hicks, program manager for SLO Regional Rideshare and public information of the San Luis Obispo Council of Government (SLOCOG).

It was the first 511 assistance hotline launched in a rural area in the U.S., following those up and running in metropolitan areas, where this type of service gives motorists much more options for avoiding congested areas.

Since being launched, however, it’s taken time to get things in motion.

Hicks said part of the challenge is that there is a lot to accomplish, and few resources, as traffic funding has been very tight.

“It was sort of one of those unfunded mandates that was passed on down from the federal government,” Hicks said.

The service has thrived in the Bay Area and Los Angeles because those areas have robust, well-funded transportation agencies. While SLOCOG and SLO Regional Rideshare have brought in state and federal grant funding, it’s still an expensive, uphill battle, forcing them to prioritize resources.

Early on, the plan was to focus on a partnership with 211, a program operated by the United Way of San Luis Obispo County that provides referral assistance for several services relating to mental health, homelessness, food insecurity, and support for low-income populations. The collaboration provided transportation planning for low-income populations—and still does. At that time, SLOCOG saw that their mission—a collaborative effort to increase general transportation mobility, in part by reducing traffic congestion and increasing traffic circulation—would be better achieved by emphasizing their rideshare offerings.

“While most regions were dealing with increasing congestion and traffic, obviously that wasn’t our issue at that time,” Hicks said.

But, as time went on, congestion increased and Caltrans began changing how they collected and delivered information.

Little by little, the program evolved to also be a resource for motorists who need quick, real-time information. In 2010 they put up the blue roadside signs advertising 511. As the program continued on, both the amount of traffic, and the way traffic was monitored and tracked, changed.

The program still provides personalized service to those using 511 for transportation help, and has also adapted to improve their comprehensive resource offerings. As smartphone use increased and on-the-phone support took a backseat, SLO Rideshare saw that there was a need to increase online services.

“We were supporting a very expensive telephony system, and not such a good Internet offering,” Hicks said. “So we needed to put more emphasis on web platform.”

A recent intensive overhaul of the Internet-based rideshare support service made it much more user friendly, especially for smartphones. The website has a trip planner that takes into account anything from traffic impediments to public transportation options. It will also give you the cost of each option, helping people find the most economical approach to get form one place to the other.

This new Internet-based offering has worked well so far.

“It’s been a good hub of transportation information for the region as a whole because it is so multimodal,” Hicks said. “It’s not just about ‘why is there traffic backed up on 101?’”

The perennial challenge, though, is getting people to use it. 511 has stepped up outreach, and most recently they have keyed in real time data from Highway 227 south of San Luis Obispo, where rush hour brings a long string of commuters that never seems to end.

For 211, the outreach has also been a challenge, said Rachel Cementina, director of community engagement at the United Way of San Luis Obispo County.

Cementina said that 211 is not widely known about, especially among the communities that may most benefit from it.

If the revered El Niño comes to the area—bringing a barrage of rain, flooding, fallen trees, and downed power lines with it—then 211, not 511, may be the place to call. That program has a working relationship with the county’s Office of Emergency Services, and will be giving real-time updates on storm-based information. Cementina says that 211 will be a preferable service then, over the more well-known 911.

“In the event of a disaster, 211 will be updated with information so that people who just don’t know what to do don’t need to call 911 and clog up the 911 line for [more serious] emergencies,” Cementina said.