What's the next hot new wine?

One local winemaker is casting his vote for Grenache Noir

Can you guess which varietal will be California's next hot new wine? If you have the answer to that question, most winemakers' would trade you a case of their flagship wine to learn of it in advance. But there's one young Edna Valley winemaker who's pretty confident he knows exactly which wine it is: Grenache Noir. Usually labeled simply as Grenache for store shelves, Domaine Alfred winemaker Fintan "Fin" du Fresne says that when he introduces his estate grown Grenache to sommeliers for the first time, they get downright excited about it. 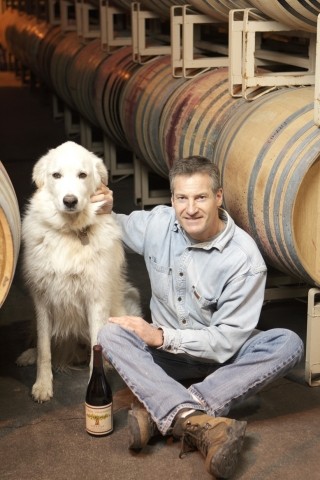 # "The Central Coast is really the only part of California that's growing Grenache in any quantity, at good wineries in Paso Robles, Edna Valley, and Santa Ynez Valley," du Fresne noted. "Somms (the easily pronounced moniker for sommeliers) see 100 Pinot Noirs, but probably only see one or two Grenaches in a week. There are only three dozen or so wineries doing a varietal Grenache, unlike everybody and their brother doing Pinot Noir."

He made a solid point. More wineries use Grenache as part of a cuve e (blend) rather than as a stand-alone variety, and you'll find delicious blends from Tablas Creek, Qupe , Curtis, and Zaca Mesa. If you've noticed my pick of the week lately, you know that I'm quite a fan of this delicious variety that many winemakers describe as having a raspberry liqueur character. I love that flavor. Of course, the topic of Grenache as a stand-alone variety intrigued me now that there are several outstanding versions being made by Central Coast Rhone specialists.

"Alban and Beckmen are the leaders of the pack, and Tablas has an incredible Grenache," du Fresne said.

The latter will be bottled on its own with the 2006 vintage. The first two wineries have long been admired for their estate grown varietal Grenache, which was like nothing we'd ever tasted before. Ironically, there was plenty of Grenache around, but it was grown in the Central Valley where it was allowed to over-produce, resulting in insipid, pink wines best described as plonk. With a laugh, Du Fresne compared Grenache to a weed: "It's incredibly vigorous and a varietal that requires the most work."

After speaking with du Fresne, I called on some of my favorite Grenache producers to see what they had to say.

Now, it's being planted in better growing areas than it originally was and there's increased interest, he said. It's more recognizable, but it's still not mainstream, more of a niche variety. Twelve years ago, Beckmen recalled, it was difficult to sell, but it's gaining in popularity.

"Grenache is a really appealing, accessible grape that has lightness and sexiness," he said. "It's textural and voluptuous, but not tannic like Cabernet or Syrah."

"In a cool year, it's difficult to ripen, and it comes in really late," he said. "It takes a lot of work to grow it well, but it'll grow just about anywhere."

His neighbor, John Alban of Alban Vineyards, agreed that parts of the cool Edna Valley region are at the limit for growing Grenache.

"There are parts of this region where there's heavy, volcanic soil and a small part on chalky, sandier soils. There are parts on steep, terraces and more parts on rolling hills. There are situations when it may prove too cool and times when it's too hot," Alban pointed out. "But you could apply that to every grape variety."

Vine maturity was one factor that everyone noted.

"Vine age is very powerful with Grenache, it gets markedly better," said Alban, adding that some might argue the next hot variety is Grenache Blanc.

"As long as the next new hot wine is a Rhone variety, that's all right with me," he said.

It's a barrel of fun!

Roll Out the Barrels is May 1 through 4, Thursday through Sunday. This annual wine festival is one great event I hate to miss, and I rarely do. It's a great series of tastings that begins Thursday night, May 1, with Barrels in the Plaza at SLO's historic Mission Plaza downtown, featuring "locally grown, locally made" artisan products from specialty purveyors and chefs like Cal Poly Organic Farm, Charter Oak Style Meats, Epic Catering, Giovanni's Fish Market, Sweet Earth Organic Chocolates, and Tiber Canyon Olive Oils. Of course, it's the wineries that draw us to this celebration in the first place, and this year's lineup includes Baileyana, Claiborne & Churchill, Edna Valley Vineyard, Kelsey See Canyon, Kinton, Kynsi, Laetitia, Ortman, Per Bacco, Salisbury, Saucelito Canyon, Sextant, Tangent, Tolosa, and Wood. Tickets will be available at the gate, but get there early or you may be left standing outside. The Barrels in the Plaza event offers great wine and food, and there's live entertainment and a barrel-making demonstration. Even better, it's affordably priced at $25 per person, so everyone can enjoy this party in the plaza.

On Friday, May 2, the winemaker dinners take place, and it's best to contact the makers directly to make last-minute reservations. Don't wait long.

Claiborne & Churchill has teamed up with Tolosa for a dinner prepared by Chef Jose Dahan at the new Courtyard by Marriott in SLO. The hotel is offering discounted rates to guests who also book a room that night, and you might need it after six courses and eight wines. Call 544-4066 or 782-0500. Kynsi offers fine wines paired with dinner on the patio at Novo--call 541-3083. Laetitia offers dinner at the estate house with Chef Ty Tolbert of Wine Cottage Bistro--call Carmine at 474-7657. Per Bacco will pair some of its highly limited wines with Italian cuisine at Cafe Roma--call 787-0485. And Wood Winery will be at Lido in Shell Beach for an educational and entertaining multi-course dinner--call 489-9662.

The passport tasting takes place along the wine country trails of Arroyo Grande and Avila and Edna valleys on Saturday and Sunday, May 3 and 4. This two-day wine event includes the aforementioned wineries and Wolff. For only $50 per person, $40 for designated drivers, each winery offers new releases, library wines, food, and discounts on wine purchases. Some of them will have live entertainment and games like soccer and bocce ball. They usually sell out, but it's not too late to order your tickets so you can join the fun.

You can get more information about the annual Roll Out the Barrels wine festival by calling 541-5868, or buy tickets in advance at www.slowine.com and at Taste, the vintners' associations downtown SLO tasting room at the corner of Monterey and Osos streets, 1003 Osos St. Call 269-TASTE for more information.