Another bike art show rolls through May

Bike parts are everywhere: a bucket of front forks, a pile of frames, a box of brakes and derailleurs and chains and sprockets. Half a dozen men confer amidst a welder and various power tools. Then Bill Mulder suddenly grabs a bike frame and wrestles it to the ground, holding it down as Tom Smith attacks it with a reciprocating saw, cutting off the tubes that would hold a back wheel in place.

Bill and Tom are members of the Tall Bike Posse, a group of modified-bike aficionados who weld one bike frame on top of another to make bikes five feet or taller. Why? Because they’re weird and they love bikes and they know how to make stuff. 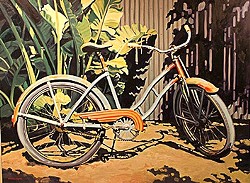 It’s Sunday, April 18, and I’m at the Bike Build hosted by members of the Tall Bike Posse at Central Coast Brewery in preparation for Bike Month and “Bike Momentum: A Chain Reaction of Art and Advocacy,” a month-long bike-related art show at The Atascadero Bike Lane Gallery

“It’s in the old Coast to Coast hardware store,” says Tom. “We start on Saturday, May 1, with a 2 p.m. ‘Bike to Banners!’ ride. Fifth and eighth grade students did all the banners we’re hanging up around town, so we’re going to ride around and look at them all, and then we go to the gallery where this kid death metal band called Right of Asylum is going to play.”

The kids of Right of Asylum weren’t sure what to make of Tom’s interest in their band.

“One of the members said to me, ‘Mr. Smith, there’s a problem.’ ‘What’s that?’ I asked. ‘Do you know what kind of music we play?’ ‘Yeah,’ I said, ‘Rrrraow, rrrraow, rrrraow!’” says Tom, doing his impression of a death metal singer. “That’s what we want.”

There’s going to be entertainment every Thursday, Friday, and Saturday at the gallery starting with indie-alternative rock by The Clydes & EjiTZ next Thursday, May 6, at 8 p.m.

“We’re also going to have an underground event: a pixie bike demolition derby,” said Tom, but to find out about that you’ll need to show up at the gallery, find someone in the know, and get the lowdown.