When it rains, it pours: Three events 60 miles apart challenge the laws of physics

Sometimes San Luis Obispo feels a little bit like Pleasantville—for all the wrong reasons. Nothing to do, except visit the bar for the six hundred thousandth time since moving here. Nowhere to go, except possibly the beach for the seven hundred thousandth time since moving here. Don’t get me wrong: I like the beach. But would it really be so terrible for the Central Coast to conjure up a Saturday night in which I feel compelled to clone myself to make sure I don’t miss out on any of the ridiculously cool antics and revelry?

I guess I’ll find out Saturday night … unless you’re reading this after Saturday, March 29, in which case, I guess I already know what it feels like and I’ll give you a full report in next week’s Art Bash.

It all started when I was invited to Cal Skate Roller Derby’s double header taking place Saturday, March 29. Despite the fact that I get a complete kick out of driving to the Paso Robles Event Center to watch Central Coast Roller Derby kick all kinds of fish-netted ass, I’d yet to see roller derby in Santa Maria. Plus, I will say yes to just about anything so long as it gives me an excuse to drive to Las Comadres for pupusas and other delicious Salvadoran food.

So, my Saturday night was happily accounted for: pupusas and athletes with names like Dolly Thrasher—who, according to Facebook, is playing her final bout with the league this Saturday—racking up points and hits. What could be better?

But then I received an invitation to Dance Craze! Rock & Soul Dance Party taking place the same night at the Madonna Inn. I don’t know whether you’ve noticed this or not, but for all its merits—sunshine; smug, happy people; hugely inflated housing prices—San Luis Obispo does not present many opportunities for dancing fools such as myself. That is, I’m not much of a dancing fool, but I would be if I had more opportunities to throw on a ’60s prom dress and twist myself into the floorboards at the Madonna Inn.

At this point, I was doing some basic math in my head. Two really cool events, but only one of me … carry the five … solve for x … yup, looks like there’s a problem. But I could stuff my face with pupusas, go to Cal Skate Roller Derby’s first bout at 5 p.m. and part of the second at 7 p.m., and race back to SLO in time to get a few twists in before the night’s over. What could be better?

Then I received an invitation to Central Coast Roller Derby’s second event of the season, a double header at the Paso Robles Event Center pitting Paso Aggressive against The Damned Undead Bettys and A-Town Asylum against the Broad St. Brawlers. Of course, CCRD’s bouts are at the exact same time as Cal Skate’s, and the distance between Santa Maria and Paso Robles is 62.6 miles according to Google Maps. Something was going to have to give. 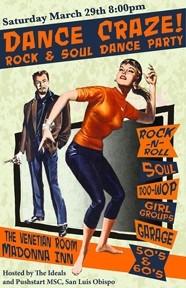 But whatever you do on Saturday, March 29, just don’t sit at home complaining about how there’s nowhere to go and nothing to do. Because with Dolly Thrasher and Blaque’N DeckHer as my witnesses, you couldn’t be more wrong.