When the rains are not enough

In a region where scientists are projecting a permanent drought, how do we meet rising demand with dwindling water resources?

# When record-breaking winter rains began pounding the parched Central Coast, sighs of relief quickly turned to chagrin, then alarm at the deluge's intensity. The reaction was reminiscent of what happened last fall in Southern California, when the Santa Ana winds arrived as a warm breeze on the back of the neck, turned blistering, and then fueled firestorms that raged through summer-baked forests and cities.

Despite the recent rains, some scientists project that California, and the West as a whole, are on the verge of a permanent drought.

The first reports published late last year in Science, and also by the National Oceanic and Atmospheric Administration (NOAA), predicted that the already semi-arid West can expect 10 to 20 percent less rainfall by the middle of this century.

Led by researchers at Columbia University, the study, based on 18 computer models, predicted a permanent drought--meaning permanently dry conditions--by 2050 throughout the Southwest and West. The Intergovernmental Panel on Climate Change has also issued reports containing similar projections.

According to the U.S. Drought Monitor, a compilation of data from several federal agencies that's updated weekly, all of the Central Coast was experiencing a moderate to severe drought as of Jan. 22. In fact, most of California was.

So what does this mean right now for the rain-soaked--and drought-stricken--Central Coast?

"I'll be the first to admit that we don't know if this rainfall or the drought that preceded it are directly tied to global warming," said William Preston, a professor of geography at Cal Poly in San Luis Obispo. "We can say for sure that the demand for water is growing. We can say for sure that temperatures generally are increasing, which will add to the pressure."

Christine Tague, an assistant professor of hydrology in the Donald Bren School of Environmental Science and Management at UC Santa Barbara, would have rather seen a steady rain than the downpour she watched fill drains and streets on its way to the ocean.

"When you get a lot of rain, unless that rain falls as snow, you lose a lot of it as runoff," Tague said.

She pays closer attention to the Sierra Nevada range: "What really matters is what's happening in the Sierras, because that's where most of California gets its water," she said.

"Any one year doesn't tell you anything," she said. "It's really trends through time."

Plus, regardless of the heavy snowfall this winter, the snowpack is undergoing a gradual decline overall, she said.

"Last summer, we had a big meeting here at the [UC Santa Barbara] Bren School on energy and water, and we got a lot of policy makers from Sacramento. People are recognizing that climate change is impacting water. The awareness is there," she said.

Cal Poly's Preston is paying closer attention to temperatures, too.

"Even if we got all the rain we needed right now, most of that water is going to run off into the sea and fill the reservoirs," he said.

One of his students studied the average temperatures of San Luis Obispo for the past 100 years and found they had risen 3 degrees Fahrenheit.

"Temperatures are one of the most determining elements of any kind for the study of climate," Preston said.

Temperatures affect the winds and how much water the air and soil can hold, he explained. A few degrees of difference in temperatures can be beneficial to some crops and disadvantageous for others, he added, noting that the rule of thumb is that for every rise of 1 degree in temperature, agriculture moves 60 miles north.

"The one common denominator we can assume is that it puts additional pressure on water because there's more evaporation. And with higher temperatures, plants--be they natural or domesticated plants--usually work harder, so they need more water," Preston said. 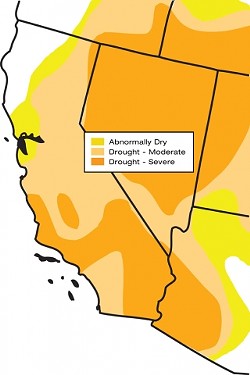 # His student's homework on San Luis Obispo temperatures track with what a team of scientists from the Lawrence Livermore National Laboratory, UC Merced, and the National Center for Atmospheric Research reported this winter: an increase of more than 2.1 degrees Fahrenheit between 1915 and 2000 in California.

A report from Environment America this winter projected less frequent but heavier storms throughout most of the Western states. It mirrored reports from the Intergovernmental Panel on Climate Change and other organizations on the anticipation of extreme downpours and also extreme drought conditions ahead.

The heavier rains are the result of warming temperatures because of the rapid formation of heavy clouds from faster evaporation of water over land and oceans.

Reports of a gradual decline in snowpacks in the Sierras and in the Rocky Mountains have a direct impact on California, since the Sierras provide much of the water for Northern California via snowmelt to the Sacramento-San Joaquin River Delta. The Rockies feed the Colorado River, which provides water to much of Southern California. Currently, the flow of the Colorado River is the lowest it's been in more than 80 years.

This has become the stuff of fierce political debates that, for example, are now pitting California and other states against the federal government in a lawsuit to force federal agencies to help states mandate lower carbon dioxide emissions that contribute to the warming trend.

Closer to home, however, conversations don't revolve around the theories of climate change so much as how much water is on hand. Right now.

The scramble for more

Words like "alarming" have popped up in recent reports from the Nipomo Community Services District describing its rapidly dwindling potable groundwater supplies. The community might run out of the resource as soon as within the next 12 years.

The district's board in December agreed to pursue two potential answers: buying water from Santa Maria at a cost of $15 million or more, and building a desalination plant that would remove the salt from seawater as a long-term option for $100 million-plus.

"The short-term solution is buying water from Santa Maria. We're still working out all the details on that," Peter Sevcik, a Nipomo Community Services District engineer, said.

Desalination seems to be the only readily available drought-proof answer.

"It's still expensive, but when the option is no water, it's a viable option," Sevcik said.

The specter of permanent droughts has made the topic of turning ocean water into tap water suddenly more popular, especially following a court ruling in December that will restrict the amount of water pumped from the Sacramento-San Joaquin River Delta.

# Santa Barbara built its desalination plant after the state's last five-year drought, which ended in 1991. The cost to run it was prohibitive, and it was essentially mothballed, but not dismantled. Officials now describe the plant as an "insurance policy."

Morro Bay went through essentially the same process, building an "emergency" desalination plant in 1991 that's been used only sporadically since.

Voters in the coastal town of Cambria approved plans for their own desalination plant in 2000, but it has run into opposition from the Coastal Commission. In all, some 20 California towns have been looking into the idea recently.

In Southern California, proponents of a massive $300 million desalination plant are hoping to break ground later this year on a facility just north of San Diego. Opponents have filed lawsuits over potential threats to ocean life and concerns over the high amount of energy needed to operate it.

Then there's the "toilet-to-tap" option that suddenly isn't appearing as distasteful as it once was. The Orange County Water District in January started up the world's largest plant for turning treated sewage into drinking water.

The district plans to inject the treated water into its groundwater basin to stave off the threat of saltwater intrusion and also have an extra supply of drinking water on hand, according to that water district's reports.

In San Luis Obispo County, low-flow toilets and other smaller-scale water conservation measures will be on the agenda when the local Sierra Club chapter and other environmental organizations host a series of meetings with water district officials in San Luis Obispo and Los Osos during the first week of February.

The recent heavy rains didn't postpone what has become an increase in attention to the local role in global climate change.

Cal Poly and UC Santa Barbara are hosting a four-day series of "Focus the Nation" workshops featuring a roster of climate change and water conservation experts who will discuss how to develop local strategies to cope with climate change. A Day of Youth Climate Action is also scheduled for Feb. 2 at UCSB.

In Santa Maria, agriculture interests welcomed the winter rains and spoke cautiously about whether another dry summer is ahead, following what the California Department of Water Resources called a "dry" 2007 and a "wet" 2006 for the state.

"It is too early for forecasters to make bold projections with regard to drought conditions, even though we had a dry winter," said Ruth Jensen, a national board member of American Agri-Women and immediate past president of the Santa Maria Chapter of California Women for Agriculture.

Taking care of the land

Everyone who eats has a stake in agriculture, said chapter co-presidents Kari Campbell-Bohard of Rancho Laguna/Laguna Produce Sales, and Lisa Bodrogi, a land-use planner for Teixeira Farms.

Campbell-Bohard said that farmers have become much more sophisticated in the use of water-saving irrigation and other practices.

"We are our environment," she said. "We must take care of it."

More reservoirs to capture and store winter rains would seem an obvious answer to increase water resources for agriculture in dry months, but not if "you face opposition from people who live downriver. It's a very hard balancing act," Campbell-Bohard said. "There really isn't a simple solution to it."

With the recent rains, the Nacimiento Reservoir has gone from a low of holding about 28 percent of its capacity to about 48 percent. The municipalities of Paso Robles, San Luis Obispo, Atascadero, Templeton, and Cayucos plan to build a 45-mile, $178 million pipeline to address water issues.

"The native Californians were hit hard," he said. "They had to change village sites to where there was permanent water. The stature of Californians went down about four inches, which archaeologists said was the consequence of poor economic conditions and disease.

"Humans had nothing to do with that," he explained. "That's what nature has in store."

Now, of course, the new factor to consider is the role of humans--and their technology--on climate change.

"For those of us who are concerned about the future, about our children's future, I would like local government to entertain the possibilities of some of these scenarios playing out, not necessarily to rush into it, but to do studies and make suggestions," Preston said.

"What I like about it is most of the things that have been discussed that might help us absorb climate change have a multiplicity of benefits," he said. "It's kind of a no-regrets policy."

Reducing emissions would improve the "health of the air," he said. Protecting marginal lands would protect the watersheds.

"We ought to protect the soils as much as we can," he said. "Soils are a buffer to climate change, as well."

And climate change is occurring, he said.

"Can we know how much of the change is natural and how much is human? Not for sure. It doesn't matter," he said. "The argument about what's the cause is less important to me than that it is occurring, and we damn well better start to adjust to it."