Ailey II's got a story to tell 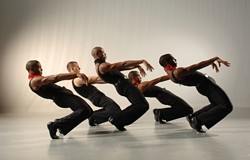 # William Blake wrote songs of innocence and of experience, exploring the complex relationship between youthfulness and knowledge. This dichotomy appears frequently in art as creators seek to magically interweave the fresh spirit of the young artist with the practiced hand of experience. Alvin Ailey discovered that formula when he founded Ailey II, a dance company created with the purpose of bridging the gap between the student dance experience and professional performances.

Ailey II is a secondary company, 16 years younger than the Alvin Ailey American Dance Theater and featuring less-experienced members--though the performers have learned to channel their youth into expression, to articulate the ambition and opportunity of an artist who still has a lifetime to explore the craft.

Ailey, a dancer and choreographer, was born in Rogers, Texas, and moved to New York, ultimately establishing the Alvin Ailey American Dance Theater in 1958. Born from a performance by a group of African-American dancers at the 92nd Street Young Men's Hebrew Association, the company is now comprised of 30 powerful dancers with decades of experience and has been led by Artistic Director Judith Jamison since 1989, when Ailey died.

Ailey's legacy began in 1969 when he founded the Alvin Ailey American Dance Center to help make dance accessible to students of all ages. The school currently offers a junior program for youth ages 3 to 15, a pre-professional program for ages 7 to 17, a professional division for ages 16 to 25, and a BFA program offered in conjunction with Fordham University. The center also offers open classes for dancers of all ages and abilities. Ailey founded the Ailey II troupe in New York City in 1974.

According to Troy Powell, associate director of Ailey II, dancers range in age from 19 to 24 and are hand selected from the Ailey school. The dozen current company members hail from hometowns as diverse as St. Petersburg, Fla. San Fernando, 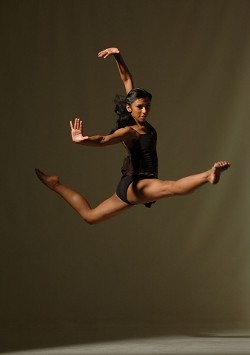 # Calif. Manitoba, Canada Berlin, Germany and Chapel Hill, N.C. For two years, they rehearse, travel, and perform with the company.

"It's a training ground for two years, and within that two years they not only get to perform, they get to travel, they get to do a lot of outreach, they get to teach as well as work, as well as perform in big theaters and big universities. That teaches them, during their time with Ailey II, how to be professional on and off stage," said Powell, who's worked with the company for nearly seven years.

For these youthful dancers, being professionals means traveling seven months out of the year--a calendar supplemented by a grueling rehearsal schedule. Classes run from 10 to 11:30 a.m. and are followed by rehearsals from noon to 6 p.m., five days a week. Traveling amends the rehearsal schedule, but not the amount of sweat they pour out in a given day. While traveling, they have class from 3 to 4 p.m., rehearsals from 4 to 6 p.m. and performances between 8 and 10 p.m.

Powell has noticed in recent years that many young dancers need to be taught to express themselves while performing, especially given the emotional breadth of the Ailey repertoire. But learning to draw from their emotions doesn't mean pretending or articulating someone else's experience.

"This generation, dancers are expressing themselves more as young artists," Powell said. "And I think that's the unique thing about Ailey II, that these dancers have goals, have dreams and--at this stage in their life--are expressing that through performance and using their experiences and being hungry and being passionate about what they do. They have something to aspire for, and when they're on stage, you see that inspiration." 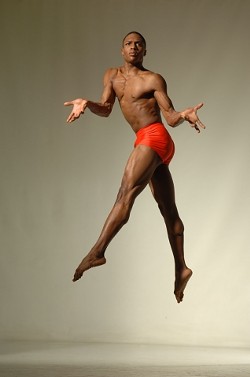 # It's often difficult for a single dance organization to sustain itself, but Ailey II is an example of how a secondary company has managed to thrive. This success may be at least partially attributed to a humanistic repertory. During their two performances in San Luis Obispo, the troupe will present a half-dozen pieces, each one complex and thoughtful.

"Celestial Landscapes" examines the turbulence and upheaval of the grieving process. "When Dawn Comes" details the uncertainty and beauty of the approaching day. "Revelations" is a tribute to African-American heritage. The company will also perform "The External Knot," which Powell choreographed. He intended for the dance to convey a struggle to overcome society's external trappings and knots, as dancers physically leap toward freedom.

But, Powell said, "Ailey Highlights II" best illustrates the company's humanity and beauty. The highlights feature excerpts of dances that Ailey choreographed between 1958 and 1984. Each piece tells its own story, carving out its own slice of humanity with every leap and twirl.

"We start out with a section from a larger piece called Blues Suite, which is the first ballet Mr. Ailey choreographed," Powell said. "That section is about five guys trying to escape the city that they live in to better their lives, and they're trying to get this train to the bigger city. And Mr. Ailey was from Rogers, Texas, from the South, grew up in a small town, and wanted to better his life. His mother wanted to better his life by moving him to Los Angeles, California. That has significance in his life. That tells a story about how you come from a small city and then move to a big city to better your life for whatever you want to do: be a dancer, a choreographer, a teacher."

# Another section, "House of the Rising Sun," features three women trapped in a house, determined to escape. Members of an African village interact affectionately and violently in "Hidden Rites," which boasts themes that reappear in "ISBA," which traces rituals of courting and matrimony with vivid tribal African overtones.

"A lot of these excerpts are very theatrical and have memories of [Ailey] growing up in Rogers, Texas, and experiencing these different things in his life and putting them on stage," Powell explained. "I think that those dances are definitely considered highlights because people can relate to each and every one of them, whether it be the choreography or the music. A lot of people don't understand that Mr. Ailey was very theatrical so he told stories onstage that people can relate to and be moved or touched by."

INFOBOX: Get 'em before they're gone!

Ailey II will perform on Feb. 10 at 3 and 7 p.m. at Cal Poly's Performing Art Center. Tickets cost between $32 and $38. The 7 p.m. show is sold out. Cal Poly Dance Professor Moon Ja Minn Suhr will host pre-show lectures at 2 and 6 p.m. For more information or to purchase tickets, visit www.pacslo.org or www.alvinailey.org.