Where less is more

There's something about a well-crafted bonsai tree that conjures notions of dwarves, hobbits, and enchanted forests. A product of the ancient Far East, this almost 2,000-year-old hobby grafts the most striking elements of art and gardening, mirroring both the sublime beauty and the rugged hardship of nature.

But mimicking nature is no easy task, and while the trees are trained to look small, the body of knowledge about bonsai gardening is immeasurably vast.

At the Muranaka Nursery in Nipomo, George Muranaka and his father Kanemi have harnessed two generations of experience to create one the best bonsai nurseries in California. But in an apprenticeship where you spend the first three years learning to water and pull weeds, George maintains that heâ€™s still just a beginner.

Kanemi, now in his 70s, moved to the U.S. in 1956. In Japan he had been an artist, but in California he had to find a more practical way to make a living, and like so many immigrants to the Central Coast, he began working in the strawberry fields.

Kanemi quickly demonstrated a knack for horticulture, but he never lost his skill as an artist. And for several years, he studied bonsai gardening under the great Japanese-American master, John Naka, who passed away a year ago this week.

#In 1978 Kanemi opened the nursery. Slowly, like a steadfast bristlecone pine, it grew; and gradually, it flourished. Today the Muranakas attract bonsai enthusiasts from across California and the country. Most of their business comes from L.A., the Bay Area, and the Central Valley, but they also serve customers from Texas, Boston, and New York. And itâ€™s all by word of mouth; their only advertising is a small listing in the local yellow pages.

With about two acres of potted and ground-grown trees, the Muranaka Nursery has an incredible selection of hard to find material. While most people think of small trees in small pots â€” bonsai literally means â€œpotted treeâ€? â€” the most robust specimens start out in the ground where they can develop stronger roots and a thicker girth.

Two-thirds of the nurseryâ€™s trees are in the ground â€” mostly black pines, but also junipers, cypress, and maples. Customers peruse the aisles studying the shapes of the young trees, and in late winter they can dig them up and take them home to be potted.

Thatâ€™s when the real fun begins. By the time the six- to eight-year-old tree is uprooted, itâ€™s usually developed some shape that will lend itself to a particular style of bonsai, like windswept, cascading, formal, and informal upright. But it will take years of pruning and wire training to achieve the stateliness of a genuine bonsai.

Some of Muranakaâ€™s best trees are actually collected from the wild. Common trees like the California juniper can be found in uncommon shapes, and a skillful gardener can train the tree to show its more distinct characteristics. Kanemi has one such juniper, which is about 350 years old, in his private collection.

Itâ€™s hard for a bonsai grower to part with a tree of such age and stature. (Itâ€™s even harder to find someone to properly care for the tree when you want to go on vacation!)

The age of a bonsai can be one of its most impressive qualities, but as George explained, â€œItâ€™s not the age of the tree thatâ€™s important; itâ€™s the appearance of age.â€?

There are a number of tricks used to give bonsais thicker bark and other features that suggest old age. But the general rule of respect is to treat the tree like a woman: never ask its age. 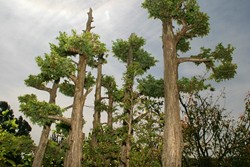 #Though the art of bonsai has been around for millennia, itâ€™s still something exotic and mysterious to Westerners, surrounded by misconceptions. One of the biggest myths, according to George, is that bonsais are meant to be grown indoors. With a few minor exceptions, including certain varieties of ficus, thatâ€™s just not true. All of Muranakaâ€™s trees grow outdoors, mostly in full sun.

In the beginning, George didnâ€™t take much interest in his fatherâ€™s business. He had a steady job working retail at a local hardware store. Before or after work he would walk around the property, watering the multitudes of trees.

But then Kanemi wanted to retire, so George stepped in to lend a hand, and for the last 10 or 12 years heâ€™s basically been running the place.

As for keeping the business in the family, George is skeptical about his own son ever getting involved. Heâ€™s studying graphic design and computer animation at ITT Tech, and George said frankly heâ€™s more interested in video games than gardening.

Those who are interested in learning more about bonsai should contact the Bonsai Club of Santa Maria. The group meets once a month for a three-hour workshop in Nipomo, and membership is just $25 for 6 months.

For more information about the club, the nursery, or bonsai in general, call the Muranaka Nursery at 929-4818.

Staff Writer Jeff Hornaday can be reached at jhornaday@newtimesslo.com.

Schnackenbergâ€™s compost tea, brewed fresh by the vat at Agri-Turf Supplies in Santa Barbara, is not unlike a mug of English Breakfast tea for your plants. This cuppa is a dense, rich blend of microbes best served at room temperature about once a week or so.

#As its name implies, this â€œteaâ€? is a blend of brewed compost. Schnackenbergâ€™s blends are steeped in aerated water for 24 hours with microbial nutrients and fed to gardens and landscapes up and down the Central Coast.

As a relatively new system for the area, compost tea is still trickling into mainstream gardening practices and the home-do-it consciousness. Schnackenberg, co-owner of Agri-Turf Supplies, said heâ€™s fielded many questions and combated a few assumptions regarding his brew.

He said a lady from England spied the Earth Tea brewer in his shop and asked if she might join him for a spot of tea.

â€œShe had a real laugh with that,â€? Schnackenberg said.

He shared that while some gardeners and growers are eager to give compost tea a try, others are more skeptical.

â€œMost people â€¦ have heard good things about it,â€? he said. â€œIâ€™ve talked to other people who say it sounds like hocus pocus. When Iâ€™m able to explain the program, then it seems to make sense.â€?

At its core, the program is about making the soil as healthy as it can be. Schnackenberg emphasized that compost tea is a part of a sustainable gardening system and shouldnâ€™t be tried slapdash.

Give your plants a cuppa For more information about the compost-tea program, contact George Schnackenberg at Agri-Turf Supplies at 569-2257. Schnackenberg also recommended some web sites:

â€œCompost tea by itself as a single component will have some benefit,â€? Schnackenberg said. â€œHowever, itâ€™s not what weâ€™re trying to preach.â€?

When gardeners or growers decide to give compost tea a try, Schnackenberg said heâ€™ll first ask them about the soilâ€™s history â€” what was grown there before, what kind of fertilizers and pesticides were applied, what irrigation methods were used.

With a sense of what heâ€™ll be working with, Schnackenberg then tests the soil by sampling the nutrients present. Depending on the results, heâ€™ll then apply different minerals and nutrients to the ground.

Next, the compost tea is served, first with a drench application directly to the soil about four to six times a year, Schnackenberg said. Then the gardener can apply the tea directly to the plantsâ€™ leaves (a foliar application) every week, every two weeks, or once a month, he explained.

â€œWhat the compost tea does, is when you bring the building materials â€” the minerals and soil nutrients â€” they canâ€™t be put together until the workers show up,â€? Schnackenberg said. â€œItâ€™s like a house. You can have the wood and plumbing dropped off, but if the workers havenâ€™t shown up, you canâ€™t move in.

â€œThe compost tea has beneficial fungi and bacteria â€” it brings a lot of workers to the party.â€? 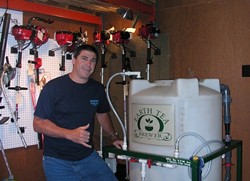 #The hordes of microscopic workers break down the nutrients and minerals in the soil and deliver them in the right amounts to the plants.

â€œEach of us could sustain life for a while being fed intravenously, but without exercise weâ€™d dry up and blow away,â€? Schnackenberg said. â€œWe have plant addicts â€” theyâ€™re waiting for their fix of nitrogen, potassium, or phosphorus, or whatever.

â€œIf we start really thinking about the life of the soil and get to know the neighbors that we walk upon every day,â€? Schnackenberg continued, â€œthen we start changing how we have to [deal with] problems with our plants. A healthy soil is going to produce a healthy plant. That plant is going to be resistant to bugs, fungus, nematodes.â€?

Schnackenberg cautioned that as with an exercise program for people, it takes time to get results from a compost-tea regimen.

â€œWhat I try to tell people is you need to give it a couple years [to undo] whatâ€™s happened to the soils for the last hundred years with chemical fertilizers,â€? he said. â€œIt takes a little while to get the soils in balance.â€?

He also noted that when a green thumb becomes a connoisseur of compost tea, there will likely be an increase in cost up front.

â€œBut two years from now, the costs will be down significantly,â€? Schnackenberg said. â€œAs opposed to just putting out lawn fertilizer and killing the weeds â€¦ the microbes in the soil are doing the work for you.â€?

As he continues perfecting his compost brew, Schnackenberg said heâ€™s taking it slow, balancing customer service with getting the word out. He mentioned that there are several growers in North Santa Barbara County who are making their own compost tea and getting results â€” but they didnâ€™t want to divulge their practices to the public.

â€œIf farmers have a program thatâ€™s working, they donâ€™t want the next guy to know what theyâ€™re doing,â€? Schnackenberg said. â€œPeople are seeing that itâ€™s working, and theyâ€™re trying to hold on to their knowledge.â€?

That knowledge hasnâ€™t quite made it to local garden shops. The store manager for Orchard Supply Hardware (OSH) in Santa Maria said heâ€™d never heard of compost tea and hasnâ€™t run into any customers asking for it.

OSH has supplies for standard composting, said Greg Madrigal, and could conceivably offer compost-tea components in the future.

â€œIt sounds interesting â€” youâ€™d have to have the right stuff to do it,â€? the manager said. â€œThe soil tea is a whole new concept. We try to be on the cutting edge of new technology, but it hasnâ€™t trickled through yet.â€?

Jim Oâ€™Neill, nursery manager for Pacific Coast Home and Garden in San Luis Obispo, said heâ€™s heard of compost tea but hasnâ€™t met with much demand for the elixir.

â€œIf there are articles about it, then people come in,â€? Oâ€™Neill said. â€œWhat they see in Sunset, they always come in asking for it.â€?

For savvy SLO or Santa Maria home gardeners seeking a compost teatime of their own, Schnackenberg offered several web sites (see infobox) and invited locals to give him a call.

Andrea Rooks is the news editor for New Timesâ€™ sister paper, the Santa Maria Sun. She can be reached at arooks@santamariasun.com.