Where the wild things are

Carrizo Plain rancher John Ruskovich stood in the open ground behind his property after dusk, watching the western ridgeline.

Starlight coated the sky. A raptor drifted slowly across the remote town of California Valley and toward the distant Caliente foothills. Other than the faint whistle of an eastbound zephyr, not a sound hit the wind.

# In the tranquil night, it was easy to imagine scenes of the valley's distant history, when Chumash stalked tule elk in the high grass.

The cry of a colt cut through the silence.

"This is why we're here," Ruskovich suddenly said, keeping his gaze locked on the horizon.

The scene probably differed fairly little from the times when Ruskovich's pioneer descendants first dropped a spade in Carrizo an ancient grassland between the Central Valley basin and the forested coastal ranges. A century ago, much like today, ranchers carved out a living in the dry soil, far from the nearest trade hub. The isolation has attracted outlaws throughout Carrizo's history, as the Wild West renegade unromantically transformed into the modern-day meth head.

These days, however, the old Carrizans also share the landscape with folks cut from different fabric.

As the coastal gap filled in the late 20th century, rising land prices in Pacific communities pushed many low-income residents over the eastern ranges. Some sought refuge in California Valley and the greater Carrizo basin.

Not long after, a late-term proclamation by President Bill Clinton in 2001 established the Carrizo Plain National Monument in the southern half of the valley. The monument opened the levies to a tide of ecotourism and ultimately charmed Realtor interests. In came a host of what locals refer to as "born-again Carrizans" propertied non-natives seeking respite from the modern world.

Suffice it to say, the three faces of Carrizo never managed to see eye-to-eye, and, with the relatively meager law enforcement presence, disagreements on the plain occasionally spun out of control.

"It's lawless sometimes like people standing on their roofs with shotguns," resident Pati Nolen said.

A turbulent tradition
Since the cultural confluence, big problems have emerged in the little community. 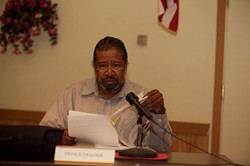 # In spring 2005, the manager of the Carrizo Plain National Monument, conservationist Marlene Braun, pulled out a revolver and took her life in the wilderness. Friends believed that rancher interests corrupted her boss, Ron Huntsinger of the Bakersfield BLM office, and prompted the bully tactics that drove her to depression. An inspector general investigation, conducted this past spring, remains unreleased.

In 2004 less than half a decade after a scathing grand jury report declared that "a history of inefficient and inappropriate action" surrounded the CSD a court sentenced the agency's former general manager, Brad Bjork, to four years and eight months for embezzling more than $316,000 in clumsily forged checks.

Beyond the stigma implanted in the community by that incident, the more tangible loss of revenue continues to haunt the district's bankroll to this day.

"When you start from zero, there's nowhere to go but up," east county Sheriff's Deputy Randy Johnson optimistically opined at a recent community meeting.

Instead, due to funding shortfalls and community head-butting, the CSD continues to tread water. A mix of frequent accusations, the always-pending threat of recall, and irreconcilable acrimony between the factions tends to breed incessant distractions.

"I don't understand the point of all this animosity," Johnson said.

In the latest accusatory foray, opponents decried one board member for allegedly cavorting with a suspected meth dealer, rumored to be under investigation for sparking the 1,200-acre Beck Fire while dumping laboratory byproduct.

Fire investigators indicated that metal grinding on a nearby property actually ignited the blaze. Officials with the Sheriff's Department declined to verify the existence of an ongoing investigation into methamphetamine production at the reported residence. 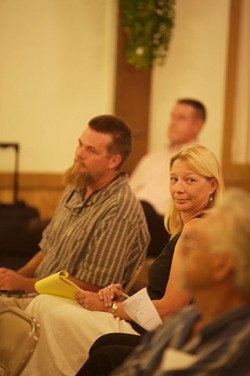 # Earlier this year, CSD president Tammy Forrest the site manager for the Carrizo arm of the Food Bank Coalition was investigated by the nonprofit after residents called the Paso Robles office claiming that she distributed food along political lines. Food Bank executive director Carl Hansen called those charges bunk.

Either way, coming rains will wash down more mud to sling.

"It's a negative atmosphere," Forrest said. "People drive slowly past your house and you wonder, 'What are they checking out?'"

The Born Agains' enduring complaints include the swelling of meth operations, squatting transients, and rampant code violations three elements that hamper the growth of property values in the valley. These homeowners, blaming the valley's trailer park population, called in the regulatory watchdogs from San Luis Obispo. The county's presence in Carrizan affairs irked the other two parties and fueled more contempt all of which began pouring out at meetings of the only semblance of government in the valley: the Community Services District.

Webb's point: The numbers appeared to defy logic though, he later admitted, he misread them. The board members, on the defensive, retorted by requesting the documents for an opportunity to review the figures. Webb claimed that he had already provided them.

"Don't you realize that when you don't give us answers it fuels speculation?" he fumed.

"You never showed me anything," director Tom Ortega harshly responded. 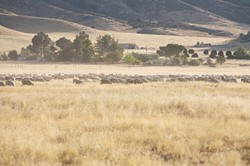 # "We gave it to Director Frazier."

"I don't care what you showed to Director whatever-his-name-is, you never showed me anything."

As Prince Frazier shot an incredulous look back at Ortega, the small crowd in attendance boisterously split down two lines. Indictments flew about as loosely as the insults an improvement from the previous installment when some citizens alleged that threats of physical violence took place.

With so much bitterness among the California Valley trichotomy, it's no small wonder that four of the five directors will face a recall this November. Ruth LeGaspi looks to unseat Frazier perhaps the lone board member friendly to the Born Again Carrizans who replaced her after a recall last fall. Frazier's camp, in turn, aims to remove Ortega, fellow director Fred Rahner, and president Forrest, alleging that the trio mismanaged CSD affairs.

The specific charges include Brown Act violations, disregarding grand jury recommendations, withholding public documents, and the improper use of funds.

"Most of our board seems to believe they are above the law, and that is a very bad frame of mind for an elected person to have," local Nolen said.

The accusations started when the board implemented a controversial waste disposal service at $15 a month.

"They all got up and walked out saying, 'You've cooked your own goose,'" Director Rahner said. "Since then, they've been hateful. They've been disrupting every meeting."

"We love the valley and we're doing our best," he added.

On Aug. 28, CSD counsel Michael Seitz responded to a Freedom of Information Act (FOIA) request by burdening it with financial

# constraints. A mammoth demand for records filed earlier that month by district president candidate Bob Nolen came back his way, sporting a $500 price tag. Sacramento public records attorney James Ewert of the California Newspaper Publishers' Association stated, in near disbelief, that he's never heard of such a maneuver.

Ewert cited possible violations to the Public Records Act and also Article 1 of California Constitution in the action of CSD counsel.

"The district can recover the cost of duplicating the documents, but it has to be actual cost," he said.

Using the conservative standards of 25 cents per paper copy and $6 per audiotape, the recoverable total comes out to about $36 assuming that none of the files exists in digital format. The cost for simply compiling the documents for review: zilch, at least legally speaking.

Counselor Seitz replied that unused portions of the $500 deposit would have been refunded.

"[The initial figure] was an estimate covering the district's cost, using an outside copying source," the attorney explained.

Yet, while the Nolens continued to volley accusations against the board, some longtime locals expressed resentment toward the incessant rabble-rousers.

"A lot of those people use hate to get up in the morning," rancher Ruskovich guffawed.

He had only showed up at the meeting to check the status of land he recently donated to the district for a community park.

Ready for regulation?
"We can't drive on every road out there," county code enforcement supervisor Harley Voss lamented. "Squatting is pretty much an accepted practice. A lot of residents don't want to tell on their neighbors, when they did the same thing when they moved to the valley."

# The dilemma over what to do about squatting- from low-income families dwelling in unpermitted trailer homes, to bums in tents, to tweekers in bungalows of industrial salvage often impacts far-off communities. For California Valley, far and away the most distant outpost in San Luis Obispo County, the alienation makes both code and law enforcement a distinct challenge. As a result, Carrizo has become somewhat of a mess prompting some to ponder the realism of bringing the community up to coastal regulatory standards.

"It's difficult," District 5 supervisor Jim Patterson said. "Certainly they shouldn't be above the law just because they're so far from it."

Housing code violations from run-of-the-mill lack of permitting to more egregious public-health concerns surround a bulk of residences in the tiny community. County code enforcement officials admitted that many violations remain undetected. Even CSD president Forrest resided in a mobile home below county code standards as of the property's last recorded inspection on June 19.

However, the problem frequently extends beyond individual lots, and several homeowners aren't interested in hearing excuses.

Across the basin, abandoned cars occupy yards, infest fields, and even obstruct thoroughfares. Most notably, the hideous Gaviota salvage pile off Soda Lake Road near the public mouth of the monument continues to sprout upward and outward. Locals adopted the lot as their regional dump after the county employed it as the staging point in a valleywide cleanup effort years back.

In an attempt to at least remedy the abandoned-vehicle situation, the county initiated a program in which residents could extricate unwanted cars for $25 apiece. Gaps in registration sometimes measured in decades make cleanup efforts easier and more expensive by both relieving the county of its requirement to notify the owners and its ability to fine them.

"Ninety percent of the cars haven't been registered in years," county official Art Trinidade said. "After a while, the DMV drops them from the rolls."

Though the CSD plainly and simply lacks the funding to mop up the impromptu Gaviota salvage yard, Sheriff's Deputy Johnson prodded residents to report individuals dumping at the site. As of last week, local businessman Richie Burgett reported a tentative compromise among the town factions to start chipping away at the massive pile.