Where the wilderness is

This weekend, I discovered a place with no walls or ceilings, where the only source of light was a warm and wacky ball of fire that seemed to float inside some kind of blue, sky-ish substance that was all stretched across the top of things. The air moved, which was weird, and it had an earthy smell, but not like farts or anything. It was a nice smell, with plant flavors tickling my nose holes. Also, there were plants. Lots of plants, just everywhere, and none of them were stuck in pots or vases. They were free, and for a few glorious hours, so was I. 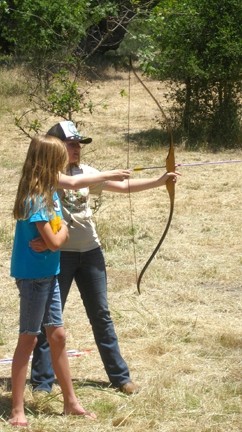 The place was called “outdoors,” and my family and I discovered it May 12 at the Outdoor Discovery Festival, held at Lopez Lake near Arroyo Grande.

I was sort of bummed at first, because the outdoors, for all its supposed greatness, didn’t get good Internets. Would I be able to entertain myself without the complete Supernatural series at my beck and call?

There was a grip of booths atop a hill, so I went there to find out how people could possibly have a hint of fun on a gorgeous lake surrounded by oak groves. They had a few ideas. Park rangers were leading hikes, boat tours, and mountain bike excursions every hour, but I had too many dogs with me (one) and too few hours (two) before I had to work my civilian job. Instead, the family and I opted to play the rangers’ scavenger hunt. They had a list of vendor booths and activities, and if we could get stamps for 16, we’d get a water bottle!*

We talked to Teresa Lees of the California Regional Environmental Education Community about the many ways the County Office of Education is bringing environmental education into the classroom.

“They need to see that they’re a part of the environment and that they have a role in sustaining its future,” she said.

My wife is studying environmental engineering, so she and Teresa hit it right off. I recognized Shodee Chapman, who works at an afterschool program my daughter used to attend. She’s trying to get a summer gig with Camp Natoma, so she pointed me toward their archery booth.

“I just sent five kids over there, and now I’m getting us in the newspaper,” Shodee said. “I’m racking up brownie points today.”

Between us and the archery were a dog trainer whose pup leapt over small children in a single bound, a professional hula hoop instructor, and a couple of naturalists who showed my daughter how to make a cast of animal tracks and me how to rub sticks together really quickly.

“I … have made fire!” I would have said—if I weren’t clumsy and inept.

Outside Now counselor Sam McRee, on the other hand, could survive in the woods with little more than a sharp stick and his signature moxie.

“The goal is to have kids feeling good, grounded, and comfortable in nature,” he said. “They get this confidence, and they know they’re gonna be all right out there.”

The archery line was long (surprise!), so we headed for the shore, where kayakers and paddle boarders splashed in the water. Cuesta Ridge was onstage rocking while their audience sat serenely on a grassy hill overlooking the lake.

It’s actually kind of amazing how easy it is to forget that areas like Lopez exist in our backyard. Now I just need to make a habit of taking advantage.

* In the end, knowledge was the real prize.

Staff Writer Nick Powell watches entirely too much Netflix. Send scenic photographs to npowell@newtimesslo.com to remind him about outside.