Meadow Park neighbors complain about transients, but homeless locals say they don't have many options in SLO

Tents are pitched, people are working on bicycles, music blares from a cheap boom box and everyone appears to be smoking roll-your-own cigarettes. But this isn't some sort of kinetic energy festival, it's just another Thursday afternoon at San Luis Obispo's Meadow Park. 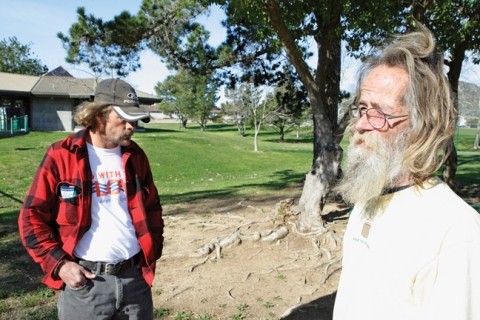 # Intrigued by the commotion, a young father and his toddler-aged son decide to call an end to their basketball fun and investigate the gathering. They head toward the park's convention center and, on the way, pass a young child resting on a well-worn sleeping bag tucked amid an assortment of backpacks and a garbage bag filled with recyclables. The father stops dribbling his basketball and grabs his son's hand tightly, realizing they've just stumbled upon a makeshift homeless commune.

According to local law enforcement officials, homelessness in SLO has been a major issue ever since the city was founded. But nowadays, according to the residentially challenged, local police are increasingly pressuring them out of the downtown section of town. In response, people without a permanent address started congregating in less visible parts of the city, including Meadow Park.

"We're chased out of so many areas, where are we supposed to go?" asked "Shaggy," a 25-year-old homeless man from Morro Bay, who, along with his wife and their 3-year-old son, sometimes stay in Meadow Park. "I figure society robbed the Indians and took their land, so we're just helping getting it back. We feel everyone has the right to stay at the park."

In all, at least 11 homeless folk appeared to have set up camp at the park on that recent Thursday.

While the homeless people of the park seem to thoroughly enjoy the city-funded public recreational area and its amenities, local homeowners have grown vocally upset about the growing transient outdoor assembly.

"This problem, it's gotten worse and worse," said Jon Ellis, a SLO local who's been living across the street from Meadow Park for the last 20 years. "I understand they have a right to be in the park just like anyone else, but they take advantage of it. I'm worried about the kids at the playground."

Ellis said that he's always seen homeless people hanging out at Meadow Park, but he noticed a huge increase about three years ago.

"First it started out with all-day party hangouts," he said. "But now, they put out cardboard boxes, sleeping bags, and tents. They are living in the bathrooms and they give people shit for walking through--like it's their own private community!"

Ellis said that he's called the SLO Police Department many times concerning what he sees as the park's homeless problem, but he hasn't been satisfied with the response.

"We understand the city's really financially strapped right now, but when we play football at the park and it's too rainy, [the police] kick us off the grass," Ellis said. "It seems strange where their priorities are."

"It's not unique to Meadow Park," he said of the groups congregating there. "I've known about it for a number of years. But they have as much of a right to be [there] as anyone else does. So, as far as trying to purge the park of homeless people, that's something we're not even trying to do."

But Blanke made it clear that there's a practical issue involved as well. He noted that a large portion of the park isn't clearly visible from any roadway.

"If an officer is going to find somebody at Meadow Park," Blanke said, "they have to have the time to park their car and get out and walk."

He added that the department's officers don't plan on forcing the homeless out anytime soon.

The county, however, does have a plan to deal with similar problems. According to Morgan Torell, county planner of housing and economic development, the county recently approved a 10-year plan to end chronic homelessness, funded by community service block grants through the state of California. SLO County officials are expected to meet with the consultant firm HomeBase within the next six to nine months to establish a plan.

"We want to get to the root of homelessness rather than boost existing current services," she said.

According to Shaggy, current homeless services, such as the Prado Day Center and the Maxine Lewis Memorial Center, are in dire need of help.

"When I first started working here nine years ago, we would service 80 people a day," said Prado Day Center manager Dee Torres. "Now, we're averaging over 110 a day. Times are getting tough."

Torres said that it's very difficult to help the additional homeless people because there just aren't enough funds.

"I don't want to see the clients in Meadow Park," Torres said. "I want them to access services and help them get back on their feet. But it's challenging to do so with limited resources."

"They need an easier solution," he explained. "Give us a designated area and facilities next to a liquor store, and we'd be cool."

Reporter Kai Beech hopes to avoid homelessness himself. Contact him at kbeech@newtimesslo.com.