Where will you be on Bill Murray's birthday? 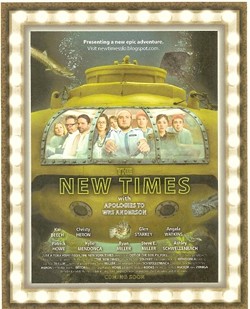 Every year, on Sept. 21, we gather on the beach wearing red beanies. At sunset, we make a toast to the comedic genius of our demigod, bid him happy birthday, take a shot, and dash bravely into the Pacific Ocean.

It’s one of my favorite traditions, in part because it’s infinitely cooler than sitting at home gushing about how Bill Murray was spotted driving a taxi in Oakland. And did you hear about the time he ate a french fry off a woman’s plate, telling her “no one’s going to believe you”? What about the time he crashed that couple’s engagement photos? I’m not even certain at this point whether he’s more famous for his acting career or his zany adventures in party crashing. And, despite the fact that Life Aquatic with Steve Zissou is hands down my favorite movie, I’m OK with that. There are at least a million reasons to like Bill Murray—in fact I listed a few dozen of my favorites in an article titled “Stalking Bill Murray” that I wrote for Wes Anderzine, and you can read this lengthier explanation of my love for Bill Murray at janeeyrelikescupcakes.wordpress.com/2014/03/21/stalking-bill-murray/. And this year there’s an added reason to celebrate. True blue Bill Murray fans Maeva Considine and Aileen Manley are getting married the day before Bill’s birthday, and they’ve elected to merge their wedding reception with the annual Bill Murray tribute, meaning that we’re going to party harder than we have in previous years. In fact, in addition to sorting out the million and one small details that go along with organizing a wedding, Considine invested some creative energy developing Bill Murray-themed games for party attendees to participate in.

My honest prediction? The games are going to be completely ridiculous and you’ll go home with at least three whacky anecdotes from the game segment of the evening alone.

My other honest prediction? It’s probably going to get cold—especially for the brave souls who participate in the sunset ocean dash, which is entirely optional. Typically, these brave souls retreat to the fire blazing from the communal bonfire pit that we staked out earlier in the day. But due to the drought, California State Parks elected to remove the bonfire pits three months early rather than risk a potential wildfire, so it’s going to be a little bit more difficult to warm up after taking the plunge. But faint heart never won fair Bill so we’re going ahead as planned, and I’m playing mom by reminding everyone to pack extra towels and jackets.

Now for the big question: Should you spend your Sunday afternoon and evening cavorting on a beach, swapping your favorite Bill Murray movie lines with freaks in red beanies and proton packs? If your answer to this question is anything but a hearty “absolutely,” then you’re loonier than Bob Wiley.