According to press materials, “Guitarist Dweezil Zappa has cocooned himself away in the studio this past year engineering his own metamorphosis. ‘In order for me to play my father’s music correctly I needed to understand the fundamentals of his music more thoroughly, which meant a lot of studying,’” he said.

Frankly, only Frank Zappa is Frank Zappa, but if anyone can pull off of his genius, it’s his son. For fun, here are a few Frank Zappa quotes: “Let’s not be too rough on our own ignorance. It’s what makes America great”; “Jazz is not dead, it just smells funny”; “Tobacco is my favorite vegetable”; “It’s always advisable to be a loser if you cannot become a winner”; and my favorite, “May your shit come to life and kiss you on the face.”

On Saturday, Feb. 11, SLO Brew presents Gardens & Villa (7 p.m.; all ages; $10). The Santa Barbara act “formed following the collapse of a noisier post-punk band and a hitch-hiking journey up the West Coast,” says their bio. “The music they make is very much connected to the coastal city they call home—the stony bike rides, dance parties, a scene free of judgment. The band refers to this Santa Barbara feeling as ‘coco vibes.’”

We’re just past Bob Marley’s birthday (Feb. 6), but the real Marley celebration happens this Monday, Feb. 13, when Groundation returns to SLO Brew (7:30 p.m.; all ages; $18 presale or $20 at the door), with local act The Kicks opening. Rootsy, reverent, and authentic, Groundation does Bob’s legacy proud.

And there’s more reggae afoot on Tuesday, Feb. 14, when Through the Roots hits the club with Fortunate Youth and MTHDS (7 p.m.; all ages; $10 presale or $12 at the door).

Finally, you may want to buy tickets now for The California Honeydrops next Thursday, Feb. 16 (7:30 p.m.; all ages; $10 presale or $12 at the door). These purveyors of blues, gospel, second line jazz, and early R&B really know how to throw a party!

I’ve got to admit it: Speed, thrash, and death metal are not my favorite genres, so when I need to find out if a metal band is up to snuff, I turn to resident hesher Steve E. Miller, New Times’ intrepid photographer and speed metal freak. 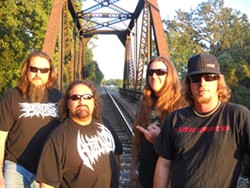 I toss him the Facinorous CD, he pops it in his CD player, slaps on the headphones, and for the next half an hour or so, I see his eyes roll back into his thrashing head. Then the earphones come off, and he throws me the CD and says, “This would be awesome if it was 1995.”

Since Miller wishes it was 1995 (the last time he got laid), that’s high praise indeed. Then he asks, “Where are they playing?”

“Oh, they’ll pack the place,” says Miller. “Facinorous has a cool groove to them, so people who are into metal are going to love them.”

I can tell you the band is fast, tight, and sounds like they’re crawling up a chasm from the bowels of hell. In short, metalheads, prepare to rock!

“Nice girl, but about as sharp as a sack of wet mice.” “Gal reminds me of a highway between Forth Worth and Dallas—no curves.” “The snow, I say the snow’s so deep the farmers have to jack up the cows so they can milk ‘em.”

I don’t know if the Foghorn Stringband has anything to do with Foghorn Leghorn, the Looney Tunes Rooster, but I hope so! There’s nothing better than a little cornpone humor with your deep fried old-timey music.

The world touring quartet has been in the vanguard of reviving American old-time music for a decade, and their newest album, Sud de la  Louisiane, draws from “tunes and songs of the American South, from the hollers of Appalachia to the early days of country music,” according to their bio. “They play the old way, the way you’d have heard stringbands play on Southern radio stations back in the 1930s. They don’t fancy up the music to make it more modern; instead they reach deep into the heart of the songs, pulling out the deep emotions that made them so enduring in the first place.”

The potluck supper stars at 5 p.m., and the show starts at 6. This show is made possible through the generous support of KCBX Public Radio and Live Oak Music Festival (which you should buy tickets for online at liveoakfest.org).

In Celtic Nights: Journey of Hope, which happens this Thursday, Feb. 9 at Performing Arts Center’s Cohan Center at 7:30 p.m., you’ll witness a “show in celebration of song, expertly weaving the lilting melodies and plaintive lyrics of a rich Celtic heritage to tell the story of a people,” from the same folks who created Gaelforce Dance. Tickets range from $16 to $38. Call 756-2787 to buy yours.

There’s a new spot in town to sip some vino and kick back and listen to some free tunes. Called Alegria Wine and Ware (942 Chorro Street), the intimate venue has live music on Thursdays from 7 to 8:30 p.m. See Danny Grasseschi play covers from the ‘60s through the ‘80s on Thursday, Feb. 9; see singer-songwriter Vince Cimo on Thursday, Feb. 16; and see local favorites Bob and Wendy on Thursday, Feb. 23.

Peter, Paul and Mary founding member Peter Yarrow plays the Clark Center this Friday, Feb. 10 at 8 p.m. I don’t know about you, but every time I turn on the TV I see a commercial for this concert and Yarrow singing “Puff, the Magic Dragon,” which whisks me right back to my childhood, which was subsequently destroyed after I heard the song was about taking drugs or smoking pot or something. My sanity and childhood was restored when I learned it was all an urban legend, and according to Wikipedia (What? They might be right.), “Peter Yarrow has frequently explained that ‘Puff’ is about the hardships of growing older and has no relationship to drug-taking. He has also said of the song that it ‘never had any meaning other than the obvious one’ and is about the ‘loss of innocence in children.’ Hmm. It did make me lose my childhood innocence. Any way, call 489-9444 for your $35 to $45 tickets, and remember that you’ll also hear songs like “Leaving on a Jet Plane,” the first song I ever learned to play on the guitar during guitar lessons at the YMCA in Madison, Wisconsin. So. Much. Nostalgia.

Reggae act The Souls of Love hit the Frog and Peach this Friday, Feb. 10, bringing their sweet sounds to town just a few days after Bob Marley’s birthday.

In celebration of Valentine’s Day, Acoustico will be playing a “Night of Love Songs” at Gather Wine Bar this Saturday, Feb. 11 from 7 to 10 p.m. According to the band, “You’ll hear some sweet, slow love songs, oldies, and some torch songs this special night, all with our special stamp on them. Gather Wine Bar has a wonderful intimate ambiance that suits the romantic evening out, paired with some excellent wines and light and delicious foods.”

Freebo (who played bass with Bonnie Raitt and John Mayall and also plays tuba) will play the next Música Del Río House Concerts show in Atascadero on Saturday, Feb. 11 at 7:30 p.m. Organizer Fred Monroe remembers booking Freebo into his second-ever house concert: “He didn’t play the tuba or the bass that night. And the songs and guitar licks we heard that evening really became the benchmark for our series for years to come. Freebo is a genuine folk, rock, and blues icon who, after over 30 years of recording and touring with many of the great artists of our time, is regarded as one of the most gifted singer-songwriters of today.” Call 466-6941 for $15 tickets and show details.

There’s gonna be some stompin’ and a-hollerin’ at The Z this Saturday, Feb. 11 when American Dirt, Mother Corn Shuckers, and The Dead Volts ride into the club for an evening of goll dern ‘Merican music! Yee haw! The new kids on the block are American Dirt, whose lead guitarist Jon Bartel filled me in on the band: “Through all the lineup changes, we’ve stuck with the name American Dirt because we think it evokes the type of earthy, American music we’ve all been influenced by, ranging from Hank and Cash to Young, Petty, Nirvana, Wilco, Whiskeytown, etc., and it’s this tradition of raw songwriting and raw sound that influences us. Our sound can be described most accurately, perhaps, as ‘Garage Country.’ Big guitars, three-part harmonies, plenty of boot stomping, and even a little bit of fiddle.” The show starts at 9 p.m. 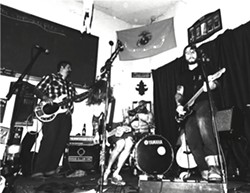 Matthew O’Neill is a product of Facebook, Garageband, and cheap recording tools, which he’s parlayed into a career delivering “rural-primitive … country-rock,” according to the Neptune Research blog. Find out what all the fuss is about this Friday, Feb. 11 when he plays Kreuzberg.

If you were hoping to go to the SLO Botanical Gardens’ Laurence Juber concert this Sunday, Feb. 12, bad news! It’s sold out. Organizers say there may be a few tickets ($25) available at the door due to last minute cancellations, but they make no guarantees.

What’s that smell? It’s love in the air, and you can suck in big lung-fulls of it this Sunday, Feb. 12 from 1 to 4 p.m. when Three Martini Lunch plays about the Papagallo II yacht during a special Valentines Luncheon Cruise. Find out the details of this love boat at onboardnauticalevents.com or by calling 771-9916. M’wah!

Old Blue Eyes is long gone, but his music lives on, and this Sunday, Feb. 12, a couple of our finest local Frank Sinatra-style performers, Steve McAndrew and Chad Stevens, will play Congregation Beth David with back-up band the Brett Mitchell Trio to deliver “A Salute to Frank Sinatra.” You’ll hear his classics as well as learn a few facts and hear a few anecdotes about this quintessential American music man. The show runs from 3 to 5 p.m. Tickets are $18 presale (544-0760) or $20 at the door.

Guitar master Alex de Grassi returns to the area with a concert this Sunday, Feb. 12 at 3 p.m. in the Performing Arts Center Pavilion. The artist himself will present a free pre-concert lecture at 2 p.m. in the Pavilion. He’s gone from coffee house and busker to the forefront of the acoustic guitar world, delivering orchestral compositions that seem impossibly rich to come from one man on a guitar. Tickets are $22 to $28. Call 756-2787.

Pianist and violinist Anita Chen will play the next North SLO County concert series on Sunday, Feb. 12 in Paso’s Trinity Lutheran Church (3 p.m.; all ages; call 239-2770). Accepted into the pre-college division at Juilliard School at age 7, Ms. Chen has won numerous piano and violin competitions, including the 2007 Carlson-Horn Competition. She’s a tour de force of the chamber music scene. 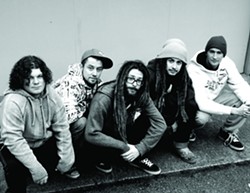 L.A.-based quartet Paul Inman’s Delivery is returning to the area after a long stretch of ignoring us up here in the weeds. Inman will bring his gothic Americana folk rock to Last Stage West (which really is out in the weeds) on Sunday, Feb. 12 at 4:40 p.m. (the show will also be streamed live on laststagewest.net). Comprised of singer-songwriter-guitarist-pianist Paul Inman, drummer Robert Dill, bassist Rick Smith, and keyboardist John Bird, they list folks like The Band, Tom Waits, The Heartbreakers, Buffalo Springfield, Neil Young and Crazy Horse, Blood on The Tracks/Desire-era Dylan, and Van Morrison’s Hard Nose the Highway as influences.

High-energy reggae from Ashland, Oregon, is headed our way when Synrgy plays Frog and Peach on Sunday, Feb. 12. For the past couple years, the band’s been touring up and down the West Coast, building up a solid fan base thanks to their mix of roots, ska, rock, funk, and hip-hop.