Where's the beef? The butcher's art is alive and well at Arroyo Grande Meat Co.

When I meet up with Arroyo Grande Meat Co. Owner Henry Gonzales, he puts out his elbow, not his hand. This is the secret handshake of the busy butcher.

The holiday season is already in full tilt, and Gonzales has spent all morning “pumping hams.” He wipes his hands on a rag and explains that, “pumping”—injecting the meat with a solution of flavorful juices—comes between the brining and smoking process (there’s a 120-year-old smokehouse out back doing its magic as we speak). 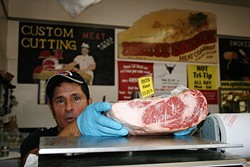 “We smoke the hams really well, and when the timing is right, we cook them to exactly the right temperature—145 degrees,” Gonzales says. “When you get ’em home, all you have to do is warm the ham up and it’s perfect. I’ve been doing this for my customers for years. I tried getting other hams, but we couldn’t give them away.”

But it’s not just these perfect, juicy Christmas hams that are dancing through Gonzales’ mind these days. There’s also top notch turkey. Lots and lots of Thanksgiving turkeys—oh, and mountains of prime rib, cut to order, too.

On this day, Gonzales and his son, Josh, are barely keeping up with orders, and the phone keeps ringing. There’s plenty to do around here, but the longtime butcher happily sits down to talk turkey. Lucky for my salivating New Times readers, this butcher is always game for meaty discussion. I agree wholeheartedly: If it bleeds, it leads!

“My job is to exceed your expectations,” Gonzales says. “My ear is always listening to my customers and finding out what makes them tick. All they have to do is say the word, and I’m there to take care of ’em.”

Under the watchful eye of a wild boar head mounted on the wall, I get to asking about the butcher’s craft—the art of transforming cow to steak, or pig to chops. 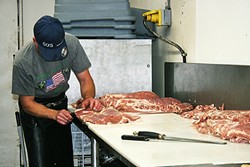 Gonzales tells me that cutting up meat properly is a skill that’s been passed down for generations—one that was once in danger of dying out. In a world where you can go to the grocery store and pick up a pre-packaged piece of meat, Arroyo Grande Meat Company offers a personal, special touch that feels delightfully old fashioned.

“Processing takes great skill, and there are very few people left that can do it the way we do it,” Gonzales says. “Bottom line, you need skill. I personally love McDonald’s, but McDonald’s is not Madonna Inn. We supply meat to those customers that don’t mess around. They want the goods.”

And how does one deliver those goods? First: sourcing meat from only the best places around the country and occasionally, the globe. Two: Inspecting each product like a hawk.

“If it’s not up to snuff, we reject it,” Gonzales says. “People tend to focus on the outside of the meat, with their eyes. I want you to focus with your taste buds. When you take a bite of our pork chop—honey, it is so good that you’re going to give up vegetables. It’s not just the cut. It’s the quality of the cut.”

The way Gonzales does things is strikingly similar to the old days. Some tools and technology (email orders for Thanksgiving turkeys, say) have progressed, but the end game is the same. The butcher shop offers custom processing, including curing, smoking, and sausage production, Gonzales’ pride and joy. His luscious links are authentic and natural, carefully prepared without fillers, nitrates, or chemicals.

Believe it or not, back in 1897, the shop was also similar. You’d come in and see the counter case filled with meaty delights. A massive scale once used to weigh incoming meat remains, awaiting the honor of restoration.

Of course, back then there was something incredibly revolutionary, too: meat lockers. During our interview, I notice a framed piece of paper and a key hanging on the wall. It harks back to the stretch of time—about a century ago—when the place was known as Wilkinson’s market.

“I have customers that come in and tell me stories of when they were a little boy or girl. They used to have lockers, and people would store their meat here,” Gonzales says. “If you look on that card hanging on the wall, it says the customers’ phone number is ‘205.’” 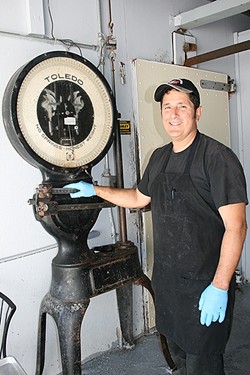 This all seems so very old-timey, but these days, the past is back with a vengeance. Like a barber or milk man, Gonzales knows his customers, and that’s worth paying a premium for. The butcher knows what cut a particular husband likes, and which the wife prefers. He performs magic tricks with his meat daily.

“My customers never have to overbuy or under-buy. If a customer wants prime rib for a special dinner, I’ll get as close to the weight they need, tie it just right, stuff it with garlic, season it, and send them away with cooking instructions,” Gonzales says.

It wasn’t always this way. In his early 20s, Gonzales worked as a manager of a grocery store in the Bay Area. He loved working with the public, but found the job tedious.

“I was going to quit, but they offered me a job anywhere in the store,” Gonzales says. “I knew automatically I wasn’t going to be a checker, I wasn’t going to work night crew, I wasn’t going to the produce department. Every time I’d see those butchers, they all seemed fat and happy with a big smile on their face. I said, ‘I want that job.’”

Admits Gonzales, “I was so wrong!”

As it turns out, becoming a butcher is a long and arduous road—one where you learn on the job, working with your hands. There were plenty of flubs and teachable moments.

The greenhorn worked at his craft for years, learning from each mentor along the way. When his father-in-law saw an ad in the paper for a butcher shop for sale, Gonzales jumped on the opportunity.

“I didn’t even know this place existed; for years I’d drive by and thought it was closed,” the butcher says. “It was a meat shop, but for quite a while the front was closed, but the back was open.”

As it turns out, Gonzales knew a longtime employee of the place, a real, old-school butcher with a sterling skillset. After he purchased the shop in the early ’90s, Gonzales continued to learn from this mentor.

“Going from putting a ham on the shelf to making a ham and slaughtering the animal—there’s a big difference there,” Gonzales says.

Before he slaughtered his first animal, the butcher had never shot a gun. Slowly, deliberately, he learned the way.

“For me, the main focus is the welfare of the animal and the cleanliness of my job. It’s this sigh of relief. I try to make it as simple, humane, and clean as possible.”

Gonzales often drives to customers’ homes, slaughters their animals gracefully, then processes the meat back at his shop. Kind of makes you look at the term “full service” a little differently. The butcher says he’s heartened to see a renewed interest in knowing where food comes from.

“Younger people are saying, ‘We don’t want to lose this craft,’” Gonzales says. “For quite a while the mentality was different, the public saw us as dumb hicks. When you learn how to do things from the ground up, it gives you enormous respect for the land, animal, and the people you’re serving. I have the utmost respect for people in ag. There’s no better, hardworking, or honest people in the world.”

When you pick up a few of Gonzales’ perfectly marbled filet mignons, thick cut ribs, or sweet, velvety hams, Gonzales wants you to taste that respect. It’s this special consideration that turns a family meal into a family tradition.

“We want to help mom, we don’t want to compete with her,” Gonzales says. “Mom’s always the best and there’s so many little things she does and you feel it in your heart. What we want to do is make it easy for people to bring back those memories, to bring back that pleasure.”

Hayley Thomas Cain found the beef. She can be reached at hthomas@newtimesslo.com.