My place in history is secured

I’m surrounded by bikers: hulking, menacing looking fellows draped in black leather festooned with patches that say stuff like “Jane Fonda American Traitor Bitch” and “Laughlin River Run.” Some wear bandanas, some sport earrings, and one guy’s got on a leather vest and an Indian chief’s headdress. There are tons of tattoos, lots of long hair, lots of bald heads, and everyone seems to be wearing sunglasses even though there’s a thick fog obscuring the pier, which disappears into white mist.

It’s Sunday, Sept. 19 at 9 a.m., and I’m walking toward the beach among a herd of hundreds of bikers intent upon re-creating a famed panoramic photograph of a 1929 motorcycle gathering.

The event, part of the Pismo Beach Motorcycle Classic, is being hosted by the Pasadena Motorcycle Club and the San Francisco Motorcycle Club, who wrote on the event website, “An iconic image was created in June, 1929. Hundreds of motorcyclists converged on the sand for the Western Federation of Motorcyclists Rally in beautiful Pismo Beach, California. This image continues to spur the imagination of motorcyclists everywhere, as evidenced by the numerous vendors who continue to package and sell copies of it to this very day. It’s time to recreate history.”

How could I miss this chance to be part of history? Six members of my motorcycle gang, the dangerous Central Coast Classic Motorcycle Club, met at Budget Café (awesome chili verde omelet, people!) to ride down together on our classic European sport bikes, so I called New Times’ intrepid photographer Steve E. Miller, who rode down on his 2010 Yamaha FZ6R, which is so totally lame compared to my awesome 1973 Triumph Tiger 750. Poor Steve. 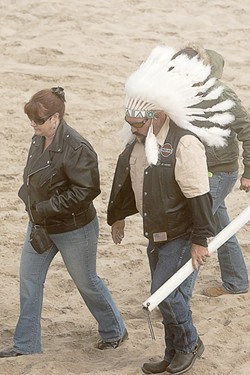 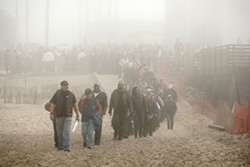 So here we all are, shuffling along, dangerous bikers all, and weirdly, everyone’s behaving him or herself—no shoving, no trash talking, and everyone even manages to walk in single file as we’re arranged on the beach in rows.

My guys and I stand there in the sand holding our banner in the very back row, wondering if we’ll get this sort of turnout for our event next month, the Second Annual SLO Classic Motorcycle Rally, which will be held Oct. 7 through 10 (Visit centralcoastclassicmc.com for an entry form! Sly plug!).

A guy with a camera atop a tall ladder attempts to yell at the crowd, something about taking 12 shots. Then he’s shooting, raising and lowering his arm to let us know when he’s tripping the shutter.

My British pal Phil Honer quips, “I blinked on that one, mate. Let’s have a do over.” 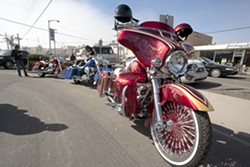 Later, Miller and I are looking over his version of the photo.

“Right there, last row. One guy left of Jason Len of XKs Unlimited, who’s holding the white banner in the middle of the photo. That’s club president John Bernard holding the other end of the banner.”

My head’s the size of a bed bug. I zoom in and start counting … guesstimating my face consists of maybe 150 pixels.