Which recipe will reign supreme at the ninth annual Macaroni and Cheese Festival in Avila Beach?

The Macaroni and Cheese Festival will be held from 2 to 6 p.m. on June 18 at the Avila Beach Golf Resort at 6464 Ana Bay Road. For tickets and more information, visit themacandcheesefest.com. Follow the festival on Instagram @themacfest.

Paso Robles' own "Cheffry Jeffry" and "MacDaddy" will be pulling out all the stops to win this year's Macaroni and Cheese Festival on June 18 at the Avila Beach Golf Resort. 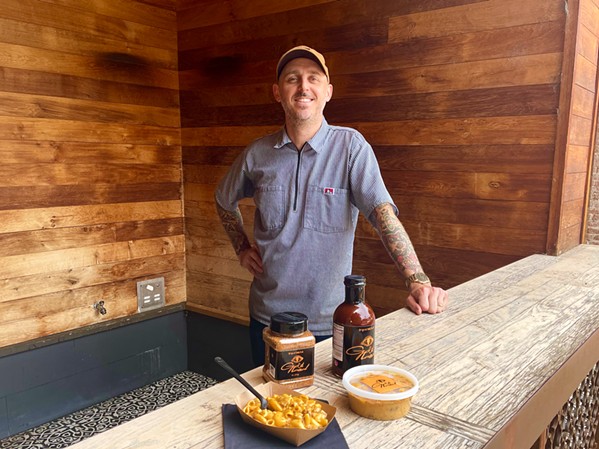 The gooey comfort food, tracing its roots to Italy, made a splash on the American culinary scene in 1937, when Kraft released its Macaroni and Cheese Dinner.

Sold for 19 cents a box, the simple dish combined elbow pasta with processed cheese and fed a family of four, according to Smithsonian magazine. Annual sales quickly surged from an initial 8 million to 50 million boxes during WWII, then settled into a comfortable holding pattern worldwide at a whopping 1 million boxes a day. However, Kraft is for kids. Avila Beach's Macaroni and Cheese Festival is for adults 21 and older. The cuisine is haute, and the chefs—hailing from SLO and Santa Barbara counties—are renowned.

"The Mac and Cheese Fest is one of my favorite food festivals on the Central Coast," said "Cheffry Jeffry," aka Jeffry Wiesinger, owner, pitmaster, and sommelier of Jeffry's Wine Country BBQ.

"Mac and cheese truly is the king of American comfort food," he said. "Although I must say, it wasn't one of my go-to dishes before the Mac and Cheese Fest started. I mean, even 'bad' mac and cheese is still good, but it can be a life-changing experience when you taste really delicious, creative, chef-made mac and cheese."

Wiesinger has amassed an impressive collection of festival trophies, placing in the top three every year since 2013, with two first-place wins.

Giving him a run for his money is "MacDaddy," or Gregg Wangard, co-owner along with his wife, Kelly, of KelleCo Project. The catering firm specializes in seasonal market cuisine with French and Italian techniques.

He attributes his multiple wins to a "secret ingredient"—Gold BellaVitano by Wisconsin-based Sartori.

"I love making mac and cheese with that cheese," he said. "It melts great." 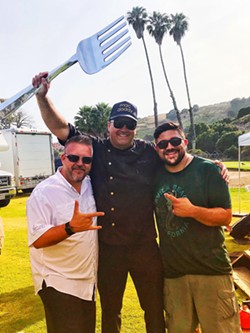 He still hasn't finalized this year's entry, but "it will be market-driven with traditional elbow macaroni, cream, and cheese," he said.

"What separates my mac compared to others," he added, "is that I make each batch to order—no cheese sauce or other shortcuts. It's all tossed right before it's served. That's why it's so addicting.

"It's like eating kids' mac and cheese right out of the pan—right when you make it. That's the ticket."

Both Wiesinger and Wangard were dethroned in 2019 by Mama's Meatball and Mistura owner and chef Nicola Allegretta, who will not be participating in this year's festival.

That means the top spot is up for grabs, and Gold Land BBQ's Luce thinks he's a strong contender.

As a base, "we use elbow macaroni and a creamy sharp cheddar sauce," Luce said. "The pasta is cooked perfectly, and the sauce is silky and smooth."

For the competition, Luce is adding smoked tri-tip seasoned with his homemade barbecue sauce and rub. 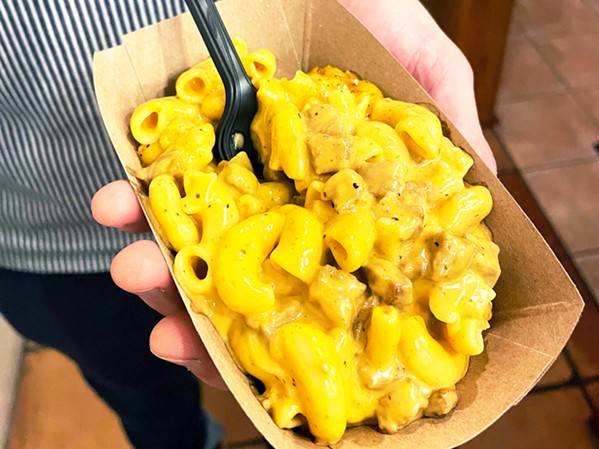 However, his sides—including ranch-style beans, potato salad, vinegar slaw, and mac and cheese—hold up on their own, he said.

"Sometimes when you eat barbecue, the tri-tip could be good, the ribs could be good, but you go over to their sides and they're a little bit lacking," he explained.

That's not the case with Gold Land, and he hopes festivalgoers will agree.

Wiesinger, Wangard, and Luce will be competing against a couple dozen chefs in this year's festival, expected to draw approximately 2,000 guests, or taste testers.

Also tasting the wares, as well as hosting the event, are local radio personalities Adam Montiel and Jeremy West, of Up & Adam in the Morning and the Cork Dorks on The Krush 92.5.

"Everyone's excited to be out, excited to eat, drink, and see each other's smiling faces," said Montiel, who has hosted the festival since its inception. "We want to not only celebrate where we live, but the best of what we do so well here.

"We have world-class wine, beer, spirits, and more, as well as many chefs locally who rise to that level with their cuisine.

"To have these talented chefs having fun, letting their proverbial hair down and enjoy celebrating the top of the comfort food chain, mac and cheese by the beach is an absolute blast for everyone involved," he said.

In addition to sampling and voting for the festival's best mac and cheese, guests will enjoy wine and cocktail tasting, games, live music, and the knowledge that their dollars are benefitting local charities via AGM Community Partners.

The nonprofit, recently launched by Bakersfield-based American General Media—the parent company of The Krush 92.5, Coast 104.5, KVEC, KZOZ, and K-Jug, with offices in San Luis Obispo and Santa Maria—"will use its resources to identify needs and places it can help both the community as well as other nonprofits who are already doing good work locally," Montiel added. Δ