If a secret is muttered out loud and no one hears it, is it still a secret?

Secrets are a complex thing, from what we decide fits the description to who makes us feel safe enough to share our secrets with. There’s undoubtedly a hefty dose of shame that comes with keeping secrets. 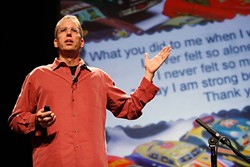 Author Frank Warren found himself fascinated with secrets when he realized his family had been keeping a secret from him. This led Warren to ask strangers from all around the world to send him their secrets, anonymously, to be shared on his blog PostSecret, which launched in 2004. Since then Warren has received more than a million secrets and written six books on the topic.

New Times sat down with Warren, who will speak at the Christopher Cohan Center on April 10, about the power secrets can have over us.


New Times: Where did the idea for PostSecret come from?

NT: You’ve raised more than $1 million for suicide prevention efforts through PostSecret. What made you want to link the project with that cause?

FW: I was a volunteer for a national suicide prevention hotline, and I’ve also lost a friend to suicide. It’s almost like suicide is America’s secret. When people started sending me their secrets, a lot of loneliness and self-harm came up.

NT: What’s different content-wise between the blog and the books?

FW: I try to tell a different story in each book. In My Secret: A PostSecret Book, I felt alone and without direction. It’s the book I wish I’d had in college.

FW: The marriage proposals are pretty exciting. There have been proposals through the blog and at the live events.

FW: The heaviest secrets for me are the ones sent by young people who are burdened. One girl said she pretends to laugh when her friends complain about their moms, but really she would give her right arm to have her mom in her life.

NT: Have you received any secrets from people that you know?

FW: My wife. She wrote, “I wish I could sleep with Richard Gere.” I recognized her handwriting.

NT: I saw boxes around San Luis Obispo marked for PostSecret, where people can send you their secrets. How many secrets have you received from the area and will they be read at your event?

FW: I’m not sure how many there are, but they will be read at the event, along with secrets that didn’t make it to the books that the publisher banned. There will also be a book signing.

NT: What kind of power do you thing secrets have over us?

FW: I think of secrets optimistically. I think they have the power to transform us if we can be vulnerable enough to let them go. There are two kinds of secrets: Secrets we keep from ourselves and secrets we keep from other people. In most cases, the reason we don’t share them is a sense of shame. It’s an illusion that secrets are walls that divide us, they’re really bridges that bring us together.