by Camillia Lanham and Karen Garcia

Editor's Note: Glen and Anna Starkey were out this week, so you have to deal with a review from Editor Camillia Lanham and Staff Writer Karen Garcia instead!

Yann Demange ('71, 2014) directs this film based on the true story of teenager Richard Wershe Jr., who became an undercover informant for the FBI during the height of the crack epidemic in 1980s Detroit. When the feds threaten to throw his father in jail for illegally selling guns, Rick will do whatever he can for his family. (116 min.) 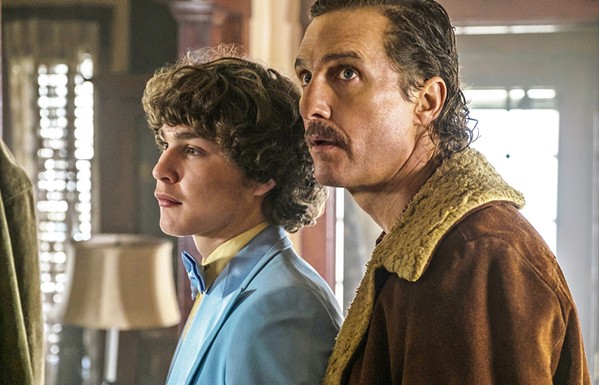 Camillia Hollywood has a flair for dramatizing stories based on real life—leaving out important details, glossing over others, and adding in spurts of half-truths to help with plot points. White Boy Rick is no exception. It's entertaining with engaging actors, a sweet 1980s wardrobe, and down and dirty scenes of Detroit that include a roller rink! But it sort of always feels like something's missing, or as an audience member, I was always missing something. Matthew McConaughey (Dallas Buyers Club, Mud) plays Richard Wershe Sr., a get-rich-quick schemer selling guns to questionable individuals out of the trunk of his rusty brown car in urban Detroit. Wershe Sr. plays the greasy, hard, and mostly not around father to his drug-addicted daughter Dawn (Bel Powley, The Diary of a Teenage Girl) and his drug-dealer/FBI informant son Rick (Richie Merritt). They live in a run-down home in a once middle-class, now crack-addled, neighborhood across the street from Wershe Sr.'s parents, grumpy and sarcastic Grandpa Ray and Grandma Verne (Bruce Dern and Pier Laurie), who are my favorite characters in the whole movie. And while all of that is fairly accurate to the true story of urban legend and supposed drug kingpin "White Boy Rick," the rest of the details are muddled. Two agents and a Detroit narcotics police officer supposedly force Rick into drug dealing and becoming an FBI informant, after they tell him his father's guns can be traced to two murders. They put money in his hand and push him out the door of an unmarked car and onto the front stoop of a crack house. The scene is punctuated by the funny one-liners that punch up much of the dialogue throughout the movie, delivered with a nonchalant flair that helps move the beginning of the film along with a little bit of fun: "Put your pants on. We're going for custard."

Karen The buildup of characters and storyline took up more than half of the film. But it was a predictably grimy rise and fall of a 14-year-old kid looking for the fastest way to make a dime to better his life. I was too engrossed in learning about Rick's broken home and his friendship with local African-American gangsters who took him in, as if he were another member of the family, to realize just how naïve Rick was. He had the tough guy façade, selling his father's illegal guns and getting wrapped up in selling crack cocaine. But in the end, all he really wanted was for his sister, Dawn, to return to their home, provide for his daughter, and get out of poverty. While Rick builds up a relationship with the gang, that relationship slowly diminishes after the FBI threatens Rick with throwing Wershe Sr. behind bars. While we see glimpses of corrupt law enforcement officials from the local police department to the FBI, the subject is only lightly touched on. It can be argued that while Rick was destined for his fast-paced life of crime, the FBI put him on the path to do it. What's also interesting is as we see Rick's involvement with the gang increase, gang leader Johnny "Lil' Man" Curry (Jonathan Majors) reminds him that if he's caught in a criminal activity, his sentence will be much shorter than a black man's sentence. 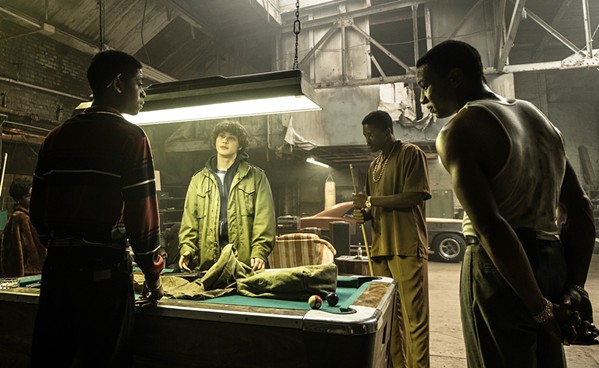 Camillia Ironically, though, the sentence Rick would eventually be forced to serve was much longer than any of the gangsters he was involved with. And this disproportionate, unfair punishment is one of the take-homes of the film, although we never really get the full gist of what exactly happens to push Rick into his life sentence for being caught with too much crack cocaine. The film rushes what could be some of the best parts, choosing to showcase too much glitz and glam of the gangster lifestyle and not enough on the corrupt law enforcement officers and political bigwigs (such as Detroit Mayor Coleman Young) who Rick is supposedly helping the FBI catch. What the film does a good job of showing are the family dynamics. Tension and tender moments between Wershe Sr., his son, and his daughter pepper the movie, where the actors get to show off their acting chops. Eventually, Rick stops being an FBI snitch and the family gets strapped for cash, so the father lets his teenager go back to the drug dealing that law enforcement officials taught him how to do. Easy money is the name of Wershe Sr.'s game, and his son is very good at it. Eventually, Rick obviously gets caught, and his glamorous world falls apart after he cuts another informant deal with the FBI. The film glosses over the events that happen next, racing to the finish. News footage of corrupt law enforcement officials on trial and newspaper headlines about "White Boy Rick," the drug kingpin, flash across the screen. I left the film feeling slightly unsatisfied, although I liked the movie and was thoroughly entertained by it.

Karen I agree, I was definitely left wanting more. I only got a taste of what Rick was going through, and I wanted more context of what was going on around him that ultimately landed him behind bars. It also seems like the writers were fixated on making the story a "father and son take on the world" bit. But it's hard to do that because Wershe Sr. clearly can't keep his family together, has an illegal side job, and pushes his son into the violent glam of drug dealing for cash that gives them the ability to do something more legitimate. I definitely enjoyed watching Rick purchase a gold necklace with a star pendant, which he comes to learn is the Star of David—and he's not Jewish. Crime and murder are genres that I enjoy watching, so in that sense, I liked White Boy Rick, but to learn about his life, I'll have to look up his documentary instead. Δ