White walls: Bringing new art into SLO can be a battle between profit and passion

It’s hard not to look up every time a pebble falls from the pyramid-shaped block of ice-encased little rocks hanging from the ceiling. Each moment of gravity is accompanied by the sharp plinks of solidly packed minerals ricocheting off hollow bamboo poles.

The sounds bounce between a largely empty cement floor and barren white walls, continuing to echo milliseconds longer than it takes for the pebble to meet its destination—a pool of water and rocks growing larger with each melting minute.

This is what art can be. Better put: This is Mineko Grimmer’s installation piece Intermittent Composition. It’s sculpture with a voice, and it’s dripping in Cuesta College’s Harold J. Miossi Art Gallery until Sept. 25.

Each day, a new triangular block of rocky ice is attached to the end of a string dangling above the vertically suspended bamboo. The pool is drained, the rocks are collected, and everything starts anew.

“We wanted this piece simply because we have such an acoustic space,” says David Prochaska, who curates many of the gallery’s shows and teaches art at Cuesta. “She brings a freezer with her.”

That freezer Grimmer brought to Cuesta in August was full of shapes ready to start dematerializing. The contemporary artist is best known for resonating installations, which depend on natural materials to be heard and seen.

Prochaska says he first saw Grimmer’s work in 1986, and has always wanted to bring an installation to the Cuesta gallery. Recently, he was reminded of that fact.

“I saw her down in Pasadena, picked up some of the pebbles and put them in my pocket, and thought, ‘There, now I won’t forget,’” he says. As if on cue, a tiny rock cascades down, crashing into bamboo, and missing the waiting pool, it lands on the cement near Prochaska’s feet.

A student crunched up against one of the walls looks up then back down again, hunching over the notepad he’s sketching on. A man bends down to pick up pebbles that missed their mark.

You won’t see anything like it anywhere else in San Luis Obispo County. And that uniqueness is kind of the point. To expose Cuesta art students and community members to art they’ve never seen before is how the art department decided to utilize a five-year grant from the Harold J. Miossi Charitable Trust. The college is entering its second year of the grant and is working to bring in pieces that can give students a whole new vision of what art can be.

“We really didn’t want to use it to bring in local artists,” Prochaska says. “We felt the best way to build viewership was to bring in outside art … something different.”

Art can swing the pendulum from crazy ugly to thought provoking to abstract to insanely weird to absolutely breathtaking, and that kind of art doesn’t always make its way into areas that aren’t urban centers. Basically, the kind of contemporary art you can see in LA and San Francisco is hard to find in San Luis Obispo, simply because of population size, the number of people who purchase art, and the number of galleries to show it.

That’s not to say local art isn’t brilliant, beautiful, and sought after. Cuesta is just seeking to expose its students and the community to as much of the contemporary art world as possible and increase the number of visitors to the gallery in the process. Prochaska says being a nonprofit makes it easier to bring in art from the outside—Cuesta doesn’t need to bring in money by selling artwork—and other nonprofit galleries in the area have a mission similar to Cuesta’s. He points to SLOMA and Cal Poly’s University Art Gallery, adding that there are a couple of dual purpose retail outlets that have dedicated gallery spaces also trying to do the same thing. For instance, Steynberg Gallery and Coffee Shop recently hosted Savages, put on by Neal Breton of SLO modern arts collective The Bunker, which brought in talent from LA, The Bay Area, and Chicago.

Prochaska says the gallery portions of businesses like Steynberg essentially need to function as nonprofits because it’s hard to make the money situation work off art sales alone.

The newest gallery to SLO’s contemporary art scene is at Left Field, a succulent-peddling shop with indoor and outdoor décor for sale that you can’t find in a Pottery Barn catalog. The items are unique, artsy, and from the beyond, just like the boxy, currently white-walled room attached to it.

Landscape expert, succulent lover, and art enthusiast Nick Wilkinson alternates between crossing his arms over his chest and shoving his hands in the pockets of his red jeans as he chats in the middle of a room in transition. 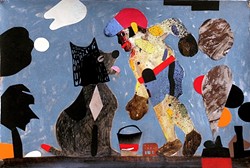 His “cube” at Left Field is basically empty except for a handful of paintings leaning against one wall, a yellow dog with a pipe in his mouth and a bong coming out of his head, and a 4-foot-tall stainless steel pot gleaming in the afternoon light. These are the remnants from the gallery’s last show: 21st Century LOLs.

The door opens and in come bubble-wrapped pieces of art by T.L. Solien from Wisconsin. Solien’s pieces will hang on the wall across from Chicago-based artist Ryan Travis Christian’s graphite drawings until Sept. 29.

Art is a big love of Wilkinson’s, and so are succulents. He owns a similar nursery and home goods shop in Cambria (minus the gallery) called Grow Nursery. Ten years ago, Wilkinson moved to the Central Coast from San Diego, where he nabbed a degree in painting and printmaking from San Diego State and was trying to “make it” as an artist by managing a restaurant, slanging strip steaks and cocktails. He had some success selling his art but was sick of working 55 hours a week.

“It was kind of like: Is this what I want to do for the rest of my life?” he says.

A space became available in Cambria, where his parents own the Cambria Shores Inn—he says his collection of succulents in vintage pots was pretty much overflowing off his patio at that point—so he decided to make a go at the nursery and landscaping biz. The venture was successful enough that he started looking for a second location in SLO Town.

“This nice, clean white cube was already attached to this space that I thought was perfect for my other business,” he says.

His longing to view the kind of art he wanted to see took over, and he reached out to his friend Christian (with the graphite drawings in the current show) to help bring in art from outside the Central Coast. The two put together a list of artists they wanted to show, and the gallery space is booked for new shows once a month through next summer.

But why outside art?

“There’s like 30 places you can go to that showcase local art,” Wilson says. “You know there’s a lot of really beautiful art made here, but a lot of it is sort of realistic. … When you live in a larger community, the art tends to be a more diverse situation.”

He wants to give people a chance to see something they wouldn’t normally see—much like the Cuesta gallery and the shows it’s trying to bring to the area.

During Art After Dark on Sept. 4, the featured artists—Solien and Christian—sat outside at a picnic table chatting with art gawkers, occasionally smoking American Spirits. It was opening night for the new show, Left Field’s fifth. Lorraine Conlen studied the images with her head tilted to one side, alone in the small space.

“It’s fun. It’s kind of like cartoons on acid,” she says. “I’m really impressed with it.”

Bright colors, shapes, and textures juxtapose goofy, complicated, gray graphite sketches—the sets of pieces are completely different but both are moody, a little strange, and cartoon-like. The artists met via the newish-tech space that is Instagram. Christian started following Solien’s feed, liking the artwork he posted, and making comments. Solien in turn followed Christian, the mutual likes started piling up, and then Christian invited Solien to put up a piece in a salon-style show he put together in Chicago. It was a duck show, literally and figuratively.

Solien, who likes the ease of Instagram, says it’s so much better to interact with a piece, see it in person. The nuances of texture become apparent, Christian says. Gazers can become thoroughly engaged with the art they’re looking at rather than flipping through flat, 2-D images posted on a feed. And if you’re into contemporary art, not seeing it in person can become a void.

“For people who are interested in contemporary art, it creates this sort of longing,” Christian says. “I went to college in the middle of a cornfield in Iowa. I mean, it was only an hour outside of Chicago, but still.”

Even for someone with that burn to see contemporary art, running a gallery is a ton of work: Wilkinson has to put together new shows every month; package, ship, and receive art; organize artists into comprehensible shows; and attempt to sell the items on the wall. And, of course, Wilkinson goes into every show wanting to sell every piece.

“But the expectation would be that you would not because we’re in a smaller market,” he says. “I wish that it were easier to sell art here, but who doesn’t.” 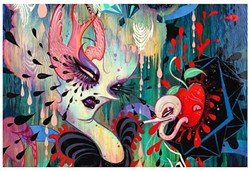 He understands that “making it” as a gallery guy can be the equivalent of trying to be self-sufficient as an artist. As he rocks back on his heels, Wilkinson says that he, luckily, has two other businesses that feed his children and help pay for his life. Talking about similar spaces, he brings up Steynberg—which ended up opening a coffee shop as a steady stream of revenue to supplement its gallery space—and Compact Gallery, which is no more.

“We’re all ready for Jeff [Jamieson] to open up another Compact,” Wilkinson says. “It was in a way an inspiration for this space.”

The point isn’t to be the only gallery for contemporary art, but for there to be as many spaces to see art—both local and from the outside—as possible, because that’s what art is all about. Sitting in Scout Coffee Company, Jamieson slams an espresso and starts pulling apart a cinnamon bun. The sculptor says it’s important to bring as many different voices to the table as possible to have a conversation about the art, society, what’s beautiful and what’s ugly, what people like and don’t like. The more you see as an artist, the more influences you can pull into your own work, the more you can critique your own work, the more you grow as an artist.

Compact Gallery closed in 2013. It was one of a couple of galleries Jamieson set up over the years. Jamieson says he loved the space because it was so open, with gigantic white walls that could be painted, lit, and transformed to fit the mood or character of the show on display.

“It’s so much work to do it well. I always had another job,” he says. “And I sold almost no work.”

But selling work is only half the point. It’s important to be able to merely get those different viewpoints out into the world and get eyes on new art work and artists. That’s why Jamieson loves places like Left Field and the Cuesta gallery; they are among his favorite SLO spaces to view art because there’s nothing to distract the viewer from the art. Displaying the show or the artist is the whole purpose of the venues: to show work and start a conversation.

“Every gallery is important,” Jamieson says. “We need every venue we can get.”