Either way, Peg Pinard and Abel Maldonado are spending money hand over fist in whatâ€™s shaping up to be this yearâ€™s fiercest battle for a California senate seat. 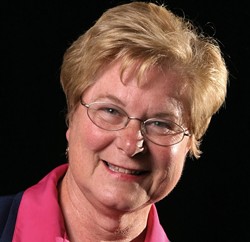 #But the election season didnâ€™t start off this way. By late June, Pinard had a measly $14,800 in her campaign coffers. Her opponent was doing quite a bit better â€” heâ€™d already amassed a little more than $1 million.

For her last campaign as a San Luis Obispo County supervisor, Pinard raised thousands of dollars. For her current campaign, sheâ€™s raised close to $3 million â€” more than three-quarters of which have come from California Democratic party officials.

And while heâ€™s never quite caught up in the dollars race, Maldonado hasnâ€™t done too poorly either. During the month of October, various Republican groups have donated more that a half million dollars. Wal-Mart, Apple, and various agriculture, insurance, and medical special-interest groups have also helped grow his total to a hair under $2 million.

When asked about how the surprisingly large sums of money have changed the campaign, both candidates were eager to list the reasons why their opponentâ€™s money is tainted to the point of almost corruption while their own bulging bank accounts are justified.

The fact of the matter is, elections cost money. And big elections cost lots of money. The reason is advertising. Both candidates have spent the vast majority of their millions on television, radio, and print ads, and the seemingly unceasing flow of mailers that pour into residentsâ€™ mailboxes.

Pinard says sheâ€™s not surprised how much money she and Maldonado are spending when she takes into account the number of media markets they both have to reach.

And she lays the blame for the number of markets in lap of her predecessor: outgoing Republican senator Bruce McPherson.

â€œThis district was so badly gerrymandered by the existing legislators that it includes five different counties,â€? she said. â€œThe district was obviously designed to serve my opponent because it goes right by his house.â€?

Pinard is right to call the newly redesigned district a gerrymander. Three years ago, Democrat and Republican bigshots in the state legislature re-planned two Central California senate districts. The Central Valley district lines were drawn to favor the Dems while the coastal district was supposed to favor the GOP. 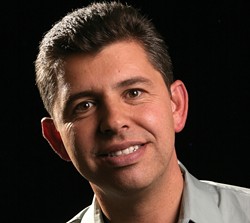 #But that gerrymandering didnâ€™t treat Peg as poorly as it might sound. Currently, the 400,000-plus registered Democrats and Republicans in this district are almost equally split with 40 percent for each party.

And while Pinardâ€™s claim that the redistricting favored Maldonadoâ€™s Republican-friendly hometown of Santa Maria is true, the new borders also encompassed her own hometown, San Jose.

â€œI had some advantage [there] because Santa Clara County is where I grew up. Thatâ€™s where I went to elementary school, high school, and college,â€? she said.

At first glance, the source of Pinardâ€™s and Maldonadoâ€™s money looks as far apart as the distance between San Jose and Santa Maria.

Pinard likes to point at the corporations and special interests whoâ€™ve contributed to Maldonadoâ€™s campaign and who, she was quick to point out, often have a vested interest in specific bills in front of the stateâ€™s legislature.

â€œMy [base is] the millions of people â€” the workers, the teachers, the nurses, the people who represent [them]. When you look at special-interest corporations and you look at my opponentâ€™s voting positions â€¦ â€? she said, trailing off. â€œLook at their money and what they get for it.â€?

While itâ€™s true that many teachers, nurses, and, as Pinard puts it, â€œworkers,â€? give money to the stateâ€™s Democrat party, corporations and special interests plug their share of change into the partyâ€™s coffers as well. AT&T, the energy giant Southern California Edison, real estate interests, and Indian gaming groups are just a few examples.

Furthermore, what about the special interest groups that directly give money to Pinard?

So if the same logic that she uses to condemn Maldonadoâ€™s contributors is turned on her own financial base, what is Pinardâ€™s response?

â€œLook at their client base,â€? she fires back. â€œTheir clients are the workers. Their mission is to look out for the workers. Itâ€™s very different then looking out for a corporation.

â€œSo yes, there are [special interest] groups. But when you look at who they are, theyâ€™re basically trying to get people to be treated fairly.â€?

Looking at Maldonadoâ€™s campaign records shows that a portion of his money comes from corporations like Microsoft and Coca Cola and big special-interest groups â€” some with financial ties to Central Coast vineyards, farmers, and doctors.

And a week before the election, a group calling itself the California Business and Affordable Housing Council jumped into the race. The group wasnâ€™t giving money directly to Maldonado, but it was spending almost $150,000 to help get him elected.

The Councilâ€™s money came from some more industry giants: Philip Morris, the tobacco giant, was backing the group with $45,000. Pharmaceutical Research and Manufacturers of America pitched in $49,500. And 21st Century Insurance, the California Building Industry Association, and Farmers Insurance gave a combined $109,400.

Maldonado doesnâ€™t try to downplay those contributions, but he does point to that fact that he has raised more money from directly within the senate district than Pinard has.

For him, that shows where his loyalties lie.

â€œAt the end of the day, I donâ€™t think Ms. Pinard is running her campaign. I think itâ€™s the folks in Sacramento. How do you expect to give someone over $2 million and expect them to call all the shots? Itâ€™s not going to happen,â€? he said.

Thatâ€™s a claim that Pinardâ€™s campaign vehemently rejects. In turn, they point to Maldonadoâ€™s voting record.

And Maldonado counters that by saying: â€œI think whatâ€™s important here is that Iâ€™ve been in the legislature for six years in a partisan office and Iâ€™ve never made my office partisan. Iâ€™ve always been independent. Iâ€™ve always voted my district â€” what I thought was the right thing for people in my district.â€?

Individual sniping aside, both candidates agree that the campaign would have been very different if there hadnâ€™t been so much money to spend.

Pinard says that she would have spent just as much time hitting the pavement and trying to visit every corner of the district that she could have, but that she wouldnâ€™t have been able to reach as many people in the various media markets.

Maldonado feels that the actual tone of the campaign would have been more civil. He likes to point out that in the 10 years heâ€™s been running for offices, heâ€™s tried to never run a negative campaign â€” something he hasnâ€™t been able to do when â€œyou have folks from Sacramento throwing out millions of dollars to destroy my name and destroy my character.â€?

Maldonadoâ€™s historical claim is hard to verify. But it seems likely that in the final days of the campaign, the mud slinging and angry rhetoric between the two candidates will get even more fierce.

And the as-of-yet-un-stemmed flow of money will keep it going.