Why volunteers choose the Y

Everyone can find the right opportunity to volunteer at the YMCA. 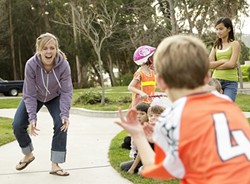 The YMCA, which was originally chartered as Young Men’s Christian Association, includes 124 national federations with a total of more than 45 million members worldwide. No religious affiliation of any sort is required to join the YMCA, which is open to both genders. The lively county local branch on quiet Southwood Drive in San Luis Obispo appears to be a typical gym at first glance: Volunteers are cleaning, members are working out on treadmills, dozens of flyers are posted on the surrounding bulletin boards. But it’s far more than that.

“The YMCA is a volunteer-based organization, our boards of directors, our committees, they all volunteer. Then there are program volunteers, coaches, child care, and volunteers at the front desk,” program director Amy Buchanan pointed out. The criterion to become a volunteer is simple: love working with people. Buchanan describes the process of recruitment, “I have them hang out with the program they’re interested in. If they don’t like that, we see where else they’d be comfortable.” The YMCA is never at a loss for volunteers but is always eager to recruit more. “It’s all about finding the right match,” Buchanan said.

Joan Newton easily found her ideal situation last year when she returned to the area. “I needed to start exercising. I’m 87 years old and not a good self-starter,” she recalled. After going with a friend to a class, she began volunteering to qualify for a free membership, “I’ve met so many lovely people,” Newton adds. “It’s an encouragement to be able to encourage someone else.” Volunteers who contribute at four hours each week get a free membership that includes access to the gym, Shinshimer pool (right next door), childcare, and numerous free classes. “We value volunteers tremendously,” Buchanan emphasized.

Russ Brown is a volunteer Tai Chi instructor. “I’m retired, I live nearby, and I think the Y is a great resource for the community; I support it in any way I can,” he said. Right now, volunteer tutors are needed for after-school “homework clubs,” at the Los Ranchos child care site, Los Osos, and in San Luis Obispo. Moreover, several times a year the YMCA hosts “fun nights” that engage many volunteers, Brown noted. “We blow up the bounce house for a three-hour event. That’s just one example of a fun, temporary commitment.”

Carli O’Leary has been with the YMCA for one year and frequently works at the children’s gym. “I was looking for a place where I could do my internship, and I wanted to look for a place that works with kids,” O’Leary said. Although she began as an intern, her hard work paid off, and she’s now part of the paid YMCA staff. A lot has changed, O’Leary acknowledges “When I began I had a general idea of what [the YMCA] was about, but I definitely learned more once I started volunteering here: How everyone, all the departments, work together.”

The YMCA values responsible, hard-working volunteers. Jamey Arellanl is a baseball/basketball coach who began volunteering to spend more time with his children. “It’s all oriented toward the kids, making sure their safe, and having a good time. I loved sports growing up, but my parents didn’t come to one game,” says Arellanl. “I remember thinking ‘when I have kids I’m going to be involved in sports if they are.’” His recommendation for future volunteers is simple: “Don’t be afraid.”

Lately there’s been increased volunteer enrollment at the YMCA with more college students taking notice. “I’ve been here a while, and I don’t remember a time when volunteers were more willing to help than when President Obama was elected,” Buchanan continued. “Seriously, it was a big difference he made. People came in [and said] ‘I want to make a difference, I want to give back.’ It’s been great.”

The program has expanded. “When I first came here it was facility based, and now it’s grown county wide,” Buchanan notes. “We’ve really spread throughout the county, from Shandon to Lompoc.” And it continues to grow. “Usually people either think of the song by the Village People or that it’s just a fitness facility. We offer child care and have an art program; we work with active older adults. People are still learning about us.”  The is YMCA is located at 1020 Southwood Drive in SLO. For information about volunteering or services offered, call the main office at 543-8235.

Intern Lisa Spencer can be contacted through the editor at econnolly@newtimesslo.com.