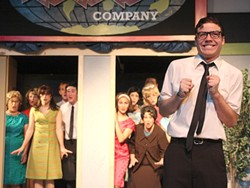 Welcome to 1963. If you’re a man, all your dreams have come true. If you’re a woman, good luck. The SLO Little Theatre’s giving lessons on How to Succeed in Business Without Really Trying, through Dec. 20, at least. And Natalia Berryman, making her directorial debut at the Little Theatre, is well suited to the task of bringing the musical world to life. She’s a professed stickler for happy endings and loves showy ensemble pieces. What’s more, she considers the show fun.

Just about any musical can be judged as having fulfilled its purpose if only the audience considers it fun. And How to Succeed in Business Without Really Trying, however inaptly named (the audience spends a solid two and a half hours watching the protagonist engage in everything short of sexual favors to get ahead), is fun. It’s fun the second the 20-or-so-person cast takes the stage and half the female audience members (and a quarter of the men) consider mugging the secretaries for their fabulous knee-length early-’60s dresses (kudos to costume designer Donna Sellars). It’s fun, and more than a little disturbing, watching the secretaries unashamedly pine for the comfort of hearth, home, and PTA.

So, yes, it’s fun. If that’s what you were looking for, purchase tickets posthaste. Read no further.

Now on to the question of whether the performance delves deeper. We already know it’s a musical. Boy gets girl. Boy enthusiastically continues climbing corporate ladder while girl is banished to the suburbs. Do the actors make it worth your while? As J. Pierrepont Finch and Rosemary Pilkington, Joe Ogren and Ariana Shakibnia are as adorable and well-cast a leading man and lady as I’ve seen on the Central Coast. Ogren’s the very portrait of youthful ambition and energy, an unlikely meld of innocence and cunning. He’ll rise to the top, and you’ll enjoy watching it as his silent confidante (or perhaps not so silent in the case of the woman next to me. Truly people, you don’t need to loudly exclaim what is happening. It’s a musical. Not Memento.)

And Shakibnia is the perfect helplessly in love secretary, eager and sweet. “I’ll be so happy to keep his dinner warm ... to bask in the glow of his perfectly understandable neglect,” the pretty little non-feminist sings after their first meeting. According to Berryman, the actress is a freshman in high school, making her performance all the more remarkable. Beyond being equal to the music and stage time, Shakibnia masters the details, the dynamic facial expressions and gestures that a musical demands.

For all the mass appeal of an ensemble piece—it’s hard to go wrong with 20 figures whirling and gyrating on a desk with rollers—the segments between two or three performers were more truthful. Yeah, songs like “Coffee Break” have a wide appeal, but essentially the song is saying what we already know to be true: Americans are addicted to coffee, an affliction that often manifests itself at work. Songs like “Happy to Keep His Dinner Warm,” sung by Smitty (Caryn Hall) and Rosemary are far more revealing. Rosemary reveals that yes, she’s gunning for marriage. But, unexpectedly, she also understands the hazards. Her newlywed businessman husband will ignore her. He’ll be busy with his terribly important business matters but she’ll consider herself fortunate just to keep his dinner warm.

While quieter, and certainly less shiny than the ensemble pieces, “Been a Long Day” is rather sweet, sort of a welcome quiet after the flurry of noise and movement that dominate the other songs. Ogren and Shakibnia are strong enough performers to give the song some flare, with some help from the comical Smitty.

There’s a blessedly tongue-in-cheek quality to the lyrics and dialogue. We don’t have to believe that Finch and Rosemary ride off into the suburban sunset. We know that Rosemary will be bored as hell. But she plays the part so well, with such breathless anticipation, that we believe she genuinely covets that lifestyle. And when Twimble (played memorably by Chris Rush) takes Finch under his wing to give him the scoop on how to succeed in the mailroom, his earnest and comic advice is entertainment gold. Everyone knows (and probably pities) a Company Man, like Twimble, for whom the only route is the company way
and the company letterhead is
a valentine.

As protagonist Bud Frump, Cody Pettit shines. He’s conniving and ambitious without really possessing any redeeming qualities or skills. Much like Finch, actually. Best I can figure, Frump is the bad guy and Finch is the good guy because Frump has dark hair and Finch is fair. That’s the way these things work, right? But along his villainous route, Pettit’s face twists into some memorable grimaces and tics. In Pettit’s capable hands Frump is a great character.

Because the singing and choreography is technically efficient and (mostly) error-free, the production really shines when it reflects the horrors and comedy of corporate life. Setting is key. Finch’s book, the catalyst for the entire production, really, encourages him to select an office environment that is large, ensuring that nobody is really certain of what everyone else does. What you wind up with is the World Wide Wicket Company in all its dysfunctional glory. A world where the suits flirt with their fellow suits in an effort to get ahead, but they must still be reminded that “a secretary is not a toy, no my boy” while they greedily leer and grab at the ass of their non-toy.

There are a lot of set changes, 20 to 30 seconds of darkness while desks and washbasins are wheeled on and off stage, which makes the pacing awkward. In some cases the change of set takes longer than the actual performance. This is hardly a fatal flaw but it’s jarring enough that it takes a split second to get back into the spirit of the show. Plus, aforementioned audience members seemed to view it as a green light to get chatty with neighbors. Bad form, theatergoers.

But overall fun, fun, fun, just as Berryman was hoping. All of which leaves us with just one question: what is a wicket?