Wild and precious in Paso

Sand sculptors, stiltwalkers, artists, and more converge on the Paso Robles Festival of the Arts

Doesn’t everything die at last, and too soon? Mary Oliver asks in her exquisitely simple poem “The Summer Day.” Tell me, what is it you plan to do/with your one wild and precious life?

Sasha Irving, programs director of Studios on the Park, first heard “The Summer Day” read during Mass, she said. The poem’s themes of communion with nature as a kind of prayer, its expression of wonder at simply being alive, and its final challenge to the reader—what is it you plan to do?—seemed to fit perfectly with the spirit of the Paso Robles Festival of the Arts, the event started five years ago by Irving and her mother, Studios on the Park founder Anne Laddon. “Wild and Precious” is this year’s theme, and the title of a corresponding art show juried by oil painter Elizabeth Tolley and opening Memorial Day weekend in conjunction with the event.

The festival has always celebrated the intersection of art and the natural world. Plein air painters from around the state and beyond converge on the city park every year to exhibit and sell their work, with painters Jeanette Wolff, Dotty Hawthorne, and Erin Hanson ranking among visitor favorites. A Plein Air Quick-Draw event gives artists two hours to paint scenes of Paso, which are then framed and auctioned off for charity—often before the paint has dried. Meanwhile, environmental displays use art to educate about environmental concerns and projects such as the Salinas River Corridor, a vision that would include enhanced recreational trails along the Salinas River. (Did you even know Paso had a river?) Festivalgoers who bike to the event can take advantage of a free bike valet service. 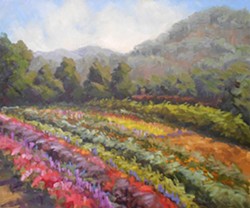 Paso’s artistic scene, much like the wine industry that so often fosters it, seems strongly connected to the land—down-to-earth in the most literal sense.

“We’re not like Napa,” Irving said. “If you show up in town and you make a good wine, you’re going to be acknowledged. And I think the same is true of our artists.”

Studios on the Park opened in May 2009, just two weeks before the inaugural Festival of the Arts. In that time, the city of Paso has begun a quiet artistic Renaissance, with several fine art galleries setting up shop around the city park, and a monthly art walk leading viewers through the tasting rooms, studios, and other art venues throughout town.

Of course, like Paso, the Festival of the Arts (taking place May 24 to 26, with the main event happening on Saturday, May 25) is still finding itself. Perhaps this is why the event packs such an extremely wide variety of attractions, making for an almost carnivalesque atmosphere. Here are a few not to miss. 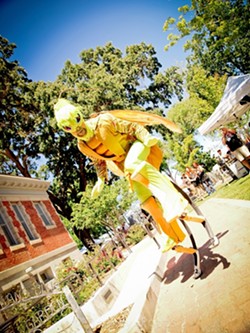 State of the Art

A keynote address by Jean Stern, executive director of the Irvine Museum, kicks off this evening of wine country dining at the Park Ballroom, followed by an after party at Studios on the Park. The $65 ticket goes toward the purchase of a painting at Saturday’s Plein Air Quick-Draw Auction.

Born in Morocco and raised in California, Stern is an authority on California Impressionism. His illustrated talk “California Light: Painting En Plein Air” will highlight the history of the plein air movement and its migration to California, as well as its most important players. Stern comes from a family of art dealers and began collecting the work of California Impressionists as a grad student, when such work could still be found in antique stores and even at Goodwill. Demand for work from the period—which Stern says lasted from 1895 to 1930, coinciding with a population boom in Southern California—didn’t start picking up until the ’70s.

Stern’s talk will show work from now-renowned California Impressionists, as well as contemporary plein air painters—some of whom will be in attendance.

It wouldn’t be the Festival of the Arts without the Dragon Knights Stiltwalkers. Founder Lili Noden pursued theater in her native France before joining the Cirikli Stilt Birds, a troupe of stiltwalkers who performed astride enormous puppet birds. When the Cirikli was invited by Disney to perform at EPCOT Center in Florida, Noden moved to the United States, eventually forming her own San Diego-based performance group. Noden trains each new Dragon Knight herself and crafts each puppet by hand. Each character, of course, has its own unique personality, from the fierce dragon Baraka (who can be tamed by children with the courage to try!) to Corto, the playful pink flamingo, to Gryphon, the mischievous bird-animal.

The Dragon Knights have been performing at the Paso festival every year, and according to Irving, have become one of the event’s biggest draws.

Don McCleod never thought his work in theater, film, and television would lead him to found a company of human mannequins, but that’s exactly what happened. McCleod has studied theater, mime, and Butoh, and, for a while there, was best known for playing gorillas (after his performance as an extremely over-sexed one in the film Trading Places, offers of film and television parts for gorillas just kept coming in, he says). He also founded a mime company, but found that while miming was falling out of fashion as the province of, in McCleod’s words, “obnoxious street people who made fun of you and then wanted a dollar for it,” demand for living statues was on the rise. In the ’80s, McCleod founded Living Statues and Mimes, a company offering the highly unique service of pretending to be inanimate at corporate events. The statues do move, of course, but very slowly: each Living Statue is trained in Butoh and mime, and many in McCleod’s company come from theatrical or dance backgrounds.

A Festival of the Arts performance will feature company members Jessica and Gary Ostrander, a husband and wife duo. She’ll play a classic Greek statue. He’ll be a bronze man. ∆

Arts Editor Anna Weltner is marble. Contact her at aweltner@newtimesslo.com.