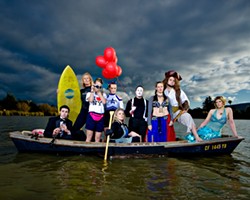 New Times’ Spring Arts issue this year is a two-part affair, with each segment exploring the relationship between contemporary society and words. This relationship changes with each generation but is of particular interest as fewer and fewer Americans engage in traditional forms of reading—books, poetry, and the newspaper—and familiarity and use of language becomes increasingly bound to technology. Does a generation that has adopted phrases like “lol” and “ttyl” interact with language in the same manner as one that has not? Perhaps more interesting still, when people are constantly barraged by words whose purpose is solely to sell them something, is language devalued? Have we forgotten that words are the building blocks of an art form?

Our aesthetic approach to Spring Arts this year is surreal because our relationship with words has become surreal as well; they don’t always mean what we think they do, and often we’re not really sure what they were supposed to signify in the first place. René Magritte, in particular, was a favorite source of inspiration, as suggested by our cover, which was painted by Glen Starkey in imitation of Magritte’s famed The Treachery of Images.

This exploration began with a series of idioms: “all in the same boat,” “cock-and-bull story,” “crying over spilled milk,” “don’t put all your eggs in one basket,” and “zip your lips.” Photographer Steve E. Miller and I re-imagined these phrases literally, ambitiously incorporating one docile bull, more than 20 models, 5,000 chickens, one gallon of organic milk, a rooster named Elvis, and Glen Starkey’s sort-of-seaworthy vessel (The Mudhen) in the process. As always, our collaborators—and there were many—chose to participate purely for the playful purpose of expressing and exploring creative potential.

Perhaps, despite the old adage about sticks and stones, when we give pause to consider the true significance of our words, they will accrue greater weight. Or maybe simply make us laugh at the absurdity of language, or the futility of communication.

Part two of this effort took place in the streets and on the sidewalks of Arroyo Grande, Grover and Pismo Beach, San Luis Obispo, and Cambria. I scoured the county’s public spaces for words, and found thousands. Most were threatening or utilitarian, words like “no,” “police,” “exit,” and “parking.” But sometimes, usually in storefronts, they were captivating, alive with meaning for all of the five senses. Words that Emily Dickinson would tip her hat to, such as “apothecary,” “capers,” “chronicle,” “divinity,” and “liberation.” Words sturdy in a bronze plaque or bold, stenciled in red on the sidewalk. Some were hastily scrawled on a menu board, or as matter of fact as a street sign. A few were illegal. 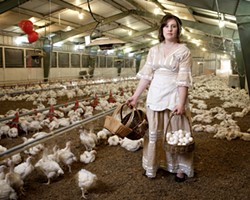 The purpose of the exercise was to discover and expose narratives of space, the stories these words might tell, tales that can’t possibly exist elsewhere because these words are our own. San Francisco might have word poems too, steeped in fog and climbing like its streets, but they wouldn’t look or sound like ours. Or Los Angeles’ either, for that matter.

We wanted to create something beautiful from all of the words bombarding us with commercial messages and commands on a daily basis. So, we gave the word photos to four local poets and asked them to re-assemble these narratives using only the words from the photos we had given them, a word puzzle and magnetic refrigerator poetry all in one. As they worked, they selected their words, not only for their definition, but also for color, texture, font, and size.

The four brave wordsmiths who embraced our challenge were Arroyo Grande-based poet Bonnie Young, a former elementary school teacher whose work has been published in Flyway, The Midwest Quarterly, Rattle, Thema, Café Solo, and Women’s Press, along with several newspapers; painter, photographer, poet, and former art instructor Nixson Borah, who now resides in Atascadero; Los Osos resident Dian Sousa, a founding member of Code Pink and poet laureate of SLO County in 2008, whose work includes the anthology Lullabies for the Spooked and Cool; former San Luis Obispo resident Rachel Kann, an instructor for UCLA’s Extension Writers’ Program who performs her poetry with daKAH Hip Hop Orchestra. Her accolades include a James Kirkwood Award in Fiction and a Backstage West Critic’s Pick Garland Award, among others. 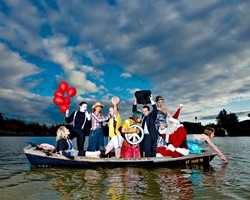 This quartet shaped the mass of words that we gave them, at once pruned and sheared them down to their purest essence and magnified them beyond anything they could have expressed on a menu or billboard.

Perhaps, in our exploration, we bit off more than we could chew, danced out onto a limb from which we could not return. But hell, adding fuel to the arts community’s fire is what we’re here for.