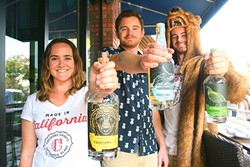 It’s about more than the fact that Marketing Director Beaton is wearing a furry bear suit, a la the California state flag (and that’s not just the booze talking). Beaton—who, like his partners, graduated from Cal Poly in the not too distant past—is actually wearing a full-on bear suit complete with claws and cute little ears.

We’re sitting at the community table at La Cosecha, Paso Robles’ premiere Latin American-inspired fine dining establishment, and no one seems to find it the least bit odd.

Behind the bar, stoic, bearded mixologist James Schank is vigorously shaking up creative cocktails starring all of Calivore’s debut offerings: a subtle blonde rum, a Big Sur-inspired botanical gin, and a sophisticated spiced rum that goes down surprisingly smooth (of which I am currently plumbing the depths).

Made with sweet orange peel, cinnamon, ginger, and nutmeg, the sunset-colored offering aged in merlot barrels feels like the perfect way to honor the end of summer, a raging beach bonfire in a glass. The drink—which Schank named for that feeling of sudden, shocking weightlessness that strikes when you step out off of an undersea shelf—is disappearing fast.

“The tide during the summer gets really high at Pirate’s Cove, and there’s all these rocks. One moment you’re walking and the next there’s nothing beneath you,” says Sales Manager Nejame, the lone female of the group. She, like her cohort, is in her early 20s, yet would rather sip a Hot Toddy than connect with the business end of a beer bong.

“Who are these millennials?” I keep asking myself.

I soon find out: They are the kind of millennials who don’t just attract attention with their obvious locavore ideals. They attract investors, too. Thanks to some help from the Cal Poly Center for Innovation and Entrepreneurs (CIE), the team has completed such soul crushing phases as business planning, execution of product, logistics, and limboing under yards of legal red tape. 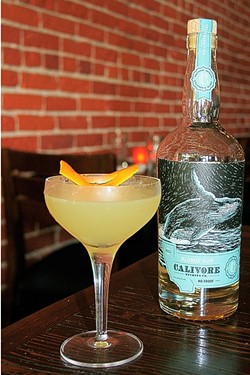 They’ve even begun supplying their beautiful glass bottles to local restaurants and select area liquor stores (look for the hand-drawn, embossed images of local wildlife on the label).

Bergh, the distiller and philosophizer of the group, explains why Calivore’s not just another flash in the still. Thing is, he doesn’t really need to explain. The drinks do all the talking.

“For the blonde rum, we start out with raw sugar cane, U.S. grown, straight from the plantation in Louisiana,” he says. “We ferment it with wine yeast, and that’s what gives it that really mellow, clean flavor.”

The liquor is distilled once, which allows the booze to retain an earthy vibe. It also spends some time aging in a used chardonnay barrel, which imparts a bit of oaky, subtly fruity allure.

Yeah, all of their offerings are like this: Each is a thesis all on its own.

The first thing that hits me is the 12 botanicals and herbs, which beckon a second, a third, a fourth whiff. Native white sage, yerba santa (aka “mountain balm”), elderberry, chamomile, and fennel transport me to that coastal wonderland off Highway 1 (minus the smoke from raging wildfires).

“It’s not your grandpa’s gin,” Bergh says, adding that the ingredients include the requisite juniper, lemon peel, and coriander, but also earthy bay leaf and floral lavender. The base, made from premium California wine grapes, is silky smooth on the tongue.

“I was not a gin person,” admits Beaton, who—like me—is now a total convert.

You could call local booze the hipster trend of the moment, but that would be oversimplifying the sea change that’s occurred in cocktail culture—a culture where quality is now the norm and no one aims to make the same drink twice. What’s wrong with that?

If you ask the fresh faces behind Calivore, “local” and “creative” do not have to go hand-in-hand with a snooty demeanor or waxed handlebar mustache.

“We make really high-quality spirits, but we don’t aim to be luxury,” Beaton says of the lineup, which will soon welcome in a fourth flavor. “Anyone can taste our products for themselves and enjoy it.”

Kind of makes you wonder how the group decides between staying in with a few cocktails or getting outside in the fresh, California air—their other passion (hiking, camping, they do it all). I guess if you try hard enough, you can somehow combine both the thrill of the outdoors and the chill of a perfectly balanced cocktail ... you just have to try really hard.

If you look close enough, California is in the mix, somewhere between the ice cubes and the aromatic bitters.

Hayley Thomas believes in hiking with a cocktail shaker in her fanny pack. She can be reached at hthomas@newtimesslo.com.