If the only hard cider you can think of is sweet, syrupy, and comes with an annoying tagline, you’re drinking it all wrong. Don’t take it from me; take it from the English, who have been drinking the stuff since a few mischievous deer discovered the magic of fermented apples left to rot under an unsuspecting tree.

They knew—and we Americans are beginning to understand—that hard cider comes in all kinds of tantalizing styles (none of which should ever smack of off-brand apple soda). Whether you prefer resinous, skunky dry-hopped versions akin to your favorite IPA, barrel-aged cider with a twinge of bourbon smokiness, unfiltered scrumpy cider swimming with rustic particles, or single-varietal juice with a sour kick that’s all the rage with the kids today, you will find it at the Central Coast Cider Festival. Come one, come all, come thirsty. 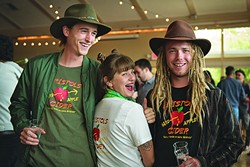 “The cider revolution is sweeping America, and our region has been on the forefront of this delicious trend that complements the area’s wine and brewing scenes,” said Neil Collins, founder of CiderFest and owner of Bristols Cider in Atascadero.

Now in its second year, the fest promises to offer up classic, creative, and wildly imaginative hard ciders that prove winemakers aren’t the only ones who deserve loyal groupies and fancy dinners. It’s all frothing to a head this Saturday, May 13, at the Atascadero Lake Park Pavilion.

New this year, customers will be able to purchase bottles and cases of the cider they taste, thanks to CiderFest’s retail partner, 15C Wine Shop & Bar in Templeton.

If you think the local craft beer scene is exploding, just look at the Central Coast hard cider industry, which—just 10 years ago—was barely the size of a malnourished crab apple. These days, newcomers are taking on the “apple rush” with gusto. The guys at Jean Marie Cidery, established in 2015, are fresh faces with grand dreams.

It all started with a spontaneous trip to Big Sur, when Connor Meznarich and Branden Welshons bonded over the idea of “crafting the finest hard cider on the planet.” “Jean Marie” honors both their mothers’ middle names, so you know they already have two diehard fans.

“I have three jobs and my partner owns two companies; that’s one of our biggest challenges,” Meznarich said. “After 6 p.m., we’re working on cider, juggling our time, doing everything from making, bottling, capping, labeling, and selling.”

This scrappy cider company has made it happen, growing from 750 gallons in 2016 to nearly triple that amount so far this year. You can find their bottles at select stores from Paso to Oxnard.

“All of our ciders are bottle or keg conditioned, so we will use a champagne yeast and add different kinds of honey to the bottle to add that second or third dimension of flavor,” Meznarich said. “The result is still very dry, with the honey fermenting almost to completion.”

“It has a little honeycomb spiciness,” he said, adding that the other offering is the polar opposite: a funky farmhouse cider fermented with a saison beer yeast (yep—that means it’ll make you pucker). A new release called Sunday Brunch will come to fruition at Libertine Brewing Company in SLO this Sunday, May 14.

The guys buy fresh-pressed juice from an outside source in the Pacific Northwest, but that isn’t the only way to go.

Gopher Glen Apple Farm in See Canyon has been growing its own apples since the 1970s, entering the estate-grown cider game about seven years ago. Fresh, nonalcoholic cider is available all year long at the farm stand; limited quantities of hard cider is available seasonally (mark your calendars for a July release party). Gopher Glen farmer Raven Smith said it all really depends on Mother Nature.

Last year, the farm’s apple harvest was on par with the average, but in 2015, at the height of the drought, the Smith family only brought in about 15 percent of their normal haul.

“There is so much growth in the cider industry, and there is room for everybody,” she said. “It’s good for our community because we can be known as an apple and now a hard cider region. We are known for our wines, but we also have these really good ciders being produced right here.”

Hayley Thomas Cain is bobbing for apples. She can be reached at hthomas@newtimesslo.com.