Will perform for a venue

After seven years and countless family-friendly musicals, Kelrik Productions has found itself without a home.

The beloved local theater company, led by artistic director Erik Austin, had long been based at Unity of SLO, a trans-denominational church in San Luis Obispo. In early May, Unity’s board of directors opted to sell the 13,000 sq. ft. church building, citing financial pressures. The building sold for nearly $2 million to a contractor, who plans to demolish it and build condos on the 69,696 sq. ft. lot. 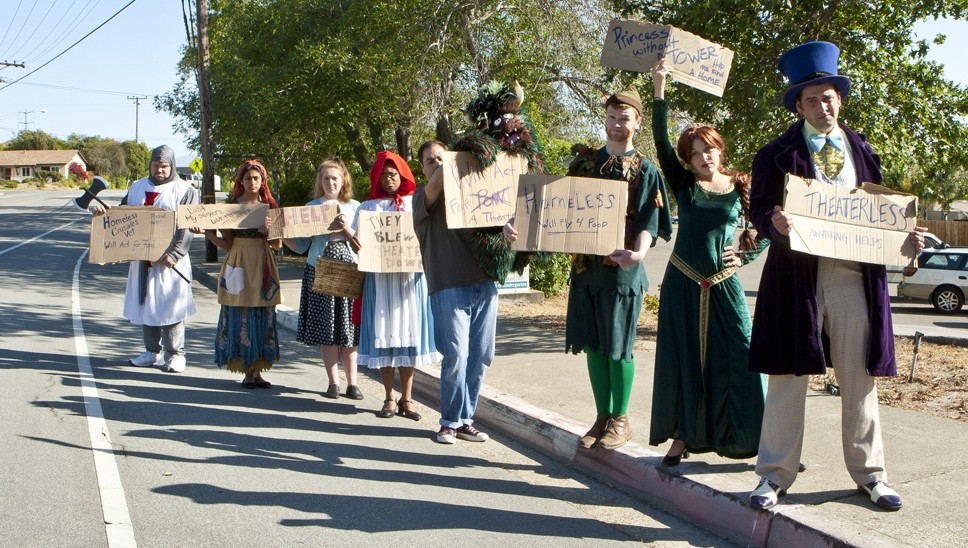 On May 31, Kelrik announced the news and asked for the community’s support in finding a new venue. The press release was understandably dramatic.

“Founder and Artistic Director, Erik Austin, is stunned and saddened to hear the unexpected news but remains confident and optimistic while he finishes the current season and searches for a new home for the company,” it read. Kelrik’s last show at Unity, it went on, would be Urinetown, “a hilarious and intelligent romp [that] will bid a fond farewell to a stage so many have loved.”

Kelrik has been in operation on the Central Coast since relocating from Los Angeles in 2004. The company’s relationship with Unity began under what Unity minister Leona Evans called “emotional circumstances”: another theater company had been gearing up for a staging of Oliver, she says, but that company’s directors had left town, and the production was flagging. An overwhelmed Evans was introduced to Austin through the Montessori Children’s School, where he worked at the time. With opening night just two weeks away, Austin took over the show.

“He did an amazing job,” recalled Evans. “I’ve called him my angel, because he saved the production.”

A former Broadway actor and singer, Evans is no stranger to the stage herself. (The minister had even starred in the first few productions staged by the church, which included Gypsy, Hello, Dolly!, and Mame—alongside a very young Zac Efron.) Perhaps it was Evans’ theatrical background, Unity’s inclusive message, or Austin’s charisma, but both parties said the church and the theater company have never had any problems getting along—even after Kelrik introduced its more adult-oriented After Dark series, which kicked off with the raunchy puppet show Avenue Q, followed by The Rocky Horror Picture Show and Sweeney Todd.

“We’ve never had a conflict,” Austin reflected. Evans agreed, conceding that the relationship had been rewarding, if not always logistically easy.

Over the past few years, in an effort to mitigate the costs of maintaining its considerable property, Unity had been renting to several local nonprofits—in addition to providing a venue for both Kelrik and the local Montessori school. Recently, however, Unity’s board of directors concluded that relocating to a smaller venue would take a great deal of pressure off of the church.

“The struggles in maintaining our church have taken us away from our prime direction of providing to the communities’ spiritual needs in a way that Unity principal [sic] dictates,” explained Keith Hamilton, president of the board, in a letter to Evans dated May 1. “Fund raising and the constant need to maintain our extra large property has done little to foster our consciousness of providing proper spirituality and nurturing of the inner spirit of God within us all.”

While Unity, like Kelrik, is now searching for a home, Evans made it clear that it was by no means the end of the congregation. Unity itself will go on, she said—even if its members have to meet in the park for Sunday service. As for Kelrik, Evans was equally optimistic.

“I know and I can affirm that they are going to their higher goal,” the minister said.

Saying that musical theater is Kelrik’s specialty is like saying Cookie Monster has a bit of a sweet tooth. The company has staged everything from Andrew Lloyd Webber’s Cats to High School Musical to Pinkalicious—a play about a girl who can’t stop eating pink cupcakes—which broke house records in ticket sales. While Urinetown is the company’s last show at Unity, Kelrik still has one last trick up its sleeve: Shrek, The Musical, directed by Austin, will open July 12 at the Spanos Theatre.

Over the past four years, the theater company has also been supporting local nonprofits through the Kelrik Cares program, tying in philanthropic causes with the theme of each show.

“The goal of it was to give back to the community,” said Austin. “We donated to the Aquatic Center for Little Mermaid, and the Humane Society for Cats. ECOSLO for Urinetown. I think that, when you help others, you can’t help helping yourself,” said Austin.

“That’s from Avenue Q,” he added, after a moment.