There will soon be better ways to reach a pair of South County surf and beach spots, though not everybody's happy about the news. The city of Pismo Beach has already begun replacing the Wilmar Street beach access stairway and is scheduled to construct an entirely new staircase on Beachcomber Street in Shell Beach sometime next summer. 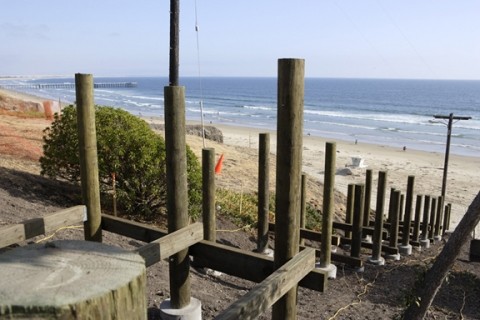 # Dennis Delzeit, the Pismo Beach Public Works Director, said the rickety Wilmar staircase was more than ready for a face-lift due to years of oceanic abuse. Its last major repair was in 1978.

"The deck was built many years ago and the marine environment took its toll on the wooden structure and it was ready to be replaced," Delzeit said.

The construction of the Wilmar project started May 16 and is scheduled to be completed July 19. The construction contract cost is approximately $185,000, and the total project budget which includes construction, design work, engineering, inspection, testing, and incidental costs is $218,000. Funds will come from the city's general fund. The structure will be wooden with brackets and support angles made of stainless steel.

A couple of miles north, a completely new beach access staircase is expected to be installed within a year.

The city's initial plan was to construct a natural stairway, similar to the Cliffs' beach access, at either the treacherous Silver Shoals path or the sewer pipe access on the south end of Beachcomber Street. But since the city did not have easements in those locations, they held a public hearing to evaluate the options.

According to Delzeit, years ago the planning commission decided to seek a new stairway in Shell Beach to provide easier access to the beach. So they created a developer fee in the 1980s that required developers pay a fee for every house they built in an effort to raise money for a future beach access.

Delzeit said the Beachcomber Street access will be a wooden staircase constructed from the top of the bluff to the sands on the bottom. The construction of the Beachcomber stairway is tentatively scheduled to start next summer. The total project cost is an estimated $550,000, with the source of funds coming from a combination of developer fees, general city funds, and grant money.

"There was a survey done of the interest of the community and a beach access ranked as one of top three priorities, with the others being street improvement and drainage," Delzeit said. "Based upon that survey of the city, it should be very well-received."

"If there's stairs, it's going to ruin a lot of people's times especially the party scene," said avid beachgoer Ashley Rains. "It's going to draw a lot more families and tourists and that beach is cool because it's a local beach. Shell Beach is different than every beach because it's secluded. I like the idea of having to trek down there, it makes you feel like you're somewhere else not like stepping directly onto the sand from a car in Avila."