What happens when you take a really good songwriter and lyricist and team him with an amazing multi-instrumentalist and arranger, and let them do their thing unencumbered by a major record label, expectations, or a need to made loads of money? You get Photo Op, the new 11-track CD by former Café Musique band members Eric Williams (the arranger) and Craig Nuttycombe (the songwriter), who've formed the new duo Williams & Nuttycombe.

The disc is packed with charm, sparkling musicianship, amazing guest performances, and whimsy. It was wholly unexpected, too. A couple of years ago I wrote about Nuttycombe's previous CD, and he thought it might be his last.

"You're right, Glen. I did think the last album might be my last, but then the goddess of love smiled and winked at me, and lo and behold more songs started coming out of my proverbial woodwork," Nuttycombe said. "Ain't love grand! So yes, it's an album of love coming, love going, and love in the middle, and love definitely was and always is on my mind."

As good as Nuttycombe is, his talent is amplified by Williams thoughtful arrangements, instrumentation, and backing vocals.

A great example is "Ever Even Here," which chronicles a failed relationship. 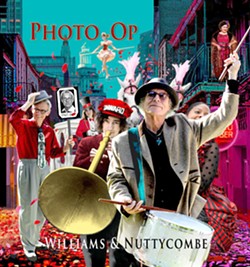 "That's one of my favorites!" Nuttycombe said. "I enjoy Eric's and my vocal harmonies, not to mention Eric's lovely waterfall guitars."

"Desire" is about blooming love: "I used to tip my hat to you, you never had much to say, and out of the blue you opened up and now here we are on our way." Williams' piano work is fantastic!

"I have such great respect for Eric," Nuttycombe said. "As well as producing and arranging the album, he plays most of the instruments and sings. It's a nice blending of energies, where I present a song and Eric brings it to a life. When we began recording these songs, it became quickly apparent to me that this was a 'Williams & Nuttycombe' album and not just another 'Nuttycombe' album. It's also nice to have another name to blame when people like it, or don't."

The arrangements are really amazing, and Williams says he puts them together in his head: "almost subconsciously in my mind, and over several three- to four-hour sessions, I just put the parts down one at a time, already hearing them mentally."

“You were here. Now you’re gone. Spent some time moving on. Like the wind, so it blows, but you don’t get to choose where it flows,” Nuttycombe sings before Swearingen comes in.

What was it like singing with her? I’d guess intimidating!

“‘Now You’re Gone’ with Inga is another favorite!” Nuttycombe said. “I thought when I wrote the song it was going to be an instrumental, but then words came, and then I thought maybe a duet, and then I thought maybe Inga, and she was kind enough to partake. I love hearing our voices together! The thing about Inga is, she’s as wonderful a human as she is a talent, and that’s a right nice combination!”

The song sounds like an instant classic, as if it could be a jazz standard. The title track, “Photo Op,” is also really unexpected. It sounds dirge-like, almost a lament, but the words are about a man deeply in love. I especially love this line: “And maybe I’m scared, maybe I’m not. This whole thing’s just a lesson in faith. Whether you’re my saving angel of love or whether you’re my best mistake.” Brilliant!

“It tickles me you like that line in ‘Photo Op,’” Nuttycombe said. “It’s one of my favorites as well—one of those lines that wrote itself. Speaking of Photo Op, I want to give a big nod to our friend Jim Dultz who did the cover art. I suggested to Eric Photo Op for a title, and because of the New Orleans-sounding horns on that song, Eric thought up the New Orleans funeral march/second-line kind of scene, and Jim Dultz created this Felini movie for a cover. Too cool!”

You can hear the album’s title track and watch its accompanying video on YouTube. The photo-montage video was put together by another former Café Musique member, Duane Inglish.

There’s so many great songs! “Wondering” as super fun instrumentation, again thanks to Williams, and it’s such as quirky little number it bordered on novelty. It may be my favorite.

The album ends with a Beatles song, “If I Fell.”

“I’ve loved [that song] since I first heard it in high school,” Nuttycombe said. “I can remember trying to learn it, sitting in my car, playing it to my girlfriend. Over the years I find myself playing it from time to time. At some point I asked Eric what he thought about trying it, and so being as he also is fond of the song, we gave it a go. Let’s face it—nobody’s going to do it better than The Beatles and we didn’t set out to. We just had fun singing it and paying respects to a great band, two great songwriters, a classic song, and a gentler place in time.”

This album is a tiny miracle. You can order it online at craignuttycombemusic.com.

Dan Curcio of Moonshiner Collective is "doing a Friday night acoustic cocktail hour set this Friday, May 1, on Facebook Live through the Moonshiner Collective Facebook page (@moonshinercollective), which I've been doing every Friday at 5 p.m.," Curcio explained. "I have a different theme each week, and this week will be rarely played covers and originals. Also, gonna do a kids-song-themed stream through the same platform on Saturday, May 2, at 10 a.m., so the parents can chug mimosas (or Everclear) while the kids are distracted for a minute." Count me in!

Shameless is arguably the county's hardest working bar band, and this Saturday, May 2—after being forced on hiatus thanks to COVID-19—they'll do their very first livestream concert from 3 to 5 p.m. on their Facebook page (@Shameless-CA-169616853059950). They play a lot of familiar covers, but hopefully they'll play one of band member John Wessel's originals, "No Laughing Matter," in which he "basically predicted this happening as far as us being the laughing stock of the world two years ago because of our choice of leaders," he said via email. "No laughing matter the world is falling apart, our choices for leader make us the perfect mark," the lyrics go. Catch some haunting country with a dose of red dirt thrown in when the Shawn Clark Family Band streams a "here nor there and everywhere" concert this Saturday, May 2, from Clark's personal Facebook page (@shawnclark77) as well as the Raconteur Room's Instagram page (@theraconteurroom) from 7 to 9 p.m. Clark's an amazing songwriter who surrounds himself with terrific musicians. You might hear fiddle, pedal steel, mandolin, stand-up bass—who knows? But Clark will be there with his voice, his guitar, and his songs.

Paul Irving of Big Big SLO continues to host livestreams on his SLO House Party site (bigbigslo.com/houseparty). This week he's starting a Pozo Saloon series from their Shelter Stage, which on Sunday, May 3, will start with soul-grass act Miss Leo & Her Bluegrass Boys from 3 to 4 p.m., followed by Americana power duo The Turkey Buzzards from 4:30 to 5:30 p.m. Pozo Saloon is selling takeout, and Irving recommends you take the beautiful drive out, pick up some delicious Pozo chow, drive over to Santa Margarita Lake and tune in to the livestream and enjoy a late lunch! SLO House Party is also hosting Classinova (Brynn Albanese's classical trio), which is playing a livestream fundraiser for Hospice of SLO County on Tuesday, May 5, from 5:30 to 6:30 p.m. Tune in and help out!

Erin and the Earthquakes continues to play their Small Business Sundays streaming shows, which raise money for local small businesses. "So far, our local community has raised over $1,000 for local business!" Erin said via email. "So generous! We stream at facebook.com/erinandtheearthquakes." This Sunday, May 5, they're playing to raise money for Grey Wolf. Upcoming fundraisers include Caliwala Market (May 10); Mongos (May 17); and Two Broads Ciderworks (May 24). Shows stream from 4 to 6 p.m. Erin's got a great voice! Tune in and donate to local businesses! 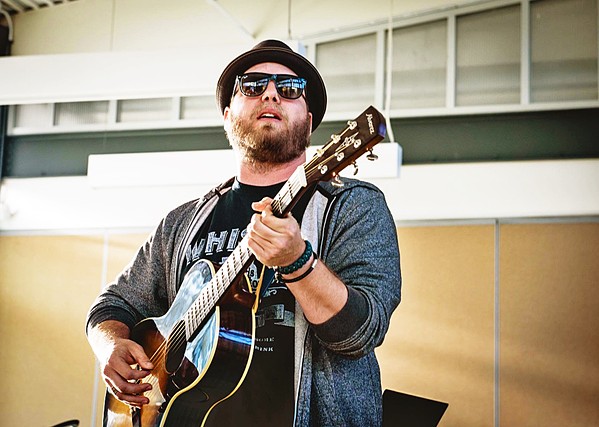 Soulful Americana singer-songwriter Matt Saurez plays a weekly "Gettin' Weird Wednesday's @530/Beer30" on his Facebook page (@mattsuarez7). Matt's got such a cool back-porch vibe, and his songs are dripping with positivity. It's exactly what we all need to hear right now! Check him out on Wednesday, May 6. "I'm streaming every night on Twitch.tv/mattsuarezmusic at 10 p.m.," he wrote via email. "Folks can find updates on my website daily at mattsuarezmusic.com. Stay safe and healthy!"

One thing the quarantine has been good for is artists' creativity and collaboration. When you've got a lot of extra time on your hands and few gigs, you've got to do something, and for violinist Sal Garza (Downey Mildew, Candlelight Strings), multi-instrumentalist and programmer James Edward Theobald, and vocalist Princess Johnson, that means forming Blue New Clear Dream (BNCD) and recording "Say It," their debut dancey trancey club track available on YouTube.

"I bring you good tidings in the midst of strangeness, and good positive messages from the ethers," Garza said via email. "BNCD is my most recent musical effort. I have been working with super geniuses James Edward Theobald and Princess Johnson, both of Morro Bay. Funny how MB is a great turnout of the muses. 'Say It' is an electro-styled single one-off of positive energy and hope in the time of call it whatever you want to call this bad yet serious apocalyptic movie we seem to be living in. BNCD is ready to release more material, incrementally as an international act, and is looking forward to performing online as well as in the flesh."

The lyrics goes like this: "I'll feel better/ When I really get her gaze/ The times whenever/ It seems like a forever daze/ I feel better/ When I really get her ways/ Have a sip/ A slip of no devotion/ Take a trip/ Down a line/ A no love potion/ Stay true blue/ It don't take any motion/ I don't have any notion when you'll/ Say it/ Say when/ Say it/ That you'll see me again." Δ