No Cal Poly player heard his name called during the 2013 NFL Draft, but tailback Deonte Williams only needed to wait briefly to find a team.

The Oakland Raiders offered Williams a rookie free agent deal within an hour of the end of the draft on April 27. Williams announced the tentative contract immediately on his Twitter account, and the Raiders later confirmed.

“My vision was to make it to the league,” Williams tweeted. “NOW my goal is to make it in the LEAGUE!!” 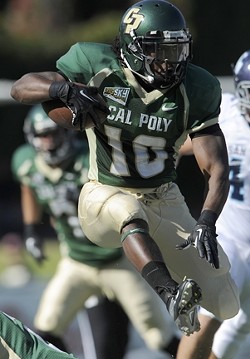 Williams rushed for 1,506 yards during his senior season with Cal Poly, his only year as the Mustangs’ starting tailback. He leaves a small but successful college program for a desperately struggling professional franchise. The Raiders aim to rebuild after a 4-12 season despite carrying a league-leading $46.3 million in dead money—contract tender owed to players no longer on the roster.

Teams aiming to rebuild often load up their training camps with undrafted rookie free agents in the hope that a few of them might provide low-cost solutions to roster problems. Therefore, Williams’ contract in no way assures the back a roster spot for the 2013-14 season.

The Raiders also drafted tailback Latavius Murray out of Central Florida in the sixth round and signed veteran free agent Rashad Jennings on April 11. Both project to back up Darren McFadden on the depth chart, and an NFL team rarely carries four tailbacks on its 53-man active roster. That said, McFadden has spent a good deal of time during his first five years in the league nursing injuries.

Several Cal Poly players have become draft selections in recent seasons. Cornerback Asa Jackson won a Super Bowl with Baltimore 10 months after the Ravens selected him in the fifth round of the 2012 draft.

According to the Cal Poly Athletic Department, the San Francisco 49ers asked graduating linebacker Kennith Jackson to participate in training camp as an unsigned invitee.