Purportedly inspired by true events, this ghost story suggests that Sarah Winchester (Helen Mirren), heir to the Winchester rifle empire, constructed the famed San Jose Winchester Mystery House while guided by vengeful spirits killed by Winchester rifles. Under risk of being forced out of her 51 percent share of the company for being of unsound mind, Sarah agrees to allow San Francisco psychiatrist Dr. Eric Price (Jason Clarke) to visit the house and assess her mental fitness. The film is co-rewritten and directed by Michael and Peter Spierig (Undead, Daybreakers, Predestination) from a script by Tom Vaughan. (99 min.) 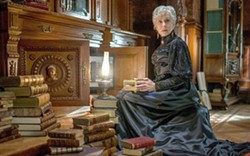 Glen When I see a film this mediocre starring someone as fantastic as Helen Mirren, my first thought is did she just need a paycheck or did this dreck look good in script form? The period piece tries for typical spooky atmospherics, jump scares, and creepy characters like the butler (Bruce Spence) and Sarah's grandson (Finn Scicluna-O'Prey), but it's not very scary, and the fictionalized elements of the story are pretty ridiculous. When we meet Dr. Price, he's three-deep in hookers and high on laudanum. He considers himself a fraud as a psychiatrist, but he's also skeptical of ghosts and believes himself to be wholly rational. When he's hired to assess Mrs. Winchester, he thinks the Winchester company lawyers have hired him, but he soon learns Mrs. Winchester herself chose him because of his own tragic past with his wife. The story unfolds slowly as Price witnesses strange things but believes they're triggered by his drug and alcohol use. The real-life Winchester House and Sarah's actual biography are interesting enough in themselves. This fantastical tale seems unnecessary, but if it had at least been genuinely scary, it might have been worthwhile. Instead we get a few cheap frights and a whole lot of hooey. If Sarah really believed she was cursed by the company her husband built, why not sell it and get out of the arms business?

Anna I've been fascinated by the Winchester Mystery House for a long time, and when I saw the trailer for this film, I let out a groan. Needless to say, I didn't have high hopes going into this film and it still managed to disappoint. With a 12 percent critic rating on Rotten Tomatoes and a generous 44 percent audience score, I'm clearly not the only one who found this movie to be an utter bore. I wasn't scared; frankly, not even the jump-scare moments roused me from the seat of my recliner. When Dr. Price pulled from his bottle of laudanum I thought, "Pass it on over this way, buddy. Let's get through this together." Alas, I was stuck soberly in that seat for 99 minutes, wondering what in the world drew a group of talented actors to this script. Like you said, the real-life character and story of Sarah and her house are interesting enough on their own, and while there may be veins of truth in how she was portrayed, in all likeliness the real person was far less obsessed with the ghosts haunting her. Mirren is showbiz royalty. Let's all just forget she was a part of this and lobby IMDB to take it off of her credits. 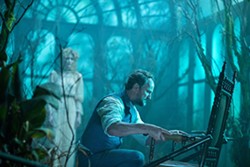 Glen I'm afraid the only people really excited about this film are those who run the Winchester attraction. The film was partially shot on location in San Jose, closing the city's main tourist attraction for several days and allowing about half a dozen of its staff members to make their film debut as extras. The house had already reported an increase in attendance before the film was even released, and hopefully this lackluster ghost story won't dissuade others from visiting. But I fear this film is as cursed as the writers would lead you to believe Sarah was. Yes, she lost her only child as an infant and her husband a short time after that, but she was also making $1,000 a day from her company, which was an enormous amount of money at the time. That's the kind of curse some people could get behind. When the film tied the 1906 San Francisco earthquake to the activities of Winchester's ghosts, the movie had sealed its fate as a total groaner. I'd love to see a real biopic of Sarah instead of this flappy piece of filmmaking. The acting is commendable and the house is fascinating, but save your money and take a trip up to San Jose to see the real thing live and in person. This forgettable and unnecessary film doesn't have a ghost of a chance being remembered.

Anna The house is purposefully shrouded in mystery—no photography is allowed on tours, and past owners have added even more oddities as it changed hands over time. Seeing some of those on the big screen is admittedly kind of cool, but I have to agree that seeing the house in real life is much more fascinating. When the 1906 earthquake hit and damaged much of the construction, Sarah simply boarded up that wing of the house and moved on to building elsewhere. I too am much more interested in seeing a biopic of her and her eccentricities than a silly ghost story that fails to frighten. Alas, that isn't what Winchester delivered, and this forgettable film does nothing but disappoint. Even the sometimes possessed, red headed kid Henry (Scicluna-O'Prey) can't pull off creepy, and none of the characters had me invested in their fates. While I'm sure the hype of the film hasn't hurt the tourist attraction, I'm guessing the tour guides know more fascinating actual history about it than the film portrays. There are even rooms that have always been closed to the public now open as part of the tour, so there's even more reason to see it for yourself or go again if you've been before. Save what you would spend on a movie ticket for some sweet tchotchkes from the gift shop. Δ