Wine and dine with wildlife

A fundraiser on May 30 will benefit Zoo to You 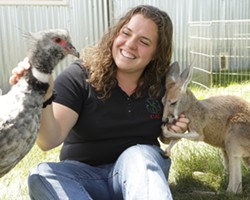 Animal lovers, don’t miss “A Wild Night in the Vines,” an opportunity to see, touch, and learn about exotic animals, which world-renowned zoologist Jack Hanna will host. The fundraising event to benefit Zoo to You, a facility and educational program devoted to conserving endangered animals, will be held at Sylvester Winery in Paso Robles, tucked among vines, a pond, and a 1947 Pullman train.

Zoo to You is rebuilding its home after a devastating fire last year. The electrical fire occurred in the middle of the night, claiming several animals including frogs, a tarantula, and a monkey.  David and Anita Jackson created the Zoo in 1990. The new building the Jacksons have planned will be constructed of hay bails and will be energy self-sufficient. Their goal is to complete the new facility by the second anniversary of the fire, pending funding.

Zoo to You will introduce the audience to a wide variety of amiable creatures during the fundraiser, prospectively including bearded dragons, tigers, bears, and zebras. Smaller animals will be walked through the crowd. The audience can pet some of the animals. Hanna will describe the creatures’ lives in the wild and present fabulous animal tricks. As director of the Columbus zoo, he transformed that facility into one of the best zoos in the country. He’s been a frequent guest on such television shows as Good Morning America and The Late Show with David Letterman, and hosts his own show, Jack Hanna’s Into the Wild.

The Jacksons have rescued more than 300 creatures in more than 20 years on the Central Coast, including all the current residents of Zoo to You. “People keep exotic animals thinking they’re cool, but can’t care for them,” Zoo manager Angela Boelk explained.  The Zoo acquired a tiger when police discovered it was used to guard a drug dealer’s house. The zoo has taken in wild animals who wandered the streets and injured, abused pets. One spider monkey was found in a dumpster, and the resident bald eagle was shot and blinded in Alaska. The newest resident is a five-week-old bobcat that was discovered in a barn being demolished in the middle of San Diego.

As the name suggests, Zoo to You travels, visiting schools, birthday parties, and community groups. Children learn by touching and observing the animals. “It’s a great way to bond with an animal,” Boelk said, “If you have a connection with an animal you are more likely to do something to make a difference.”

As their adjacent neighbor, Sylvester Winery is hosting the fundraiser. The event will take place in the winery's  outdoor amphitheatre. Chef Walter Filippini will present a gourmet meal.

Choose from three tiers of tickets for the show: a general admission ticket; a VIP ticket that includes wine and an autographed picture; and a Safari VIP ticket that buys an autographed book and entry to a private wine-and-cheese reception with Hanna. Tickets for children cost $10. For information and tickets call 227-4000 or visit sylvesterwinery.com.

In celebration of Mother’s Day, admission to The Exploration Station is free for moms at the Children’s Interactive Science Center.  Families can explore the new interactive exhibit about flight, along with permanent displays on the human body, weather, and electricity.  Visit explorationstation.org or call 473-1421 to learn more.

Meathead Mini Storage, a state-of-the-art storage facility with 24-hour security cameras and locked gates, opens on May 15. The facility offers a range of unit sizes for private and commercial purposes, including car and boat storage.  For more information visit meatheadministorage.com.

Mark your calendars for May 15: From 1 to 4 p.m. John Rau will teach his Just Once Guitar for Busy Adults to people who’ve always wanted to play the guitar but couldn’t find the time for lessons.  No need for prior knowledge about music to attend; just bring your acoustic guitar. A $29 materials fee provides a workbook and DVD.  Call the Atascadero Community Services Department at 461-5000 to register.

Café Roma at 1020 Railroad Avenue in San Luis Obispo will celebrate its 30th anniversary from noon until 9 p.m. on Monday, May 10. Enjoy the original menu and prices of 1980 when the restaurant opened. Call 541-6800 for reservations. ∆