Wine Country Theatre's staging of Over the River and Through the Woods shows through April 7 at the Park Ballroom in Paso Robles. Tickets range from $15 to $25. Visit winecountrytheatre.com for more information.

As Bon Jovi sings, "Who says you can't go home?" But sometimes you just need to get really, really far away from home. The tension between staying with and leaving family is beautifully portrayed in Wine Country Theatre's staging of Over the River and Through the Woods.

On March 22 at the Park Ballroom in Paso Robles, the theatre group opened its three-week run of the 1994 play by Joe DiPietro (playwright of the Tony Award-winning musical, Memphis). 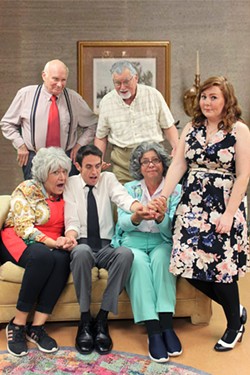 Right away we meet Nicky (Greg DeMartini, in his debut performance with Wine Country Theatre), a young, carefree single bachelor in New Jersey. Nicky spends nearly every Sunday afternoon visiting and dining with his two sets of grandparents, Aida (Dori Duke, seen in SLO Rep's A Funny Thing Happened on the Way to the Forum) and Frank (Bill Jackson, seen on Cheers and Seinfeld), and Emma (Cynthia Anthony, founder of Wine Country Theatre) and Nunzio (Tracy Mayfield, seen on stages in Paso and Cambria), who are super Italian.

The entirety of the show takes place in Aida and Frank's cozy living and dining room, with a seemingly endless amount of food coming from the kitchen. As Nicky tells the audience at the top of the show, "My grandparents firmly believe in the three F's of life—family, faith, and food."

The trouble starts one Thursday when Nicky makes an unscheduled visit to announce that his corporate employer offered him a huge promotion. The catch is the job is in Seattle, Washington, all the way across the country.

His grandparents are shocked and dedicate themselves to making Nicky stay. Without telling him, they invite a pretty, young Irish woman named Caitlin O'Hare (Haley Przybyla, seen in Wine Country Theatre's Gypsy) over for dinner in hopes that the pair will fall in love and Nicky will have a reason to stay. Chaos and shenanigans ensue.

DeMartini as Nicky is torn between home and heart as he tries to begin his own belated coming-of-age journey. Meanwhile, Jackson as Frank—who was put on a boat by his own father at age 13 to come to America—can't understand why his grandson would willingly leave, even though Nicky's parents have already retired to Florida, and his sister and her family have relocated to San Diego. "Tengo famiglia" or "I have a family," Frank says over and over again to Nicky.

Duke as Frank's wife, Aida, tries to instead use logic to get Nicky to stay. And Anthony as his other grandmother, Emma, initiates the setup with Caitlin and has near round-the-clock masses said for her grandson. And Mayfield as grandpa Nunzio internally battles with whether or not he should tell Nicky that he has cancer.

At the heart of Wine Country Theatre's Over the River and Through the Woods is the struggle of one generation, which worked so hard to give their kids everything they never had, to understand the struggles and dreams of the next—and vice versa. Δ

Arts Writer Ryah Cooley lives down the road from her parents. Contact her at rcooley@newtimesslo.com.