Despite a record year for grapes, San Luis Obispo County's agricultural industry tapered off in 2017 compared to 2016, declining 0.5 percent in gross value to $925 million, according to the county's annual crop report.

In 2016, crop values spiked $101 million, or 12 percent, over 2015. That upward trend didn't continue last year. Erratic weather and labor shortages challenged local farmers, according to the report and industry members who spoke to New Times. 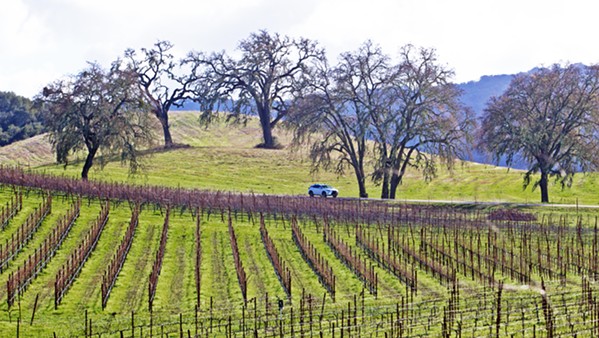 "It was a fairly flat year," SLO County Agricultural Commissioner Martin Settevendemie said. "In general, we've been hearing from the agricultural industry over time that labor is an issue. ... We did [also] have some substantial rains that inhibited some of the growers in planting, tending to, or even harvesting their crops."

Even so, wine grapes hit a second straight record-high year for value at $268 million—an increase of 10 percent over last year. Strawberries came in a close second at $228 million, a slight decline in value from 2016. Cattle numbers are back on an upward trajectory after the drought devastated herd levels, but they're still well below what they were historically. Meanwhile, vegetable production was down 20 percent, and nursery stock value hit a 10-year low of $83 million.

"We're producing well over 100 crops in the county," Settevendemie said. "When one is up, one is inevitably down, but they tend to balance each other out. ... One of the strengths we have is the diversity of agriculture."

Hiring field workers in a shrinking farm labor market proved to be a major challenge for growers—and impacted vegetables most. Broccoli and lettuce took the biggest dips in total acres harvested in 2017, as veggie growers simply couldn't find enough workers to pick all the ripened crops.

Todd Talley, co-owner of Talley Farms in Arroyo Grande, experienced the labor shortage and its consequences firsthand. The effects were amplified last year by unpredictable weather, which brought both rain and heat waves that altered ripening patterns.

"Especially when you have weather situations that bring on the product quicker, there were definitely times when we just didn't have the labor that we needed," Talley told New Times. "It continues to be a struggle today."

Field workers tend to gravitate to grapes and berries as higher value crops that offer higher wages, at times leaving vegetables with the short end of the stick. Talley said he's increasingly relying on the federal H-2A program to hire temporary foreign workers to meet the need.

"That's our reality," he said. "I suspect if you go to other growers in the area you'd hear the same story."

Even in the grape market, where labor is relatively easier to find and can be partially offset by mechanization, vintners are leaning more and more on the H-2A program as the local labor market dwindles.

"H-2A, in our minds, is the wave of the future," said Tavo Acosta, vineyard manager for Vino Farms, which grows grapes from San Miguel to Los Alamos. "It's my mindset that we've got to start heading in that direction to be able to be ready when labor does start becoming very short locally."

But H-2A regulations require that the farmer provide housing, transportation, and other accommodations to the workers. On the Central Coast, that can be a stumbling block, growers said.

"Housing has become a major obstacle and hurdle to get over," Acosta said. "Farmers in general are willing to accommodate and build housing for these people, but the bureaucracy and red tape does not allow for that."

Talley said the lack of H-2A housing is an issue the county and agricultural community needs to address for the long-term health of the industry.

"Our county is so dependent on agriculture. We need to fix the problem that we're in," he said. Δ