Wine in his blood 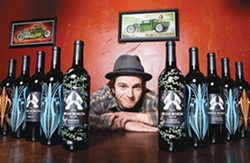 Paso Robles vintner Brian Benson made his first wine—a Cabernet—at age 12. As a kid, he would spend his days hanging out in his grandparents’ vineyard. Now, at 26, he heads his own winery, producing a variety of releases enjoyed by tasters and esteemed by critics.

When he started Brian Benson Cellars, he was following in the footsteps of his father, Norm Benson, who established Dark Star Cellars in 1995.

As Brian grew into adulthood, he decided to work under his father’s leadership. Joining his dad as an assistant winemaker, Brian received an education that led to his desire to make his own wine with its own personality.

“We have different powers,” Brian said. “I’m not afraid to try different things that he doesn’t want to try and do.”

Brian ultimately worked out a deal with Paso Robles growers to make his first commercial vintage, a Cabernet and a Zinfandel. But heartache came close behind that success when he lost two people close to him: his grandfather Allan Benjamin, and his friend Ryan Brockett. Both had influenced his life and his decision to start his own label. The image on every Brian Benson Cellar wine bottle features two praying angels—a tribute to friends lost.

“There’s no way that I would’ve been able to start a winery as young as I have without the help of my family and all of my friends,” Brian said.

In 2003, Benson released his premiere vintage under the new label. His first splash poured alongside his dad’s wines in the Dark Star tasting room. Brian Benson Cellars production soon outgrew its available space, and he was forced to find a new location for his operations.

Enter Denner Vineyard, with whom Brian made a Syrah and a Grenache, both of which were well recognized by leading U.S. wine critic Robert Parker, Jr. The 2005 Syrah scored a 90 and the 2005 Grenache scored an 85, both out of 100. Although Benson’s wines gained high praise early on, he doesn’t consider himself an expert in the industry.

“That’s one of the cool things about making wine ... it’s constantly changing and you never get to the point where you know it all,” he said.

Despite the split from Dark Star in 2003, Benson and his dad remain close. They do whatever they can to help each other, whether it’s exchanging ideas or teaching each other tricks they’ve learned.

Eventually, the two worked out a plan for Brian to return to Dark Star. He’ll get his own place on the property, and his dad plans to build a first- and second-year barrel room for Brian Benson Cellars.

Brian and his dad also both enjoy building their own cars. Brian expects to finish a car every year and get a pinstripe paint job to finalize the effort. He also plans to release a limited edition bottle of wine each year, pinstriped with the same design.

Brian Benson Cellars is located at 2985 Anderson Road in Paso Robles. To learn more about the winery, visit brianbensoncellars.com or call 296-9463.

Honor Earth Day by planting a tree in San Luis Obispo on April 25 during the SLO’s 26th annual Arbor Day celebration. Activities run from 10 a.m. to noon at Laguna Lake Park, including the planting of 15-gallon-sized trees. Dedicate a tree with a plaque commemorating a special person or event. Plant it yourself, or have it planted for you. Apply by calling 781-7220. Applications are due no later than April 10 to secure a tree and plaque. ...

Calling all Boy Scouts! The Los Padres Council of the Boy Scouts of America will hold its Tres Robles National Youth Leadership Training program June 22 through 27 at Camp Mabel French, 13 miles east of Arroyo Grande, near Lopez Lake. If you’re a first class-ranked scout interested in learning skills crucial to becoming a local leader and are at least 13—but not yet 18—“be prepared” to attend the orientation at 10 a.m. on June 20 at the L.D.S. Stake Center at 908 East Sierra Madre Drive in Santa Maria. Call the scoutmaster at 239-4408 or e-mail him at mrx@thegrid.net.

Send items for consideration to strokes@newtimesslo.com.