Wine not? Boozing it up at Paso Wine Fest

It’s only noon on Saturday, May 20, in Paso Robles, but the sun’s rays are already oppressively warm, clocking in at around 91 degrees as I drive around downtown, looking for a parking spot. I’m heading to the Paso Robles Wine Festival. Even though the downtown park and immediate surrounding streets are blocked off, it’s not too long before I find a spot that’s just walking distance away on Park Street near the Elks Lodge.

In spite of growing up in Paso, I’ve never been to Wine Fest. I wasn’t exactly swilling cabs in my younger days, and the past few years that I’ve been back in the area as a drinking adult, the festival has fallen under my radar. That all changes today. I link up with my friend and wine-guzzling buddy for the day, Zahara, and we walk the rest of the distance to the park together. 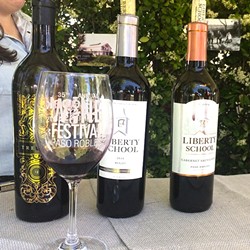 After a quick ID check at the gate, our hands are stamped, we’re handed commemorative glasses for tasting, and we’re in! Even though we’re walking in a good 20 minutes after the festival start time, the park isn’t too crowded, and more white tents than I can count dot the lawn with wineries from Paso and the rest of SLO County pouring their best bottles for eager wine connoisseurs.

Our game plan is to try and hit up the booths of wineries we haven’t been to before. First stop is August Ridge. The Creston-based winery is pouring Italian varieties not often seen in the area like nebbiolo and barbera. We leave happy. And while I’m usually one to scoff at pouring any wine into the dumping bucket, we’re in it for the long haul today, so I make good use of the silver buckets provided at every booth.

A few wine tastings later, we end up at the Hope Family Wines booth (which boasts the Liberty School, Treana, and Austin Hope brands). They’ve been a new favorite of mine ever since I recently tried the 2014 Treana red blend, a bold wine with intense flavors of currants, blackberry pie filling, anise, and dark chocolate. Yum! They’re also the kind of secret winery behind the Troublemaker Red blend you’ve seen at every grocery store and bar. After enjoying another taste of the Treana blend, we also partake of the cabernet and the cool, refreshing rosé. We may be at peak rosé craze, with every single winery rep asking, “Have you tried our rosé?” I’m not complaining as the rosé is helping me pretend that we’re not just weeks away from triple-digit heat waves in Paso.

The scent of tri-tip wafting in the air catches our attention and we walk over to a smattering of food booths. We assume we’ll need to fork over cash to eat, but nope! These mini portions are included with entry, oh happy day! We scarf down some delicious doughnut holes before moving on to mini tri-tip sandwiches from Old San Luis BBQ.

Next door is the Le Vigne Winery booth. The Paso winery is smartly serving up cheese pairings to go with each of their wine tastings and it’s all delicious. I could pretend to remember which cheese was paired with what wine, but at this point in the afternoon I’m drinking like it’s my job (with lots of trips to the water tent, OK mom).

We make stops at several more wineries before landing at our last stop—the Tin City-based Field Recordings—for a taste of something a little different to round out the day. We’re here to hit the chambong. Their fizzy and light Foxie 30 is on tap and being served up in Champagne/bong flute hybrids. It’s all the classiness of Champagne with all the bro-sensibility of a beer bong, which feels like a metaphor for Paso itself. Sipping is discouraged and the Foxie 30 goes down easy.

Arts Editor Ryah Cooley is stocking up on local wine at rcooley@newtimesslo.com.