Wine, Waves, and Beyond hits Pismo May 4-6

Learn more about Wine, Waves, and Beyond
and view a schedule of daily events at
winewavesandbeyond.com.

Like seagulls scanning the sand for tasty worms and mollusks, the surfers flock to the coast.

The sun is barely up, each crashing wave delivering a salty chill that lingers in the air. This is what feeds a surfer: the dream of a perfect set, a morning full of beautiful barrels (or at least one good ride). But before they peel off denim and flannel for the security of neoprene skin, they'll need to be well fed.

In other words: a surfer's gotta eat. 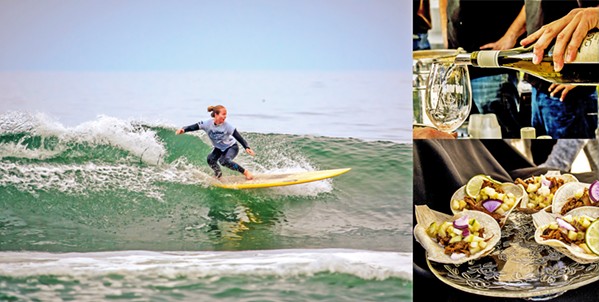 Allshouse will be on the beach at 7 a.m. sharp this Saturday, May 5 (coffee in hand), as part of Wine, Waves, and Beyond's annual 805 Surf Classic Contest, which has become a local tradition.

Aside from tasty waves, the three-day event will provide set after set of wine, beer, food, VW buses, and classic California surf culture.

Of course, this isn't just any food fest or surf contest. For one, winemakers and brewers have always been part of this bag.

"Winemakers have been winning the surf contest more often so far, but there is a huge caveat because there are so many more new brewers coming up all the time," Allshouse said.

It's true. Taste for yourself at the Barrel to Barrel event, slated for Sunday, May 6, on the oceanfront lawn at the Cliffs Resort in Pismo Beach. Gathered under sunny skies and circling seagulls looking for a scrap, expect more than 40 craft breweries and area wineries. And to gnaw on?

As it turns out, surfers like to eat a whole lot after they get out of the water. Splash Cafe, Cracked Crab, Apple Farm, Gardens of Avila, Cool Cat Cafe, Marisol at the Cliffs, and Vivant Fine Cheese will all be on hand for maximum munchies.

Chef Steven Smeets of Apple Farm in SLO said he's hoping to bring grandma and granddaughter together with new-school comfort cravings. Expect a giant roast served with horseradish, plus chicken and biscuits.

"This event is known for giving out substantial portions," Smeets said, adding that the Apple Farm's pastry chef has created a "faux-stess" Ding Dong on steroids inspired by those old-school Hostess treats you love to love.

Word on the street: Cliffs Pastry Chef Jeniece Grimshaw is making her own slant on the classic Twinkie, complete with vanilla cream innards.

"Comfort food transcends generations, whether you're a young buck or an old surfer," Smeets added.

Speaking of old surfers, they'll be plenty of 'em at the annual Surf Movie Night at the Fremont Theater in downtown SLO. Nervous Laughter will show Friday, May 4, with proceeds going directly to StillFrothy, a nonprofit that organizes beach cleanups, supports wounded warriors and AMP Surf, and encourages youth to get off their butts and onto boards.

After all, all those future "old surfers" have to start young.

Local nonprofit GleanSLO will again receive all the funds from the Barrel to Barrel food, wine, and beer event. Roxanne Sanders is GleanSLO's Program Manager and one of the group's only full-time staff (wink, wink: she could use a hand, if you're not against rolling up those sleeves). Together with her band of volunteers, unwanted produce is gleaned, cleaned, and given back to the community.

Volunteers pick across the region in backyards and farms, but few probably know that citrus is often culled from Pismo Beach, and berries grow mere miles away from the ocean.

"One of our most popular picks is raspberries and blackberries August through November at Talley Farms in Arroyo Grande, " Sanders added. "When you're sitting on the beach, you wouldn't necessarily think about how berries grow well here, thanks to the coastal influence."

Longtime Wine, Waves, and Beyond board member, Chronic Cellars co-owner, and surfer Josh Beckett said it's hard to keep a food and wine event fresh in a county that consistently churns out more and more festivals.

The success of Wine, Waves, and Beyond, then, is probably due to the fact that organizers have kept paddling. Surfing would be no fun without occasionally going toes on the nose, coming off the lip, or even wiping out.

"We're also fortunate to have GleanSLO as our beneficiary, to have an unreal setting, and the fact that we bring the whole Central Coast together," Beckett said.

As an old surfer once said: Give them wine, and they might come.

But give them wine, waves, and maybe some killer roast beef, and the 805ers will roll out en mass, VW vans blazing.

"It all goes hand in hand," Beckett said. "So many of us who live here do it all: It's the surf, the beer, the food, and wine."

Hayley Thomas Cain cannot surf, but she can sort of boogie board while eating a taco. She can be reached at hthomas@newtimesslo.com.