You have to really hit rock bottom before you can climb your way out of the darkness. Darren Delmore’s “rock bottom” is not hard to pinpoint. It’s all there in black and white.

It was in the early 2000s. He had just gotten sacked from his low-paying job as a cellar hand at Bonny Doon Vineyard near Santa Cruz, a hostile work environment where, at its worst, he felt the need to carry around a mallet for self-defense purposes. The drama had come to a head during a screaming match where Delmore realized that, when provoked far enough, he could spew out “hardcore street Spanish” with frightening ease. 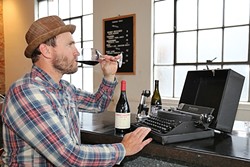 He had taken that particular job in an act of desperation—with the hope that it would propel him far from a passionless life he had been leading in SLO where he poured (and drank too much) wine. His first marriage had hit the skids for the final time. It was over; she was seeing another guy. A strange, vile illness—one that caused Delmore to barf up fiery, neon green bile every night—had taken hold of his very soul. His hairline was receding. He was entering his 30s with nothing to show for it, save for some bylines in surf, beer, and wine magazines. Did I mention there were also a lot of sting-happy bees hanging around the vineyards where he slaved and sweated for $8 an hour?

“I found myself sobbing and descending a wooded ridge in Humboldt County with my life and a three gallon carboy of syrah going through malolactic fermentation packed into the backseat of my purple Geo Prizm,” Delmore writes in his no-bullshit memoir, Slave to the Vine: Confessions of a Vagabond Cellarhand. “I really did consider flooring it off the slope.”

Stoned and alone, Delmore hung on to one glimmer of hope shining through the chaos. He had stumbled upon a job opening at Hirsch Vineyards, arguably one of the most famous pinot noir producers in the world (bottles go for anywhere from $80 to $180 a pop). By a stroke of luck, he had landed a live-in job at the remote winery, a character in and of itself. This is where the meat of the book lives: in this strange, beautiful, twisted, secluded, surreal patch of wilderness tucked away on Sonoma County’s ragged coastline. Of course, the days weren’t quite as picturesque as the landscape. There was blood, sweat, and carnage. There were egos to contend with, weed, wild women, and a whole lot of self-discovery.

“Harvest ends up being a blur. It’s really three or so really intense weeks, but when you’re in the midst of it, it feels like forever. You think you might quit, break down,” Delmore said. “I had this idea in my head that I was a quitter. A quitter in relationships and in life. I knew that, no matter what, I was going to see it through.”

During that first brutal harvest at Hirsch, Delmore lost a total of 20 pounds, contended with yellow jackets, dealt with his illness, and found his way through to the other side of sanity. Although not recounted in the book, Delmore did end up returning to work a second harvest at the famed vineyard—the year that smoke taint from wildfires destroyed most of the region’s crops.

“It was a horrible year. That would have been a better book, actually,” Delmore said with a chuckle. “This book took me nine years to write. The whole thing is pretty much a diary. For a personal story, I’m really glad I journaled. If I hadn’t, there would be no dialogue. Who knows what I would have remembered.”

Delmore didn’t journal because he knew he was going to one day write a tell-all memoir full of characters he’d have to rename to protect their identities. Back then, he was just trying to avoid cabin fever. He had never lived that far into the sticks before. There was no cell reception, no T.V., no Internet.

“During the harvest, you’d get one afternoon off, and you’d go into town with coolers and blue ice packs and you’d shop for two weeks,” Delmore said. “You wouldn’t want to miss anything because you’d be back up on that ridge, 45 minutes from town on a road full of switchbacks.”

Although it sounds kind of miserable (and it was at times), the experience was just what the author needed to soothe his broken heart and build up his confidence. He had to get away; change his life; take on a project larger than his angst. Now, Delmore happily lives with his wife and two young children in Templeton, where he works sales for Tablas Creek winery. His days of working grueling harvests in Australia, Oregon, and northern California are over. Still, the author finds the time to pick, crush, and punch-down. He’s always been a slave to a little pain.

“I make a barrel of it for myself and I don’t sell it; it keeps my hand in doing winemaking because I’d miss it,” Delmore said.

I, for one, am glad Delmore continues to make wine. He’s good at it. I’m also glad he didn’t go out Thelma and Louise style on that crazy day in the Humboldt hills. Not only has this ballsy author lived to tell the tale, but he’s proven anyone can grow in the face of adversity—and maybe even because of adversity.

“That’s one of the inspirational points this book has: If you can do it, if you aren’t completely strapped down, and you find yourself in a situation where you’re not completely happy or moving ahead in your life, you can follow your passion and do something life-changing,” Delmore said.

Just like the yellow jacket featured on the novel’s cover, sometimes what you need is a sting—a wake-up call—to get on with and truly live your life. We’re all a slave to something, right? Delmore encourages us all to follow our pain, follow our passion. Who knows. It might just lead to an unforgettable vintage.

Hayley Thomas is too soft and doughy to work harvest, but she likes to read about all the hard work and effort. She can be reached at hthomas@newtimesslo.com.