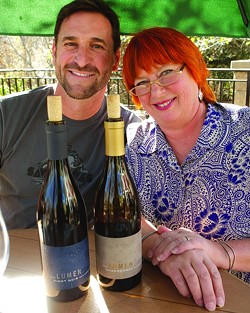 It was quite intriguing to read about a new Santa Maria-based wine company named Lumen before I had an opportunity to taste its new releases of chardonnay and pinot noir. The charming newsletters were informative and appealing, clearly written by an individual who was not only passionate about wine, he had to be a professional journalist. William “Will” Warner Henry recently covered the topic of Lane Tanner’s impressive ability to make wines that age beautifully:

“When I asked Lane why she likes to pick (winegrapes) earlier than everyone else, she said, ‘Because it makes the wine taste more alive.’ After tasting one of her wines that had more than 25 years of age, I was convinced. Not only was the wine still tasting young, it had developed layers of complexity that were not present in some of her younger wines.”

I would have added, not yet but they will gain complexity with age. Admittedly, the main reason Lumen attracted my attention was because my friend Lane Tanner is the winemaker and co-partner.

Tanner is now in a partnership with Henry who has been around the wine industry throughout his life. He explained his father, Warner Henry, was such a passionate collector he filled every closet in their home with fine bottles of wine. That collection motivated Warner to create the Henry Wine Group (HWG), a prestigious distributer/importer of fine wines from California and Europe. I attended many of their trade tastings when I lived in San Francisco because HWG represented so many renowned brands from around the world.

“My dad tried to educate me about wine. But my first eye-opening experience happened when I traveled to France with my parents when I was 21. They served me a Burgundy that knocked me backward, and ever since then I’ve loved pinot noir for its versatility.” At that point Lane quipped: “I drink it for the health benefits.”

Although I had never met the younger Henry before, he worked in and out of the family business throughout his early adult life. With HWG, Henry worked in marketing and sales. But the future vintner did spend some hands-on-time learning to make wine in Australia at Leeuwin Estate winery right after graduating from high school. When he returned home he became a sales rep for HWG. “I left the business to attend school for photography and became a journalist,” Henry recalled. “After that I founded the non-profit group, Save the Waves Coalition, and traveled around the world promoting conservation.”

Will explained his latest venture, to produce great wines: “When I started the project of building a brand of my own I was looking for fruit that was true to the varietal.” Fortuitously, Henry met Tanner at Sierra Madre Vineyard where she was making their wines until the vineyard owner decided to get out of the winemaking side of the biz.

“Will came to the vineyard to buy wines, and I kind of came with them,” she smiled.

He and Tanner hit it off and soon afterward formed a partnership. Thanks to his Australia experience, he was able to start working with Tanner during the 2013 harvest. She explained: “I’m the winemaker and he’s the pro in sales, but there’s a loose connotation of what our jobs are.” You can view photos and can sign up for the newsletters by visiting their website at lumenwines.com, where you can read more details about this new brand.

My friendship with Tanner goes back nearly two decades. In 1996, she was the first woman winemaker I interviewed after relocating to the Central Coast. There were few women titled “winemaker” then but Tanner was already an icon, she earned such respect. In her first years, she only made pinot noir. In 1998 after El Niño storms ravaged many vineyards in Santa Maria and Santa Ynez valleys, it caused a severe shortage in winegrapes, Tanner had to add another variety, syrah, which helped her brand survive tough times. To my incredible surprise, in 2011, I wrote about her retirement from winemaking. She was way too young for Medicare but I had a premonition she would return to winemaking, should conditions be ideal. All I can say now is, it’s fortunate, that didn’t last long. Lane Tanner’s back and practicing her magic in producing outstanding wines that can age for decades.

You might ask how I can make such a bold prediction. Like Henry, I know her style, and I’ve tasted many of her wines that were aged more than two decades. Every one of them has been a revelation, showing just how age-worthy our Central Coast wines can be in the hands of an experienced and highly talented winemaker. It was only last week when I met Tanner and her new partner Henry for lunch at Woodstock Marketplace. It wasn’t surprising to learn Henry’s passion for wine is equal to Lane’s. It’s a tale of bright stars who crossed paths and connected.

They will continue to buy chardonnay and pinot from Sierra Madre Vineyard, but the dynamic duo plan to grow the brand by adding those varieties grown in other renowned vineyards. Tanner’s enjoying making more varietals.

“Working with grenache is real fun, and we’re planning to make a pink wine and add grenache blanc.” Even with additional varietals, they plan to keep the brand within the few-thousand-case size. “Once you’ve gotten up to 5,000 cases, you’ve got to hire help,” Lane finished, to which Will added: “We’ll keep it small and always keep it a value-focused brand.”