Shumrick, the founder of Tobin James Cellars, is pleading not guilty to three charges: felony shooting at an occupied vehicle, misdemeanor vandalism, and misdemeanor hit-and-run. 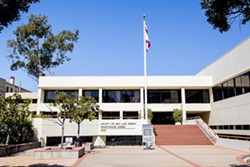 According to the SLO County Sheriff's Office, on Oct. 2, 41-year-old Gabriel Canaday was driving his golf cart on the winery property on Union Road when Shumrick—"attempting to disable the golf cart"—shot out its tires with a shotgun. Shumrick then caused intentional damage to Canaday's truck, the criminal complaint states. No one was injured in the incidents.

SLO sheriff's deputies were called to the property the next day, Oct. 3, and they arrested Shumrick after he reportedly admitted to the shooting.

"Deputies interviewed Shumrick, who claimed the victim [had] been trespassing numerous times on his winery property, resulting in numerous calls for service from the Sheriff's Office over the past few months," Sheriff's spokesperson Tony Cipolla told New Times via email.

Jere Sullivan, an attorney for Tobin James Cellars, told New Times that the 62-year-old Shumrick's actions were necessary and justified by self-defense.

He said that over a "frightening" period of several months, Canaday repeatedly trespassed on the winery property and harassed and intimidated its employees and patrons.

"The winery was the victim," Sullivan contended.

SLO County law enforcement and court records show an extensive recent history between the 27-year-old winery and Canaday. Over a two-year period, the Sheriff's Office received 43 calls for service to the two properties, which face one another across Union Road. The calls grew so routine that deputies started conducting "extra patrols" to the winery.

According to Tobin James Cellars, Canaday's trespassing became a near daily occurrence in mid-2019 with his visits growing increasingly erratic and threatening. He scared employees—at times blocking them from leaving the parking lot with his car—made vague threats, fired weapons from his property, trespassed at night, and accused the winery of hiding members of his family.

"Everybody was terrified of this man," Sullivan said. "There were employees who threatened to quit [and] employees who actually quit over this."

Since April 2019, Canaday has also been arrested 18 times, according to the Sheriff's Office, mostly on warrants for violating restraining orders and failing to appear in court. He is accused of harassing his ex-wife and threatening to kill a local man.

In late October—after the shooting and Shumrick's arrest—Tobin James Cellars filed for its own restraining order against Canaday to protect its 66 employees. The order was granted in court, but like the others, Canaday also allegedly violated it by texting winery staffers and continuing to trespass.

On Nov. 15, a sheriff's deputy attempted to arrest Canaday at a traffic stop, but he fled down Highway 46 in his vehicle. After a chase, Canaday returned to his Union Road residence where he was finally apprehended with the help of a CHP helicopter.

In the wake of his arrest, Canaday was denied bail, and he underwent psychiatric evaluation. He was found to be competent for trial, and pleaded no contest to resisting arrest and evading an officer. On Jan. 28, a SLO County judge sentenced him to five months in county jail.

With Shumrick now facing the possibility of jail time for shooting at Canaday's golf cart, Sullivan said he wished law enforcement had been "more proactive" as the neighbor-to-neighbor conflict escalated.

"There was no way of telling if this was going to be the time of crossing the line of committing violence," Sullivan said. "You could see the potential was there."

Sullivan said he's confident of Shumrick's innocence, as he said it constituted a "defense of property, defense of staff, and defense of clients."