When given a chance, San Luis Obispo County 5th District Supervisor Debbie Arnold is eager to talk about the flaws she sees in the county ordinance governing water use in the Paso Robles Groundwater Basin.

Arnold finds it inherently unfair. In 2013, amid drought and dried-up wells, the Board of Supervisors essentially banned any new or expanded groundwater use over the aquifer that could not be offset by a reduction in pumping.

Striving for water neutrality, the county hoped the policy could help stabilize an overpumped basin that supports 40 percent of SLO County's agricultural economy and thousands of rural residents.

But more than seven years later, Arnold laments how the ordinance created winners and losers. Those agriculturalists who'd been pumping the most water in 2013 were allowed to continue that use at that level. But those who'd scaled back due to the drought, or would like to start a modest farm right now, are often out of luck.

"Some property owners have unrestricted use of water. Others have nothing," Arnold said at a Jan. 26 board meeting. "I'd like to see a new ordinance."

Arnold's complaints have finally sparked a major shift in Paso water policy at the county. And not all stakeholders are happy about it.

The Board of Supervisors voted 3-2 on Jan. 26 to direct county staff to develop a new ordinance to replace the current one. The most significant potential change: a five-fold increase in the minimum amount of groundwater that basin property owners may use without restrictions—from 5 acre-feet per year (AFY) up to 25 AFY.

To Arnold and others, the higher allowance would help remedy the injustices placed on smaller farmers with the 2013 ordinance, giving them more freedom and flexibility with their land. But to other basin stakeholders, the change would all but guarantee an increase in overall groundwater pumping from the basin, exacerbating its decline. According to the Paso basin sustainability plan, the aquifer is currently 13,700 AFY in overdraft.

"Depending on how many people avail themselves of that exception, that potentially creates more water use, which creates a bigger problem," said Matt Turrentine, manager of investment vineyards near Shandon and a board member on the Paso Basin Cooperative Committee. "Twenty-five AF is approximately a 17-acre vineyard. It's not landscaping, but it's not gigantic. There are lots of wineries that have vineyards that size or smaller."

North County water officials on the cooperative committee—including Turrentine, who represents the Shandon-San Juan Water District, as well as Arnold, John Hamon of the Paso Robles City Council, and Kelly Dodds of the San Miguel Community Services District—are mandated under state law to bring the basin back into sustainability by 2040. A sustainability plan is still under review by the California Department of Water Resources.

On Jan. 27, the committee discussed the county's new direction, with Arnold explaining how she could no longer accept the shutting out of so many property owners under the current ordinance. 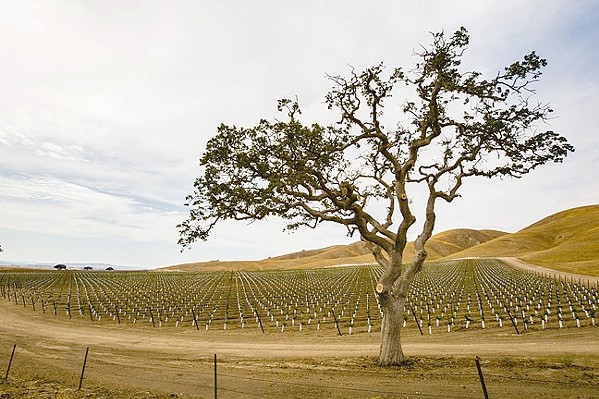 "If it were not for increased pumping by these [large agricultural] entities over the past 10 years, the basin would not be in the level of crisis that it is," Wilson said in comments to the Board of Supervisors on Jan. 26. "Fair and equitable management practices should allow farmers who historically irrigated to continue."

"This keeps the current system in place, which is familiar to both county staff and farmers, continues to offer water savings via fallowing and offsets, and, hopefully, would see us through to the implementation of the groundwater sustainability plan," read a Jan. 22 letter from the Paso Robles Wine Country Alliance.

What the county will ultimately adopt, though, remains uncertain. Under the new directive, county staff must now prepare an environmental impact report (EIR) for the new ordinance and bring it back to the board before the current one expires on Jan. 1, 2022.

Officials do not want to see any lapse in regulation.

"It needs to go fast," Arnold said. "It's a pretty aggressive timeline, but we're going to try to make it by the end of the year."

The EIR, estimated to cost $650,000, isn't just a formality, officials said. In addition to allowing 25 AFY of exempted water use, the new ordinance would also offer a six-year "lookback" for landowners who historically farmed but stopped, and give hopeful agriculturalists an opportunity to apply for land-use permits to plant new farms.

Dissenting Supervisors Bruce Gibson and Dawn Ortiz-Legg, of the 2nd and 3rd Districts respectively, criticized the new ordinance as a poor use of county resources with potentially dangerous impacts to basin sustainability.