It's all talk and no walk for this surfing-challenged writer

Because I'm lean, blondish, and look and act like a California kid, I often get asked: "Do you surf?"

My answer has always been, "yes!"

"Yes, I love to surf," I eagerly tell people. "In fact, I have an uncle and cousin who live on Oahu and I surfed Waimea Bay. And did you know that my other cousin is on the surf team at Newport Harbor High?"

I go on and on. But here's the truth: While I do have an uncle with a house on the North Shore, I only visited his family once when I was 13. I borrowed my cousin's board and paddled into baby waves at Sunset Beach. I was terrified the whole time of hitting the coral reef underneath. 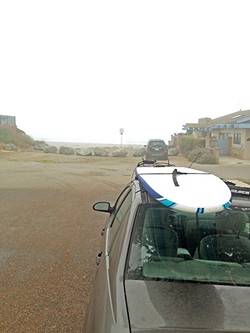 But I had a blast out there. The whole romance of the union between man, board, and nature stole my heart. And the amazing feeling of riding these bursts of natural energy was indescribable. Upon our return to the Bay Area, I asked my mom for a short board for Christmas.

Over a five-year period, I took that thing out four times in Santa Cruz. I just didn't feel like working hard to get good at surfing, and I was also scared of big surf. My mom finally decided to sell it when I turned 18.

Does that track record make me a surfer? Absolutely not. But I enjoyed the narrative. And I love the idea of being a surfer.

When I moved to San Luis Obispo, this fantasy continued. I was excited about living so close to the coast. I ran to Costco and bought a Wave Storm board. But since I moved, I've basically avoided paddling into SLO County waters out of fear of what will happen. Can I even catch a wave anymore? Or stand up? Very quickly, my "oh yeah, I'm a surfer" story was falling apart, even in my own mind.

Hoping to salvage this situation, I made a pact to finally go surfing. Early in the morning on Monday, July 25, before work, I tied my overpriced board straps atop my car, threw the Wave Storm on, and drove to the Cayucos Pier.

The weather was foggy and the surf was small"but I didn't care. I paddled out south of the pier and sat on my board, all alone except for the hundreds of pelicans floating around me. I've never hung out with so many pelicans. And every so often, one made an epic dive into the glassy water for breakfast. Adding to the fun, a seal popped up right in front of me and gave me the territorial eyeball.

My attempts to catch waves were, um, lame. I kept getting my right foot tangled in the leash (I ride goofy). I'm in bad shape and couldn't pop up on my board quick enough, which led to either nosedive wipeouts or short-lived rides on whitewater. I ended up spending most of my 40-minute session sitting on the board, admiring the wildlife.

I realized on this trip that it's not really surfing I love, but being in the ocean. It's silly, but my favorite part of the experience was wiping out. Being forced underwater, tossing and turning in the waves, and then coming back to the surface is like a lesson in enjoying the chaos of the universe. For some reason, that's easier for me to do in the ocean.

My new answer to the question, "Do you surf?" is "no." I am an admirer of surfers who have the balls, skills, and fitness to catch real waves"like my uncles and my cousins.

And while I should probably just sell my board at this point, knowing me, I'll be paddling out in another few weeks, wiping out like a kook.

Staff Writer Peter Johnson wants you to send him surfing tips at pjohnson@newtimesslo.com.