Have you ever wondered what the secret to living past age 100 is? So has 102-year-old Mary Goins.

“People say, ‘What’s your mystery; what’s your secret?’” she said. “And my only answer is it’s a secret. I don’t know. If there’s a secret, I sure don’t know it, and I certainly didn’t expect it.”

Goins, who has been living at the Las Brisas Retirement Community in SLO for a little more than a year, turned 102 on Oct. 1. She spent that day with her daughter, a resident of Arroyo Grande, and then was thrown a surprise second celebration by Las Brisas on Oct. 4.

“Heavens no!” Goins said when asked whether or not she anticipated the Las Brisas event. “I [already] had my birthday and my party, I thought.” 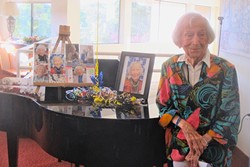 Las Brisas residents were gathered in the dining area on the big day. The room was decorated with white banners that read “Happy 102nd Birthday,” and several pictures of Goins were placed on top of a piano. Two men sang and played guitar while the partygoers followed along with pamphlets labeled “Songs of the ’40s and ’50s.” Goins sat in the front row, (despite replying “I’d rather not!” when a Las Brisas employee asked her if she’d like to sit there), and laughed with skeptical amusement when one of the players dedicated the song “Hey Good Lookin’” to her.

Despite the joking tone with which the dedication was delivered, Goins does genuinely look good for her age. She doesn’t wear hearing aids or even glasses, and although she has a walker, she is capable of getting around fine without it and treats it more like a purse than a mobility device.

During our interview, Goins talked at length about her children and grandchildren, including a granddaughter who recently finished her doctorate, is about to publish a book, and previously traveled with Barnum & Bailey circus for a while. Goins said that she’s proud of her family, and that seeing all their accomplishments is the best thing about living for so long.

“I’ve been able to see my children come through some wonderful things,” she said, getting a bit teary-eyed. “Unfortunately I lost one just recently. … But I keep waking up. … I have many people whom I love, and just thinking about them gives me a reason to wake up again.”

Though she doesn’t consider herself athletic, Goins has several hobbies such as golf and bocce ball, and tries to exercise regularly. She also plays bridge and describes herself as “strictly politically inclined.” She said that it hasn’t been long enough since she moved from the Bay Area to the Central Coast to be able to get into local politics much, but she enjoys reading about national politics.

“I have these wonderful people here as friends and I’m just so grateful to be alive,” Goins said. “But I also feel that I’m ready to leave any time.”

The SLO International Film Festival is continuing its Fall Shorts events, with two fundraising movie evenings featuring short films, speakers, food, wine, and music. David Wilson of Grape Encounters Radio will host Eat My Shorts on Oct. 19. Starting at 6 p.m., the third presidential debate will be live-streamed at the Fremont Theatre in downtown SLO. Following the debate will be animated, fictional, and documentary shorts that all have food in common. Tickets are $25 per person and are on sale at slofilmfest.org.