With 30 bands to choose from, this week is one for the record book

A week this packed feels like the good old days when every Thursday we'd have to take inventory of the options and make some hard choices about which shows we were going to see and which we'd have to pass on. I'm going to break it down venue by venue, and you're going to have to decide how far your time and money will take you.

Los Ángeles Azules kick of Vina Robles' week on Friday, Oct. 8 (8 p.m.; all ages; $50 to $70 plus service charges at vinaroblesamphitheatre.com). After a year without a concert, the recently named Premio Lo Nuestro—Cumbia Legacy Award-winning ensemble has embarked on their 40 Años Tour, which will take them to 25 venues, including Paso. Expect classics such as "Cómo Te Voy a Olvidar" and "El Listón de tu Pelo," as well as music from their 40-year career.

Multi-platinum Danish band Volbeat plays Vina on Saturday, Oct. 9 (8 p.m.; all ages; $49.50 to $69.50 plus service charges at vinaroblesamphitheatre.com). They're on their Wait A Minute ... Let's Tour tour to promote their new video for "Wait A Minute My Girl," a bopping post-punk pop track that will get you hopping.

Legendary punk outfits Flogging Molly and Violent Femmes share the bill at Vina on Sunday, Oct. 10 (6:30 p.m.; all ages; $45 to $65 plus service charges at vinaroblesamphitheatre.com), with Me First and The Gimme Gimmes and Thick opening. Yeah, four bands for your moshing pleasure. The Femmes, a personal fav in the '80s, are celebrating their 40th anniversary, and you'll hopefully hear classics such as "Blister in the Sun," "American Music," and "Gone Daddy Gone." 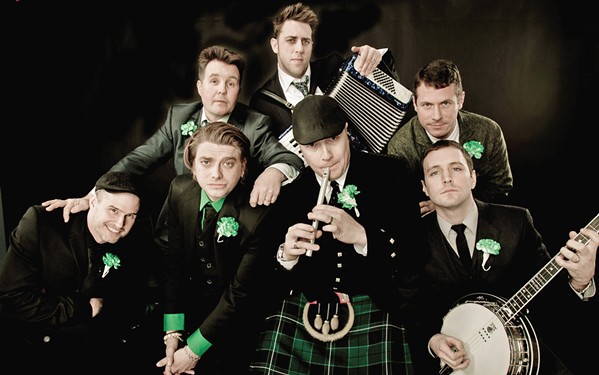 More punk awaits when Celtic-American heroes Dropkick Murphys and Berkeley-based Rancid play Vina on Wednesday, Oct. 13 (7 p.m.; all ages; $45 to $50 plus service charges at vinaroblesamphitheatre.com), with The Bronx opening. This is the first time since 2017 that The Murphs and Rancid have hit the road together.

Finally, rock acts Dirty Heads and Sublime with Rome play Vina on Thursday, Oct. 14 and Friday, Oct. 15 (7 p.m.; all ages; $49.50 to $75 plus service charges at vinaroblesamphitheatre.com), with Hirie opening. They're calling it their High and Mighty Tour. Sublime With Rome is promoting their 2019 album Blessings and its singles "Wicked Heart" and "Light On." Like Sublime, Dirty Heads mixes hip-hop, reggae, and rock, all delivered with their laid back Cali attitude.

The Fremont kicks off their week with reggae, ska, surf, pop, and punk acts The Expendables and Ballyhoo! this Thursday, Oct. 7 (8 p.m.; $18 plus fees at seetickets.us). I almost can't believe The Expendables have been at it for 18 years. I still think of the Santa Cruz band as newcomers, but they're veterans now. 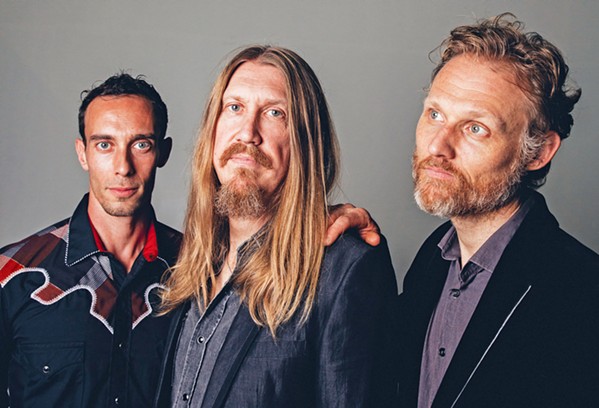 Stripped-down Americana roots heroes The Wood Brothers play the Fremont on Thursday, Oct. 14 (9 p.m.; $25 plus fees at seetickets.us), with Kat Wright opening. They write beautiful, literate, often melancholy songs, and their most recent, Kingdom In My Mind, is amazing.

"Everyone has these little kingdoms in their minds," Chris Wood said in press materials, "and the songs on this album all explore the ways we find peace in them. They look at how we deal with our dreams and our regrets and our fears and our loves. They look at the stories we tell ourselves and the ways we balance the darkness and the light." 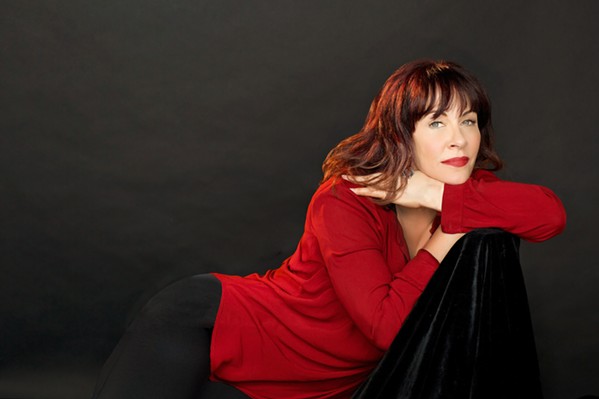 Grammy-nominated performer Janiva Magness is next up at The Siren on Wednesday, Oct. 13 (7 p.m.; 21-and-older; $22 presale at eventbrite.com or $25 at the door). She's touring in support of Change in the Weather: Janiva Magness Sings John Fogerty, which came out last month on Blue Élan Records and reframes 12 songs "curated from the Creedence Clearwater Revival leader's catalog in Magness' soaring, soul-centered style," press materials explain. Expect to hear "Lodi," "Bad Moon Rising," "Don't You Wish It Was True," and others.

"Kirk Pasich, the founder of Blue Élan, suggested that we record 'Long As I Can See the Light,'" Magness explained, "and I loved adapting and singing that song, so it was a natural evolution to Change in the Weather. John Fogerty is a brilliant writer. His melodies are big and rich and provide a real highway into the heart of his songs, which is wonderful for me as a singer, and their backbone is his storytelling, which is spare and direct, and absolutely American in its imagery and themes. And those themes endure."

Numbskull and Good Medicine close their week with super fun pop punk act The Queers at The Siren next Thursday, Oct. 14 (7 p.m.; 21-and-older; $10 presale at eventbrite.com or $12 at the door), with local act Pancho and Wizards opening. Expect Queers classics such as "Can't Stop Farting," "Born To Do Dishes," and "I Didn't Get Invited To The Prom." If you dig the Ramones, you'll dig The Queers.

Indie folk pop act Whitney plays the Rock on Monday, Oct. 11 (7 p.m.; all ages; $35 plus service fees at ticketweb.com), with Renée Reed opening. Whitney formed in a Chicago apartment in 2014, "tackling songs by the Everly Brothers, Allen Toussaint, and more played," according to their bio. In 2016, they began releasing their own material but continued to offer select covers like NRBQ's "Magnet" and Neil Young's "On the Way Home."

(((folkYEAH!)))) and SLO Brew Live present the Cass McCombs Band on Thursday, Oct. 14 (7 p.m.; all ages; $25 plus service fees at ticketweb.com). This psychedelic folk-rock songwriter's material has been described as diverse, cryptic, vital, and refreshingly rebellious. According to his press materials, "'Rancid Girl' reads like a ZZ Top study in Kardashian politics, 'Run Sister Run' [is] a mantra for a misogynistic justice system, [and] 'Bum Bum Bum' displays a racist, elitist government through the allegory of sadistic dog breeding."

Clark Center for the Performing Arts

Arroyo Grande's favorite auditorium is back in action next Thursday, Oct. 14, when Led Zeppelin tribute act Led Zepagain plays the Clark Center (7:30 p.m.; all ages; $39 to $44 at clarkcenter.org/shows/led-zepagain/). "It's as close as you'll ever get to the real deal!" said Led Zeppelin guitarist Jimmy Page. 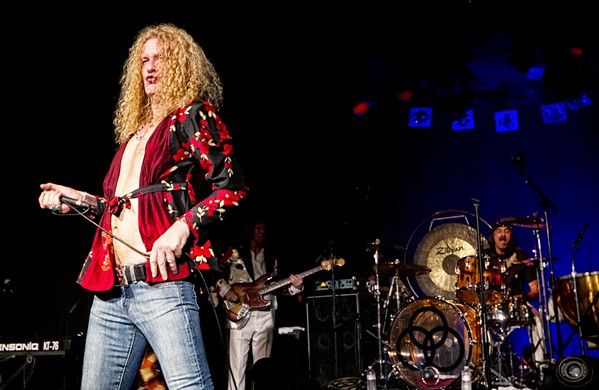 "From the high-energy electric classics to the beautiful acoustic works, you will be mesmerized as Led Zepagain resurrects Page's soaring guitar leads, Jones' brilliant keyboard passages, Bonham's trademark pounding rhythms, and the signature Robert Plant vocals," according to press materials. "As you experience immortal classics 'Stairway to Heaven,' 'Immigrant Song,' 'Whole Lotta Love,' and 'Black Dog,' you'll understand why Led Zepagain has become highly regarded as the most authentic representation of Led Zeppelin in the world today."

Local alt-rock act Carbon City Lights will play Harmony Cellars on Friday, Oct. 8 (4:30 to 6:30 p.m.; free) and Sea Pines Golf Resort next week on Saturday, Oct. 16 (2 to 6 p.m.; free), and their lead singer has some breaking news. "I got cast on this season of NBC's TV show, The Voice, and got to audition for Blake Shelton, Ariana Grande, John Legend, and Kelly Clarkson," Michael Venia explained. Congrats, my man! Good luck! 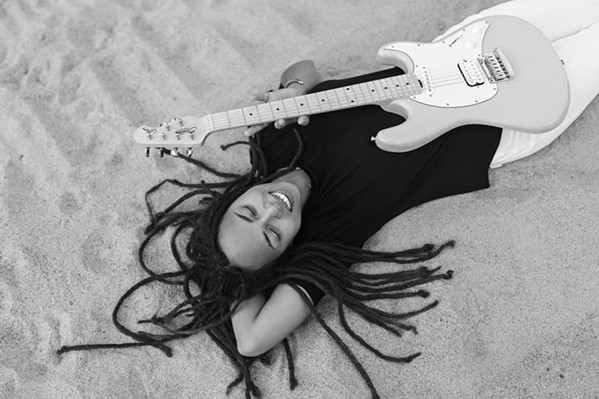 Earthy, soulful singer-songwriter Crimson Skye will play Paso Robles' Broken Earth Winery this Saturday, Oct. 9 (1 to 4 p.m.; free). She has a terrific new album, The Far Side, with songs that will burrow into your ears and soul. Δ