With no water to save Dairy Creek Golf Course, El Chorro Regional Park is in for major changes

The water crisis at Dairy Creek Golf Course in El Chorro Regional Park is so dire right now, only its greens can afford to be green. Everything else is dry and brown, blending in almost seamlessly with the surrounding Chorro Valley. 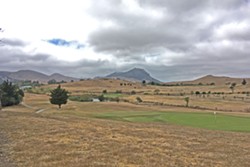 Three months have passed since the county-owned course received its last allocation of water from the state-owned California Men's Colony (CMC) prison until December. The remaining water sits in three storage ponds, judiciously used by Dairy Creek staff to help maintain at least a semblance of what was once considered one of the top public golf courses in the state.

Designed by renowned golf course architect John Harbottle and opened to the public in 1997, Dairy Creek was lauded for its innovative design, picturesque setting, and professional level of difficulty.

"The course is not only a place to play golf, but a piece of art," Kradduck told New Times.

But Dairy Creek's water supply—reclaimed water from the neighboring CMC—depends on the prison having a steady population. When California passed prison re-alignment in 2011, the number of inmates at CMC started to decline. Dairy Creek's water supply—the lifeblood of a golf course—did the same. CMC's conservation measures during the drought compounded the shortage, and by 2016, the county was receiving less than half of what it needed.

Today, amid record-low playership at Dairy Creek (down nearly 50 percent from prior years), the entire SLO County golf enterprise is in financial peril, needing help from the general fund to stay afloat, with $5.2 million of a bond still left to repay.

As a result, Dairy Creek and El Chorro Regional Park won't look the same in the future.

"[The community] is showing us that a brown golf course is not desirable," said Josh Heptig, the county golf course superintendent. "Unfortunately, we've got to make some changes."

What will happen if Dairy Creek's temporary storage ponds are drained before December?

"Nothing," the county Board of Supervisors said on June 6 when it decided not to augment the course with Whalerock Reservoir water, a drinking water source that three supervisors didn't want to use for golf fairways after the devastating drought.

"Sometimes, you have to cut your losses and say, 'We need to re-evaluate what we're doing,'" 4th District Supervisor Lynn Compton said at the meeting before casting the deciding "no" vote. Compton's words were devastating to the local golfers who packed the chambers that day to defend the course.

The county's new plan is to convert Dairy Creek to a nine-hole course. The back nine holes will remain, while the front nine will be used to accommodate a bigger driving range and possibly a three- to five-hole practice facility—if Cal Poly wants to provide the water and other resources, Heptig said.

He said Dairy Creek could benefit from the county-owned well on site currently shared with CMC. The well could be the difference between a completely green course and a course that looks more like the current one.

"It will take a lot of political negotiations for us to be able to use that water on the golf course," he noted.

Dairy Creek would also be rebranded to a "grow-the-game" facility, as Heptig called it, welcoming all skill levels of golfers. While that might make a veteran player wince, Heptig said Dairy Creek's nine holes would differ from the typical "pitch-and-put" nine-hole facilities, like SLO's Laguna Lake Golf Course, since it would include holes that are par 3, 4 and 5.

While nine-hole courses generally don't perform as well financially as 18-hole courses, the county plans to beef up the other offerings at El Chorro Regional Park. Several new facilities are on the docket, like more campgrounds (including cabin camping), multi-use trails, an event and concert center, a Go-Cart racing track, batting cages, a mountain biking course, disc golf, and a zip line. The overall vision is to boost park attendance and profits by making it inclusive to the entire community.

There isn't a timeframe for the transition, according to Heptig, though he said Dairy Creek will remain at 18 holes at least through the winter.

For many golfers, acceptance has replaced resistance. When the county surveyed Dairy Creek players last year, less than 25 percent indicated they would be willing to play a future nine-hole course. But in a more recent survey, 60 percent admitted they would.

"There's a little bit of reality that's setting in," Heptig said. "We're hearing, 'We really love Dairy Creek, and if this is the way it's going to have to be, we still want to play it.'" Δ