With stimulus check in hand, we're ready for a night off from cooking—time for Kochi Korean BBQ to go

Photos By Beth Giuffre WHAT'S IN YOUR FRIDGE? Kochi takeout night may be added to our occasional (now more frequent while sheltering at home) "dinner and a show" night: We put a tablecloth on our coffee table and eat in the living room with an agreed-upon movie. Most recently we watched National Geographic's A Cheetah Story. Spoiler alert: Predator scenes are not dinner-friendly.

Order and pay for pickup or delivery online at toasttab.com/kochi. Yelp.com has a coupon for buy two entrees, get one free appetizer. Kochi Korean BBQ & Shabu Shabu is located at 6900 El Camino Real, Atascadero. Call (805) 464-2999. Shelter-at-home hours are 1 to 8 p.m. daily.

Never in my life have I complimented someone on their mask on a day other than Halloween, but Jenny Kim, one of two general managers of Kochi, had my ultimate respect. Kim's was the cutest mask I'd seen yet: white cloth with little pink flamingos. Plus, our two steaming piles of to-go boxes were wrapped in plastic bags, waiting indoors on a table, on time ... to the minute. Bringin' home the bacon was sure easy today.

When I walked up to pick up my order, I was met with a hand-written sign on the glass door that read, "STOP. Please wait. We will bring food out here. Thank you!" 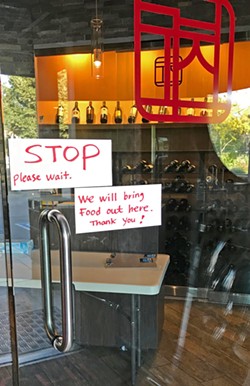 I could see owner/chef Austin Kim cooking far off in the window, overlooking more than 1,000 square feet of empty restaurant tables (no doubt a first since he opened Kochi in 2016 with Jenny, his sister).

In less than a minute, a smiling, upbeat Kochi employee saw me there, handed me the bags of food, and off I went. I had already paid and tipped online, so this transaction was faster than checking the mailbox.

Normally, we would be waiting at the host stand for a table, thinking about the many fun places to sit at Kochi (the convivial sushi bar, maybe a spot close to the Kids Zone for a side dish of preschool laughter, or perhaps in a booth in proximity to a screen—our usual favorite).

Jenny Kim was juggling the phone orders when I came in to pick up my to-go food on April 21. I parked my minivan in the empty lot—which usually has only one space left—and walked up to the one restaurant in Atascadero that pleases every single member of my five-person family. I haven't counted the items, from sushi rolls to ramen to rice bowls, but I'm pretty sure there's close to one dish for every member of Atascadero's population.

Kochi is a Korean barbecue and shabu-shabu restaurant that shares a big building with Kai Lana sushi. In A-town, Kochi is wildly popular among locals and travelers alike, and it maintains a respected stature similar to the Colony Square Rotunda—it's a darn staple!

So when I received my stimulus check, I felt obligated to spend it within our local economy, on a place that's part of our family in a way. Especially since the Kims had to furlough 25 employees since the shelter-at-home mandate. Kochi is our birthday treat place. It's our date night place, and it's our place for a night out on the town.

"It's really sad not to see our employees and not hearing from them on a daily basis," Kim said. "We do certainly miss them. 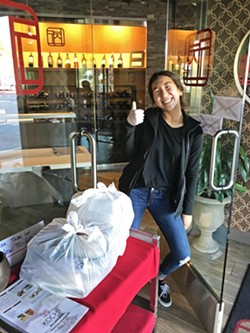 "We're only working with less than seven employees," she said. "Just trying to get by during this hard time, but we have a very supportive customer group."

Kim said they've never done "to-go" like this before, and she was unnecessarily apologetic.

I spoke to Kim later on the phone. She'd been working a full plate at the restaurant four to five hours a day on top of her day job, which is leading three affordable housing building projects in Atascadero. She is also the mother of two children, ages 5 and 7, both now schooling at home due to shelter-at-home.

Apparently business was really slow at Kochi the first two weeks, but lately it's been picking up; Kim guessed maybe because people are running out of food, or tired of their cooking, or maybe they received their stimulus checks.

"We're doing OK," Kim said. "We're not a big to-go restaurant. We're more of a fine-dining and family-dining, however, this is all new to us, trying to do the delivery and to-go, trying to accommodate our customers."

I must say Kim is one of the most empathetic people I know. She is the only person since the quarantine who asked me how New Times is doing. Being a business person, a parent, and an involved community member, she sees the socioeconomic impact as well as the psychological.

"I do see why the government has a concern of opening up the economy," she said. "We are suffering tremendously with unemployment and social problems arising with domestic violence at home—being stressful, and depression, and increasing suicidal rate—all of that combined is like a domino effect."

Yet, she said, there is fear in uncertainty.

"Not knowing when and what's going on. It actually creates a lot more than losing jobs. It's kind of like a world threat everywhere. We're doing what we're doing. At least we're providing food, so hopefully, they feel comfort. I can't complain.

"We're grateful our customers still haven't forgotten about us and keep coming, circling back," she continued. "We don't see all the customers, but we see quite a few of our regulars. At least we communicate that way, even though they're not coming in and dining. We still greet them at the door."

Kim said she thinks social distancing has gone well in our county.

"Compared to anywhere else in California, we're doing pretty good, but we just have to continue to be very careful."

As in many places, this has been a financial hit for Kochi and its employees. She worries about a recession as a result.

"Sooner or later I'm sure we'll open back up, but the question is, how will our life be after?" she asked.

"But we gotta do what we gotta do. We gotta stay strong and be optimistic," she said, letting out a big breath. "And take it one day at a time, right?"

Kim said they are checking their food ingredients constantly for a new method of ordering around the clock. This is more work, but less waste.

"Because we're not as busy as before, we just order a small quantity of food from our vendors and suppliers so we keep the fresh ingredients all around—instead of ordering a large bulk of food twice a week, now we order more frequently," she said. "We're just thankful that our vendors are willing and able to deliver small, with a quick turnaround every other day."

Kim said for anyone ordering to-go at this time to order online if possible. She is spending most of her day fielding calls from community members who aren't very tech savvy. It is easier and more efficient online.

"I'm pretty much on the phone all day and the evening," she said. "We're still trying to accommodate our lunch specials, especially for the ones who can't really work. A lot of people don't have much income, so we're just hanging in there, until hopefully we can open back up." Δ