Although Morro Bay still hasn't decided where to put its controversial water facility, the city is in the running for an $82 million federal loan to partially fund it.

The city was one of 12 municipalities nationwide selected by the U.S. Environmental Protection Agency (EPA) to apply for a Water Infrastructure Finance and Innovation Act loan. In California, the Central Coast city is competing against San Francisco, Orange County, and San Diego. The opportunity comes at a time when the Morro Bay City Council voted to put its project on a two-month hold, because it's reviewing a project site that was already denied by the California Coastal Commission in 2013.

But Public Works Director Rob Livick said the city wouldn't be looking directly at the original site on Atascadero Road, rather it's eyeing a location in close proximity. 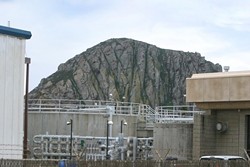 Morro Bay has a year from the EPA's July invitation to apply for the loan to figure out the project site and a firm project description. Michele Huitric, an EPA media consultant, told New Times via email that Morro Bay was chosen because its water project aligned with loan parameters.

"All projects were evaluated following a selection framework outlined in the Water Infrastructure Finance and Innovation Act, established by Congress in 2014, which requires an assessment of letters of interest by performing an eligibility screening, a preliminary creditworthiness assessment, a preliminary engineering feasibility analysis, and an evaluation of the selection criteria," she said.

Among the contenders in California is the San Francisco Public Utility Commission with a loan in the amount of $625 million to renovate its existing 60-year-old facilities nicknamed "city under the city." The combined water facilities—North Point Wet-Weather Facility, Oceanside Treatment Plant, and Southeast Treatment Plant—collect and treat sewage and storm water runoff.

The city of San Diego and its Pure Water Program was selected to apply for a loan of $492 million. Its $1.2 billion facility and multi-year program are slated to produce 30 million gallons of treated drinking water from the Miramar Reservoir that sits adjacent to its North City Water Reclamation Plant. It will produce filtered recycled water for drinking and reduce the city's need for imported water.

The Orange County Water District was also invited by the EPA to apply for a $124 million loan for its Groundwater Replenishment System. The project expands the county's existing water recycling plant, which treats and supplies 100 million to 130 million gallons a day. The project calls for adding another 31,000 acre-feet of water supply each year that will reduce the amount of imported water from the Delta in Northern California and the Colorado River.

Morro Bay is looking to supply its 10,600 residents with advanced wastewater treatment water by building a new facility, something that's been in the works since 2013 and had been proposed at three separate sites, including where its current facility stands now (part of the project proposal denied by the Coastal Commission in 2013, which the city is now revisiting as a potential option). During the July 11, 2017, City Council meeting, members received a last-minute letter from the Coastal Commission Director Dan Carl reiterating the commission's stance on the original site.

"We are frankly shocked that the city would be considering such a radical change in strategy without even consultation with Coastal Commission staff, especially given the commission's prior denial of a coastal permit for the city's prior plant project at the current plant site in 2013 ... ," the letter stated.

Carl told New Times that the commission was disappointed at the hiccup in the progress of the project.

"That site is problematic, we're talking about a significant investment in public funds and in critical infrastructure. That's something that the commission is looking very hard at in this new era of sea level rise and climate change where shoreline hazards are only going to be exacerbated where that site currently has problems," he said.

The city will also be looking into past proposed locations that include the Righetti property north of Highway 41 and the Giannini property near Hillcrest Drive, east of Highway 1.

Not only does the city need to figure out a definitive plan to move the project forward, Livick said, but it also needs to get off the old operational permit.

"We'll go to a hearing probably in December for a new discharge permit," he said, adding that there will be a time component proposed "that gives us a limited amount of time to complete that facility wherever that facility is."

Livick told New Times that utilizing the original site could save the city about $40 million.

If chosen, the EPA loan would fund about 49 percent of the project. Livick said the other 51 percent would come from grants and State Revolving Fund financing, and the last resort would be issuing municipal bonds.

Livick said grants and loans are very competitive, and a project must go above and beyond the bare minimum requirements to receive them.

"With our conversations with the regional [water] board, we understand that just doing what's basically necessary is probably not any project that will garner any outside financing," he said. Δ